Rural Americans’ Internet use has grown, but they continue to lag behind others

Internet penetration has grown in rural communities, but the gap between them and suburban and urban communities has remained constant over time.

The Project found in survey data collected between March and August 2003, suburban and urban residents remain more likely to use the Internet:

Statistical analysis that examines the principal drivers for Internet penetration suggests that some differences in Internet adoption between rural areas and other locales are driven by patterns among low-income rural individuals.  Living in a rural area in itself has little or no influence as to whether one goes online.  However, low-income people in rural areas are less likely to be online than low-income people living in urban or suburban areas.  Middle and upper income people in both rural and other areas are equally likely to be Internet users.  At the same time, some of the gap between rural areas and the rest of the country can be explained by other demographic realities such as the fact that rural residents as a group are older, less wealthy, and have lower levels of educational attainment than those in urban and suburban areas.

Rural Americans are older and less wealthy than those in other parts of America and that may account for some of the difference in Internet penetration between community types.

Senior citizens (those 65 and older) account for a relatively larger percentage of the rural population (22%) compared to the urban (14%) and suburban populations (16%). In rural areas, seniors are unlikely to go online. Only about 17% of rural seniors go online, making up about 6% of rural Internet users. Meanwhile, rural areas hold comparatively fewer young adults, the most likely age group to go online. The age of the rural population may be one major reason why penetration rates are lower in rural communities.

Another factor in lower Internet penetration may be that many rural residents say they have less choice than others about the way they access the Internet.

About 29% of rural Internet users say the Internet Service Provider they use is the only one available to them.  In contrast, 7% of urban users reported a single ISP, and about 9% of suburban users were serviced by a lone ISP.

Broadband adoption is growing in urban, suburban, and rural areas, but broadband users make up larger percentages of urban and suburban users than rural users.

A portion of rural Internet users depend on Internet connections at places other than work or home. They are more likely than suburban or urban users to say they depend on another place for going online.

Some 22% of Internet users say they go online from at least one other place besides work or home. In some cases, though not most, the people who go online in a third place depend on that connection as their exclusive point of access. Some 8% of rural users say they only log on to the Internet from some place other than work or home, such as a library, a school, or a friend’s house. Just 3% of suburban users do and 5% of urban users depend on some place other than work or home for their Internet connection.

Rural African-Americans are significantly less likely than rural whites to go online, possibly because of differences in income and education.

Rural users pursue many of the same online activities as urban and suburban users, but they are more likely to look for religious or spiritual information and less likely to engage in transactions.

Compared to their urban and suburban counterparts, rural users:

Rural Internet newcomers are wary of technology, but those with experience embrace it.

Rural newcomers are more likely to hold mixed feelings about computers and technology than are urban and suburban newcomers. Fully half of rural residents say that they hold “mixed feelings” toward computers and technology, whereas 32% of urban users say this and 27% of suburban users say this. But rural users with some experience with the technologies are more likely than others to say they like them. 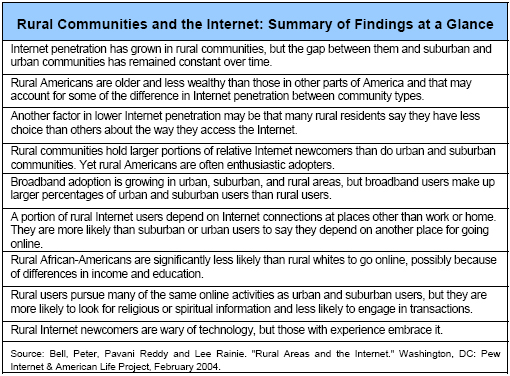 Next: Part 1. Rural Internet Access: Deployment and Availability
← Prev Page
You are reading page1Page2Page3Page4Page5Page6Page7
Next Page →