Internet penetration continues to be unevenly distributed across the country.

The Pew Internet & American Life Project has tracked the growth of Internet usage in the United States, from just under half of American adults in 2000 to about 59% of adults at the end of 2002. These statistics have continually shown that Internet penetration in the United States has been and continues to be uneven. We have discussed in other reports why this growth has not been evenly distributed among those in various racial and ethnic groups, those of various ages, and among those with different levels of education and income. This report explores the reasons behind the uneven distribution of Internet penetration by geographical region.  And it looks at variations in use of the Internet by region. The following table outlines the disparities in Internet penetration among 12 regions of the country in 2002. (California is considered separately because Internet access and use vary dramatically from neighboring states.) 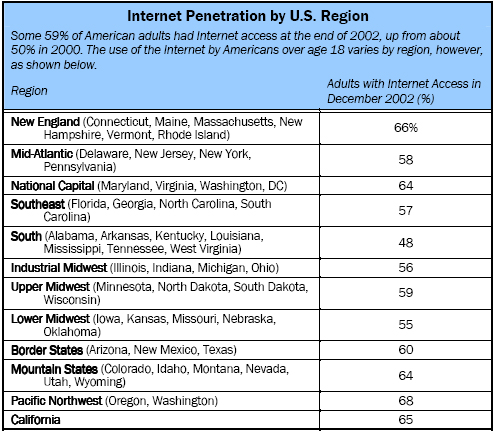 There are several notable variances among regions:

Regional variations in Internet use reflect differences in education and income levels.

California, the National Capital region, and New England have large populations of wealthy, highly educated people. No surprise, then, that these regions are among the most highly wired regions in the country, with 64%-66% of adults online.

At the other end of the scale, the South has the lowest household income and education levels among its overall population compared to other regions and therefore it has the lowest level of Internet penetration among adults.

There are some exceptions, though. Both the Mountain States and the Pacific Northwest have large user populations even though they have proportionally fewer people with high household incomes and college degrees.

There are some interesting differences between the regions in the demographic makeup of their Internet populations. Some of these differences are to be expected, but several are somewhat surprising:

Some online activities such as email are universally popular, but others, including online shopping, are favored only in certain regions.

Some online activities are universally popular across the country. These include using email, going online for hobby information, and using search engines to seek basic information. However, some online activities are favored more in some parts of the country than in others. Internet experience levels play an important role in these regional variations: more experienced users are more purposeful in their Internet use and less likely to browse for fun. Some highlights:

Experienced Internet users throughout the country log on more often during the day but limit their time online.

There are some national trends in the way people use the Internet on a daily basis. In particular, experienced users nationwide are more likely to go online on any given day and they tend to go online more often during the day, but they are also likely to limit their online time. There are also some slight variations in Internet usage in different regions of the country, however, and these relate primarily to where people log on (home versus work) and how regularly they use the Internet:

Each region has its own online character.

There are proportionally fewer young adults (ages 18-24) online in New England (Connecticut, Maine, Massachusetts, New Hampshire, Rhode Island, Vermont) but proportionally more men than women (55% of Internet users) than in other parts of the country. Overall, online New Englanders are wealthier and more educated than the national average. New Englanders are among the most likely in the nation to go online on an average day, and they like to buy things online. At the same time, however, they are among the least likely to report that the Internet has helped their ability to shop. New England’s Internet users are also more likely to have gone online to try to find the answer to a question — 89%, which is a higher proportion than in any other region of the country.

Growth in Internet usage among adults in the Mid-Atlantic (Delaware, New Jersey, New York, Pennsylvania) leveled off between 2001 and 2002, staying at 58% for both years. (This still represents notable growth from 2000, when 51% of adults used the Internet.) This region has the highest proportion of female Internet users (54%) of any in the country. A high proportion of Mid-Atlantic users have college or graduate degrees (38%). Online residents of the Mid-Atlantic like to use the Internet to look for hobby information and are more likely to shop online than those in most other parts of the country. They also enjoy surfing the Web, but are not as likely as those in other regions to turn to the Internet for answers to specific questions.

About 52% of those who use the Internet at work connect on an average day, the greatest proportion of workplace access of any region. Conversely, the region has the lowest rate of daily home Internet use. These users are more likely than their peers elsewhere in the nation to get news online, look for financial information, or seek help with their health. But they are the least likely to look up answers to questions.

This region’s Internet users are probably the most enthusiastic in the country about the impact of the Internet on their lives.

The user population in the Southeast (Florida, Georgia, South Carolina, North Carolina) is an interesting mix of Web veterans and novices. This region has one of the more racially and ethnically diverse user groups in the country.

On an average day, 80% of those who go online in the Southeast do so from home—one of the highest rates of daily home access in the country and second only to the Pacific Northwest. These users feel more strongly than most others that the Internet has been a boon to their relationships with family and friends. They are among the least likely to shop online. And they are the least likely to look for information about hobbies online.

The South (Alabama, Arkansas, Kentucky, Louisiana, Mississippi, Tennessee, and West Virginia) has the lowest rate of Internet access of any region in the United States and is the only region with fewer than half of adults online (48% of Southern adults used the Internet as of 2002). In just about every demographic category, including income, age, and education, Southerners are less likely to use the Internet than their peers. However, the region has a large proportion of African-American users (14% of those in the South who use the Internet are black, compared to the national average of 8%). The act of surfing the Web just for fun is quite popular among users in the South, as is getting news online. And users in the South are the most likely in the nation to have sought health information online. Southerners are split on whether or not the Internet has been a benefit to their relationships, especially with family.

Internet usage in the Industrial Midwest (Illinois, Indiana, Michigan, Ohio) grew only 1 percentage point between 2001 and 2002, after a 6-point increase between 2000 and 2001. Even so, this region has one of the largest cohorts of novice users (those with 6 months or less experience) in the country. A slightly higher proportion of women than men in the region use the Internet.

Users here are firmly in the middle when it comes to most of the popular Internet activities. And they are fairly reserved when asked whether the Internet has improved their quality of life in specific ways, such as shopping, managing finances, or pursuing a hobby. Only 27% said the Internet has helped them improve relationships with family members – one of the smallest percentages in the country. They are more apt to give the Internet credit for helping them keep in touch with friends (55% say it has helped a lot or somewhat).

Adult Internet use in the Upper Midwest (Minnesota, North Dakota, South Dakota, Wisconsin) has grown strongly and steadily, from 49% in 2000, to 55% in 2001, to 59% in 2002. This region has the largest percentage of users with 1-3 years of experience online.

Users in this region are more educated than the national average, and a high proportion are aged 35 to 54. However, the region has one of the nation’s smallest proportions of younger users (aged 18 to 24).

Upper Midwesterners are much less likely than other Americans to credit the Internet with making improvements in their lives. They are even lukewarm about the Internet’s impact on improving their connections with family and friends.

The Lower Midwest (Iowa, Kansas, Missouri, Nebraska, Oklahoma) has the highest proportion of low-household income users of any region in the country and the highest proportion of seniors. Yet these users as a group are more educated than the national average. Lower Midwesterners are among the most ready consumers of online news and are the most likely of any in the country to go online “just for fun.” Like their neighbors peers in the Upper Midwest, this group of users tends to be lukewarm in their assessment of how the Internet has improved their lives.

The Border States area (Arizona, New Mexico, Texas) is one of the most wired regions in the country. There is an interesting mix of users who are wealthy and users who earn modest incomes, but in general, these Internet users have less education and lower household incomes than the national average. Like California, the Border States region has a high concentration of Hispanic users.

Users in the Southwest are among the most likely to get news online. They are also more likely to use the Internet for job research than those in other parts of the country. Those who go online here are very enthusiastic about the positive effects of the Internet on their lives.

This region is one of the most wired in the country with 64% of adults online, and Internet users in the Mountain States (Colorado, Idaho, Montana, Nevada, Utah, Wyoming) are among the most experienced online. The Mountain States have the highest rate of home access to the Internet of any region in the country. The region has one of the smallest proportions of wealthy Internet users and a user population with average education levels. The region has the largest proportion of female users and one of the smallest cohorts of African-American users.

Except for email, users in the Rockies tend to engage in the most popular online activities with less frequency than their peers nationwide.

The Pacific Northwest (Oregon, Washington) has been the most wired regions in the country for years. In 2002, fully 68% of adults were online. The region also has one of the largest cohorts of older users (aged 55+).

The region’s Internet users are experienced and are efficient when they are online – they are most likely to spend thirty minutes or less online on an average day than are users in other parts of the country. They are also less likely than their peers elsewhere to engage in many of the Web’s more popular activities, with the exception of email.

California’s Internet users make up one of the most experienced regional user populations in the country. They also include the nation’s largest proportion of minority users (38% of the Internet population in the state). This figure includes the highest proportion of Hispanic Internet users in the country. At the same time, users in Californian are among the wealthiest and most educated in the country. California is particularly well served by high-speed Internet access and leads the nation in the use of broadband. Californians are the most likely in the nation to buy something online as well to seek hobby information online.

Note: There are two data spreadsheets available with this report:

Next: Part 1. New England
← Prev Page
You are reading page1Page2Page3Page4Page5Page6Page7Page8Page9Page10
Next Page →