New England is one of the most wired regions in the United States, but there are proportionally fewer young adults online here than elsewhere.

New England is one of the most wired regions in the United States, with 66% of adults online. Internet users in the six New England states (Connecticut, Maine, Massachusetts, New Hampshire, Rhode Island, Vermont) stand out against those in other regions of the country for several reasons:

There was a significant increase in the percentage of New England adults online and the region continues to be among the most wired in the country.

New England has one of the country’s most experienced user populations. About 45% are Web veterans with more than 3 years’ online experience, and 36% have two or more years online. About 19% have a year’s experience or less. The proportions of users in New England with lots of experience are in line with the national proportions. Nationally, about 44% of users have more than three years online, and another 34% have two or more years on the Internet. Only a few regions of the country (California, the Capital Region, the Pacific Northwest and the Mountain States) have a higher proportion of veterans. About 5% of users in New England are Internet rookies with less than six months of online experience, and only the Capital region has a smaller proportion of Internet rookies.

The New England user population is predominantly white (86%). Meanwhile, Hispanic4 users have the largest minority presence in New England, at 7% of all Internet users; African-Americans represented only 1% of users. Black New Englanders are also much less likely to use the Internet than blacks nationwide – in New England, just over a third (34%) of blacks use the Internet, compared to 42% of blacks nationwide. Nationally, Hispanics make up about 9% of the user population, while African-Americans constitute another 8%.

The gender ratio of New England users sets the region apart from other regions in the United States. The national ratio of male to female users, about 50-50, is the same as the ratio in most regions in the country. But New England has a much higher proportion of men users than women. About 55% of those going online are men; 45% are women. The region with the next highest proportion of men to women is the Southeast, whose user population is 52% male. At the same time, the gender gap that exists nationally between men and women accessing the Internet (59% of men have gone online, as have 54% of women) is amplified in New England. While 55% of women in New England use the Internet, 62% of men there have done so.

In terms of age, the largest proportion (30%) of Internet users in New England is at the beginning of the prime earning years, between 25 and 34. An additional 26% are between the ages of 35 and 44, 20% are between 45 and 54, 12% are over the age of 55, and about 12% are young adults between 18 and 24. For the most part, these proportions are similar to the national average. However, New England has the smallest proportion of younger users. Nationally, young adults between 18 and 24 make up 17% of the user population, some 5-percentage points higher than the proportion of young users in New England (12%). In comparison, the proportion of younger users in California is almost twice (20%) that of New England. Younger adults in New England are also the more likely than their peers to be online – in the 25-34 and 35-44 age brackets, New Englanders are about 10 percentage points more likely to be online, led by 81% of 25-34 year olds.

When New Englanders go online, they like to engage in many of the same activities as users in other regions.

One activity that New Englanders like to do more often than other users, however, is buy things online. About 55% of users in New England have bought a product online, compared with 45% of users nationally. Only Californians (53%) share as much excitement for online shopping as New Englanders. By comparison, those in the Midwest take the opposite tack, with only 37% having shopped online.

About 89% of the New England user population use email, which is the Web’s most popular activity. This is little different from the 88% of users nationally who have email accounts. Meanwhile, 58% of users in New England have gotten news online; about 35% have looked up financial information; about 58% have sought health information on the Internet; 45% have done research for their job; 81% have looked for information on a hobby; about 62% just enjoy being online for no particular reason; and 89% use the Internet to answer a question.

Many American Internet users (75%) turn to the Internet to look up answers to questions, but users in New England are more likely than users in any other region to do so. While about 89% of users in New England have done this, only about 70% of users have done so in the Capital region, the region with the lowest rate. The other regions of the country fall between 72% and 80%, and the Pacific Northwest (80%) is the only other region where at least 80% of its users use the Internet for this purpose.

Getting hobby information is another activity that is relatively more popular in New England than elsewhere. While this is a popular activity across the country (78% of users nationally have done this), New England (81%), California (83%), and the Mid-Atlantic (81%) are the only regions where more than four-fifths of users have looked for information about their hobbies in cyberspace.

New Englanders are among the most likely to go online on a typical day.

New Englanders are slightly more likely to connect from work, but a high proportion of home users have cable modems.

The two places from which users across the country are most likely to connect to the Internet are the home or the workplace. In both instances, users in New England connect at about the same rate as users nationally. About 87% of users in New England go online from home, while 52% have done so from work. Nationally, 86% of users access the Internet from home, and about 50% do so from work. However, users in New England are more likely to have home access than those in the Midwest, the region with the lowest rate of home access, where about 82% have gone online from home. At the same time, New Englanders are more likely to have work access than those in the Pacific Northwest, where about 46% have gone online from the job.

New Englanders are about average in the amount of time they spend online.

The amount of time New Englanders spend online on a typical day and the number of times they access the Net on any given day are in line with findings for users across the country. About 38% of users in New England say they go online several times a day, the same as the national average. About a quarter of New Englanders (24%) go online at least once a day, about 17% access the Internet at least 3 to 5 times a week, about 13% go online one to two times a week, and about 6% go online less than once a week.

There were a few changes, both upward and downward, in Internet usage in New England between 2000 and 2001.

In terms of the makeup of the Internet population of New England, the most significant change was the gender breakdown – in 2000, it was 50-50 men to women, but that changed to 55-45 men to women in 2001.

New Englanders also engaged in some activities online in 2001 less than they did in 2000. For instance, users in the Northeast were less inclined to look for financial information as well as perform research for their job on the Internet. At the same time, there was a slight up tick in the percentages of those seeking hobby information or answers to questions.

There were also some small changes in usage patterns between 2000 and 2001. The most notable is that users in New England spent slightly less time online in 2001 than they did in 2000, which is a pattern that has been traced in the Pew Internet Project report, “Getting Serious Online” (https://www.pewresearch.org/internet/Reports/2002/Getting-Serious-Online-As-Americans-Gain-Experience-They-Pursue-More-Serious-Activities.aspx).

The table below lists the top five Web sites in Boston in April 2003. Those sites are also the top five in the nation and they do not vary much region-by-region. In addition, the table highlights several regional sites that are in the top 25 most heavily used sites in the region during that month. A full listing of the top 25 sites in the region can be found in the spreadsheet that is available here: https://www.pewresearch.org/internet/releases/release.asp?id=66 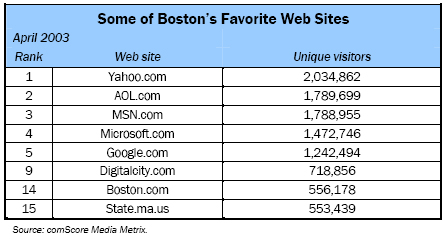 Next: Part 2. The Mid-Atlantic
← Prev Page
Page1You are reading page2Page3Page4Page5Page6Page7Page8Page9Page10Page11
Next Page →