The population of Internet users has grown strongly in the Southeast in recent years.

Once one of the less-wired regions in the United States, the Southeast has seen strong growth in Internet usage among adults. Internet users in the four states in the region — Florida, Georgia, North Carolina, and South Carolina — stand out in comparison with those in other regions of the country for several reasons:

Users in the Southeast comprise an interesting mix of Web veterans and rookies, but match the national profile for education and income.

The Southeast region has one of the more racially and ethnically diverse user groups in the country. Internet users in the Southeast include slightly more men and seniors.

Internet users in the Southeast include slightly more men and seniors.

In age, the Southeastern user population closely resembles the breakdown of the national user population. About 15% of Southeasterners using the Internet are young adults between the ages of 18 and 24; another quarter are between 25 and 34; about 27% are between 35 and 44; 19% are between 45 and 54; and about 14% are over 55. Of the 14% of users above 55, about 5% are senior citizens over 65. Compared with other regions of the country, the Southeast has a large proportion of seniors online. Interestingly, young adult users between 18 and 24 are relatively less likely to use the Internet than other adults their age around the country.

About 65% of users in the Southeast hold down full-time jobs, which is about the same as the proportion of users nationally (64%). Another 11% have part-time jobs. Also, about 7% of Southeasterners online are retirees.

Southeasterners enjoy most popular online activities, but are less likely to use the Internet to answer questions. When Southeasterners go online, they enjoy many of the same activities as other users across the country. One difference, however, is that they seem less likely than their peers to turn to the Internet when they need to answer a question. Performing an Internet search to answer a question is one of the Web’s most popular activities, something that 75% of users across the country have done at one time or another. Some 73% of users in the Southeast have done so. In contrast, users in New England are much more likely to have done so – fully 89% have performed an Internet search.

Using email is the Web’s most popular activity – almost nine in ten users (88%) across the country use email. This enthusiasm for emailing is shared by users in the Southeast – 89% have sent or received an email. Also, about 59% of users in the Southeast have gotten news online; 38% have sought financial information; about 56% have looked for information about health-related matters; about 43% use the Internet for research at their job; 73% have gone online to look for information related to their hobby; about 61% have gone online “just for fun”; and 42% use the Internet to buy something.

Compared with users in other regions, Southeasterners to tend to favor some activities online more than others. Shopping online is frequently touted as a common Internet activity, but only 45% of users nationally have done this. The 42% of Southeasterners who have bought something through a Web site represent one of the smallest proportions of any region in the country. Only users in the Upper Midwest (37%) and the Midwest (36%) are as unlikely to have shopped on the Net. This is probably because shopping online is most often an activity of veteran Internet users, and these three regions have proportionally more new users than other regions of the country. The region with the highest proportion of Web shoppers, New England (55%), also has a high proportion of veteran users with more than three years’ experience online.

Looking for information online related to a hobby is one of the Web’s most popular activities – fully 78% of users nationally have done this. However, at 73%, the proportion of Southeastern users who have looked for hobby information online gives the region the lowest proportion of hobby seekers of any in the country. By comparison, 83% of users in California have included the Internet in the pursuit of their hobbies.

Users are more likely to log on from home than those in other parts of the country.

About four out of five users (82%) in the country use a standard phone line when they connect to the Internet from home. About 5% have a DSL line, and about 10% have a high-speed cable modem. Users in the Southeast connect from home in much the same proportions – 81% use a standard dial-up connection, about 5% have DSL, and 10% use cable modems.

Nationally, about 86% of users log on from home, while about 50% have done so from their place of work. In the Southeast, users are slightly more likely to have home access – 87% of users said they had logged from home at one time or another. Meanwhile, about 49% of online Southeasterners use the Internet at work.

The number of times per day and the amount of time spent online on a typical day by users in the Southeast are similar to the national averages. About 34% of Southeasterners go online several times a day; an additional 30% go online about once a day (this is the highest proportion of any region in the country). An additional 17% log on about three to five times a week; about 10% go online once or twice a week; and about 6% use the Internet less often than that. Nationally, about 37% of users log on several times a day; about a quarter (26%) go online at least once a day; about 16% use the Internet three to five times a week; about 12% log on once or twice a week; and 6% go online less than weekly.

When users in the Southeast go online on an average day, about 58% of them will spend an hour or less in cyberspace. About 23% will stay on for thirty minutes or less, while 35% will spend between thirty minutes to an hour online. An additional 10% will spend between one and two hours online; 15% will spend two to three hours on the Web; 6% will stay online for three to four hours; and 11%, the heaviest users, will stay logged on for four or more hours. All of these proportions are similar to the national averages.

Southeasterners find the Internet valuable in keeping in touch with friends and family. In March 2000, users were asked several questions about the extent to which the Internet had helped them improve aspects of their daily life – shopping, getting health information, managing their finances, connecting with family and friends, learning new things, and pursuing a hobby.

Users in the Southeast are pretty sure about one thing: The Internet has been a boon to their relationships with their friends. About 41% of users said that the Internet had improved connections to their friends “a lot.” An additional 25% said they had seen “some” improvement. The 41% who had seen “a lot” of improvement represent the largest proportion of users to say so of any region in the country, and that figure is 7 percentage points higher than the national average.

Southeasterners are just as enthusiastic about the Internet when it comes to their connections to members of their family. About 36% said that the Internet improved connections to their family “a lot,” compared with 31% of users nationally. An additional 20% said they had seen “some” improvement; 24% of users nationally said the same thing. The 36% of Southeasterners who felt that the Internet had been a significant boon to their family relationships represent the second highest proportion of any region in the country to say so, trailing only the 38% of users in the Mountain states who said the same thing.

Going online to look for health-care information is one of the more popular Internet activities. It has been established in several Pew Internet Project reports that online health information has been a boon to many users and has helped people make important health-care decisions. Users in the Southeast wholeheartedly agree. About 43% of Southeastern users said that the Internet had improved a lot or somewhat their ability to get health information. About 18% noted “a lot” of improvement. The 43% rate of users who noted an improvement is about 7 percentage points higher than the national average (36%), and only matched by users in the South, where 43% of users said the Internet had helped them in their ability to get health-care information.

There has been growth in the online population since 2000, but little change in demographics. In 2000, about 48% of adults in the Southeast had been online. By 2001, the percentage had increased to 54%, a significant increase. Otherwise, there were no significant changes in the demographic makeup of the Southeast user population.

In terms of online activities, there was a drop across the board between 2000 and 2001, in some cases rather significantly. Southeasterners were much less likely to have sought financial information, performed online research for their job, gone online “just for fun,” or gone online to answer a question in 2001 than they were in 2000. The drop in looking for financial information mirrored a similar finding among users all over the country.

Some popular Web sites in the Southeast

The table below lists the top five Web sites in Miami and Atlanta in April 2003. Those sites are also the top five in the nation and they do not vary much region-by-region. In addition, the table highlights several regional sites that are in the top 25 most heavily used sites in the region during that month. A full listing of the top 25 sites in the region can be found in the spreadsheet that is available here: https://www.pewresearch.org/internet/releases/release.asp?id=66 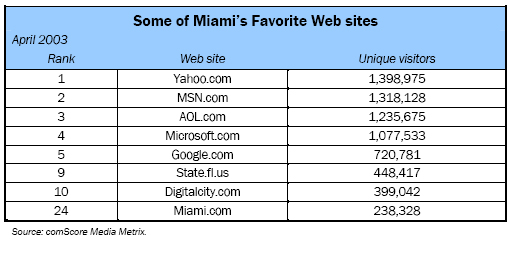 Next: Part 5. The South
← Prev Page
Page1Page2Page3Page4You are reading page5Page6Page7Page8Page9Page10Page11
Next Page →