Why some Internet users have not searched for health information

If 80% of current Internet users have looked for health information online, what does the future hold? Will the other 20% of current Internet users try a health search some day? Will the 40% of Americans who do not have Internet access some day go online and conduct health research? There is evidence that most Americans, whether they currently have Internet access or not, have a positive outlook when it comes to searching online for health information. We also notice that the more familiar someone is with the Internet, the higher his or her expectations are about online health information. However, there is a significant group of Americans who are completely cut off from online health resources. 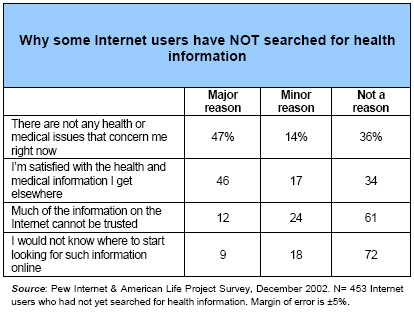 New Internet users, and even some non-users, view online health resources in a positive light.

Many respondents to our online survey reported that they are novice Internet users, often plunging in just to see what they can find. One woman wrote, “Let me start off by saying that a home computer is new for us (thanks to the generosity of family) but I now consider it INVALUABLE.” She especially likes the BrainTalk Communities,32 hosted at Massachusetts General Hospital, “I have learned more here in the last couple of months than in all the years of dealing with the medical profession (and we have had some very good doctors/nurses and I am VERY proactive).”

Another respondent happened to be answering our survey on the day of her very first health search. “I took my son to a children’s neurologist today for the first time. He says my son has short adult syndrome,” she wrote. “This is my first time using the Internet to research an illness.” Her approach was typical of a new health seeker – she just typed “child neurology” into a search engine and began reading, but unfortunately had not yet found any relevant information. 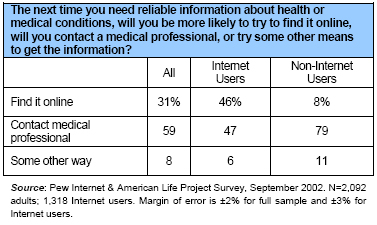 As noted above, the Internet population is holding steady at about 60% of American adults. However, of the 40% of Americans who describe themselves as non-Internet users, many in fact have some direct experience with using the Internet and have dropped off. Others live in homes that have Internet connections and are literally offline in an online home. Still other “non-users” find ways to exploit the technology by getting family and friends to send and receive emails for them and do information searches online, even though they themselves remain offline. Thus, when the number of those who live in wired homes and the number of Internet dropouts are considered, the actual size of the population of Americans who have never had any tie – formal or informal – to the Internet is about 24% of Americans. These people are generally the poorer, older segment of the not-online population, and are more likely to be white, female, retired and to live in rural areas.34 It is these Americans who are least likely to have access to any online health information.

By contrast, the 60% of Americans who do go online are gaining confidence with each passing month. As more users become “veterans,” with three or more years of experience, they are more likely to turn to the Internet if they have a health question.

Respondents to our online survey praised the special qualities of the Internet as attractions for new users – one wrote that “anonymity is helpful,” and another wrote, “I can be me without the trappings.” A particularly poignant response came from a respondent who can no longer speak, so the Internet has become a lifeline.

But when asked if there has been anything that they wanted to do using online health resources that they have not been able to do, a popular suggestion was to provide free access to medical journals, most of which are currently available only to subscribers or to those able to pay a fee. The “invisible Web”35 is truly invisible to many e-patients – search engines cannot gain access to certain pages and online databases that contain vital information.

Other popular ideas include:

Unfortunately, respondents also listed resources that do exist on the Internet, such as a glossary of medical terms or lists of clinical trials, but they just have not been able to find them. Many e-patients wished for “better search engines” or, more generally, “a better way to search for information” since they find most sites accidentally and have no clear way to “save” the searches.

Other studies have also found that health Web sites are not meeting consumers’ needs in some key areas. Dr. Christopher N. Sciamanna led a study of 300 health consumers and found that they are satisfied with what they can find online about medications and disease information, but are not satisfied with the Internet’s ability to return quality of care information, like provider ratings. These health consumers were also disappointed by the lack of access to their doctors’ calendars – they would like to make appointments online.36

However, there are at least a few Internet users who would appreciate the opportunity for online consultations. “I would very much like to communicate with a health professional who is not only familiar with my illness, but interested enough to want to assist,” wrote one respondent to our online survey. “I live in a very rural area, the closest town has a population of 1,200; I am the only person my doctor has met who has my illness. He has no time to spare to research for one patient. I am unable to travel so an on-line doctor would be wonderful.”

Next: Part 7. What We Have Learned about Internet Health
← Prev Page
Page1Page2Page3Page4Page5Page6Page7You are reading page8Page9Page10
Next Page →