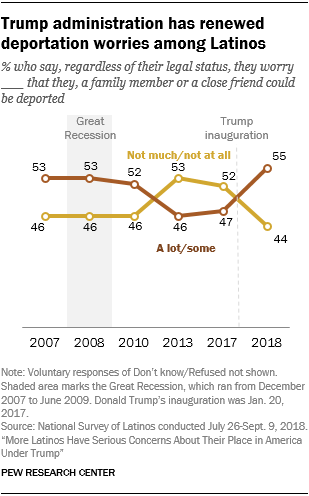 When Hispanics in the U.S. were surveyed last year, shortly before the inauguration of Donald Trump, about half said they worried that they or someone they knew could be deported. In a new survey this year, that share rose to a majority of all Hispanics – and fully two-thirds of Hispanic immigrants.

The new survey also finds that, compared with 2010, a larger share of Latinos are talking about the immigration policy debate with people they know. Latinos overall are not more likely to report participating in protests or demonstrations over immigrant rights since Donald Trump took office than in the past.

Want to know more about immigration to the U.S.?

Take your understanding to the next level with our short email mini-course.
Sign up now!

Hispanics have very close ties to immigration. In 2017, about one-in-three (35%) Hispanics living in the U.S. were immigrants, while a similar share (32%) had at least one parent who moved to the U.S. from another country.

More than half of Latinos say they worry about deportation

Hispanics who are immigrants themselves or have immigrant parents are more likely than U.S.-born Hispanics to say they worry about deportation. Fully two-thirds (66%) of immigrant Hispanics say they worry about deportation, compared with 43% of those who were born in the U.S. The share rises to 78% among those who are likely unauthorized immigrants – that is, they are not U.S. citizens and they do not have a green card.

In the first eight months of the Trump administration, immigration arrests in the interior of the U.S., particularly of immigrants without a criminal background, increased by 42% over the same period the year before. This year, the Trump administration started a zero-tolerance policy (later revised) that led to the separation of thousands of families after crossing the border illegally. However, the number of deportations under Trump are still below record levels reached during the Obama administration.

Immigration debate and participation in protests

About seven-in-ten Latinos (71%) say they have talked about the immigration policy debate with family, friends or coworkers since Trump became president, 9 percentage points higher than those who said so in 2010 (62%). The current survey was taken as the Trump administration is restricting or attempting to restrict immigration and has adopted enforcement policies at the border aimed at reducing the number of immigrants crossing illegally and those seeking asylum in the U.S. The 2010 survey was taken shortly Arizona enacted a controversial law (most of which was later blocked by the courts) to reduce the number of unauthorized immigrants.

When asked about participating in a protest or demonstration to support immigrant rights, 16% of Latinos say they have done so since Trump became president (about the same share who said that in 2010).

Some subgroups among Latinos are more likely than others to report having done this. About one-in-four Latinos ages 18 to 29 (23%) have participated in a protest, a higher share than in other age groups.

Also, a higher share of Latino Democrats than Republicans say they have participated in a protest.

Hispanics and the number of immigrants in the U.S. 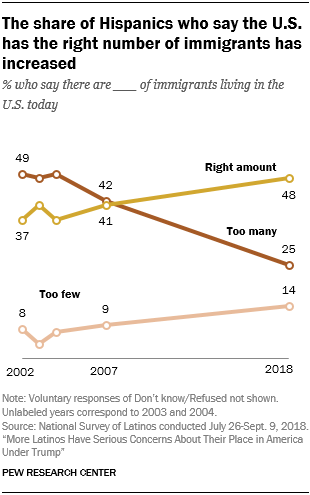 Thinking about the number of immigrants living in the U.S. today, Latinos have dramatically shifted their views from a decade ago. Today, about half of Latinos (48%) believe there is about the right amount of immigrants living in the U.S., while a quarter say there are too many immigrants and 14% say there are too few. By comparison, in 2007 (the last time this question was asked), Latinos were split between saying there were too many immigrants (42%) and the right amount (41%). Only 9% thought there were too few.

There are differences in these views among certain groups of Latinos. For example, Republican Latinos are more likely than Democrat Latinos to say there are too many immigrants.

Meanwhile, Latinos ages 65 and older are about as likely to say there are too many immigrants as that there is the right amount, while in other age groups the largest share says the amount of immigrants is right.

Another key factor linked to attitudes about the number of immigrants is education. Latinos with lower levels of education are more likely than those with at least some college education to say too many immigrants are living in the country today. 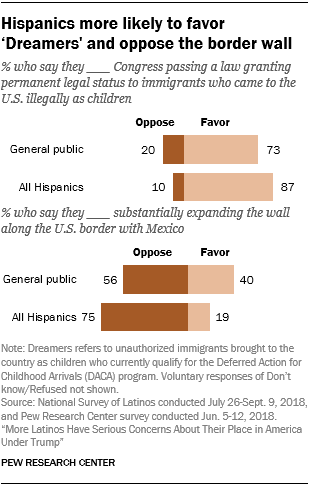 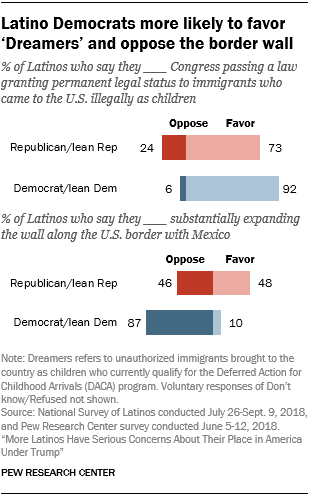 More Latinos Have Serious Concerns About Their Place in America Under Trump 1. Latinos have become more pessimistic about their place in America 2. Latinos and discrimination 3. Hispanics have become more dissatisfied with direction of U.S.
4. Views of immigration policy
More than half of Latinos say they worry about deportationImmigration debate and participation in protestsHispanics and the number of immigrants in the U.S.Views of immigration policies
5. Views of President Donald Trump 6. Hispanic voters and the 2018 midterm elections Acknowledgments Methodology Appendix A: References Appendix B: Additional table