There is a similar gap across age groups among Hispanics. Among younger Hispanics – those ages 18 to 29 – around three-quarters (72%) say they subscribe to home internet. This share is smaller for older Hispanics, and only 29% of those ages 65 and older have a home internet subscription.

Broadband use among Hispanics in 2015 varies across demographic subgroups

For example, while about two-in-ten Hispanic adults with less than a high school education (18%) report that they have broadband, 47% of high school graduates and 69% of those with at least some college experience say the same.

Little change in broadband use among Hispanics since 2010 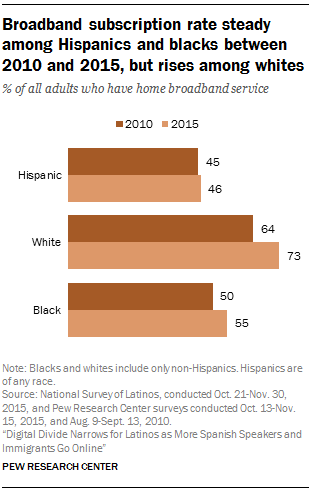 While internet use among Hispanics is on the rise, the share with a subscription to home high-speed or broadband internet is little changed since 2010 and lags behind the share of whites with home broadband service.

Next: 3. Hispanics and mobile access to the internet
← Prev Page
Page1Page2You are reading page3Page4Page5Page6Page7Page8
Next Page →