Among Latinos, who goes online?

There are other differences in internet use among Hispanic demographic subgroups. For example, those with more education and those with higher household incomes are also more likely to report using the internet. Two-thirds (67%) of Hispanics who have less than a high school education were online in 2015, compared with 95% of those with at least some college experience.

U.S.-born Latinos are somewhat more likely than foreign-born Latinos to report using the internet (91% vs. 78%), but among U.S.-born Latinos, there is no significant difference between second- or third-generation or higher Latinos when looking only at the U.S. born.

There is no significant difference between Hispanic men and Hispanic women on the share who use the internet.

Similar demographic patterns emerge when looking at all adults, though the differences are less pronounced since a larger share of older and less-educated U.S. adults use the internet.

Rise in internet use has slowed among Hispanics, stalled among blacks and whites 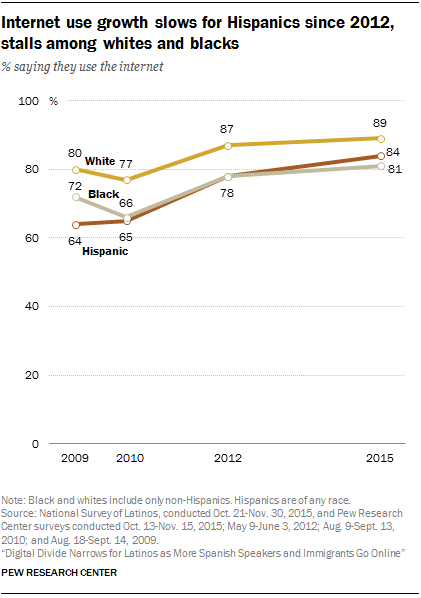 Just about all of the change in Hispanics’ internet since 2012 took place among the foreign born. While internet use among the U.S. born was steady from 2012 to 2015, the share of foreign-born Hispanics who say they use the internet increased from 69% to 78% over this period.

Similarly, those who are Spanish dominant saw the greatest increase in internet use, rising from 63% in 2012 to 74% in 2015 – an 11-percentage-point increase. By contrast, internet use rose slightly among English-dominant Hispanics and stayed about the same for bilingual Hispanics.

Next: 2. Broadband subscriptions among Latinos little changed since 2010
← Prev Page
Page1You are reading page2Page3Page4Page5Page6Page7Page8
Next Page →

Digital Divide Narrows for Latinos as More Spanish Speakers and Immigrants Go Online
1. Internet use among Hispanics
Among Latinos, who goes online?Rise in internet use has slowed among Hispanics, stalled among blacks and whites
2. Broadband subscriptions among Latinos little changed since 2010 3. Hispanics and mobile access to the internet Acknowledgments Methodology Appendix A: References Appendix B: Additional table