The median weekly wage first increased during the recession, from $673 in 2007 to $690 in 2009. That is likely due to the fact that less-skilled workers are typically let go in greater numbers during recessions. But wages have fallen during the economic recovery, a not unexpected consequence of the enormous slack that continues to exist in the labor market. The median weekly wage fell as low as $668 in the fourth quarter of 2011 and was still at the pre-recession level at the end of 2013.

This general pattern—wages increasing in the recession, falling initially in the recovery, and starting to flatten more recently—also describes the experiences of most individual groups of workers. For full-time workers, the median weekly wage rose from $777 in 2007 to $809 in 2009 and currently stands at $785. For part-time workers, the median weekly wage increased from $225 to $243 during the recession and dropped to $228 by late 2013.18 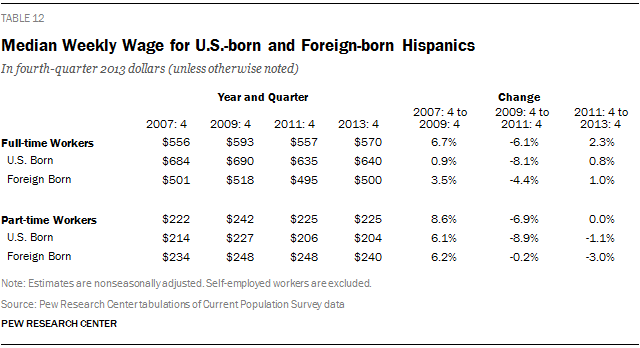 So why did wages for Latinos overall increase from 2007 to 2013? The answer, most likely, is in the changing composition of the Latino workforce. As noted earlier in this report, the immigrant share of the Hispanic workforce has fallen steeply since the start of the recession, from 55% in late 2007 to 49.7% in late 2013. Because Hispanic immigrants earn less than U.S.-born Hispanics, their retreat from the U.S. workforce raises the estimated earnings of Latinos overall.

The slowdown in immigration may have raised the floor on estimated earnings of Latinos via another channel. With replenishment from new arrivals easing up rapidly, the median age of the Hispanic immigrant workforce jumped from 37.6 in 2007 to 41.3 in 2013.19 Because earnings generally increase with age, the rise in median age may be disguising an underlying drop in the earnings of foreign-born Hispanics. 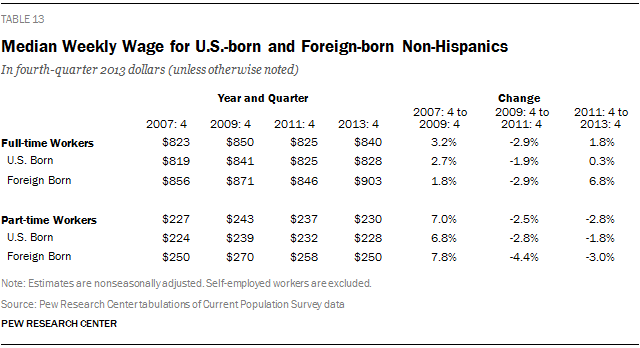 Among full-time non-Hispanic workers, earnings in the fourth quarter of 2013 were at least as high as what they were in the fourth quarter of 2007. For all full-time non-Hispanic workers, the median weekly wage increased from $823 in 2007 to $840 in 2013, or by 2%. Meanwhile, the median weekly wage for U.S.-born non-Hispanics moved from $819 to $828, and for the foreign born they increased from $856 to $903. It is possible that the stronger gain in earnings for immigrants signals a more selective inflow of immigrants.

Next: References
← Prev Page
Page1Page2Page3Page4Page5Page6You are reading page7Page8Page9Page10
Next Page →