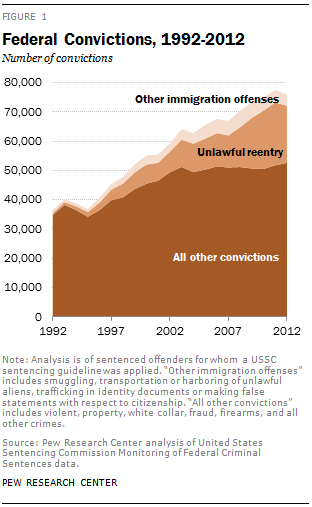 Dramatic growth over the past two decades in the number of offenders sentenced in federal courts has been driven primarily by enforcement of a particular immigration offense—unlawful reentry into the United States—according to an analysis of data from the United States Sentencing Commission (USSC) by the Pew Research Center.

Between 1992 and 2012, the number of offenders sentenced in federal courts more than doubled, rising from 36,564 cases to 75,867.1 At the same time, the number of unlawful reentry convictions increased 28-fold, from 690 cases in 1992 to 19,463 in 2012.2 The increase in unlawful reentry convictions alone accounts for nearly half (48%) of the growth in the total number of offenders sentenced in federal courts over the period. By contrast, the second fastest growing type of conviction—for drug offenses—accounted for 22% of the growth.

The United States Sentencing Commission (USSC) was established in 1984 to create sentencing guidelines for the federal courts as part of the Sentencing Reform Act. One of its missions is to collect data on all federal criminal cases sentenced under the Federal Sentencing Guidelines (USSC, 2012). The data files available from the USSC include all cases that resulted in a sentence from fiscal 1992 through fiscal 2012.

The data for this report comes from the USSC and covers all federal felony and misdemeanor cases between 1992 and 2012 for which the offense category is known and the offender is sentenced in federal courts.4 These data include all criminal immigration offenses sentenced under the U.S. Sentencing Guidelines, but do not include civil immigration charges that are heard before U.S. immigration courts.5

Unlawful reentry convictions in federal courts are part of a broader stepped up enforcement effort from the U.S. Border Patrol begun in 2005.6 Prior to this change, immigrants apprehended at the border were largely allowed to voluntarily return to Mexico—without any penalty.7

Since 2005, however, the Border Patrol has reduced voluntary returns for immigrants it apprehends, while increasing the use of other strategies. These include criminally charging immigrants apprehended at the border with unlawful reentry and increasing the use of expedited removals (which do not require a judicial review). And for those immigrants who are apprehended at the border and removed, the Border Patrol has used remote repatriation as an additional strategy, sending deported immigrants to border ports many miles away from where they were apprehended, or, in the case of Mexican nationals, repatriating immigrants into the interior of Mexico (Rosenblum, 2013). These strategies are intended to break the smuggling cycle and deter an apprehended immigrant from attempting further illegal entries into the U.S. 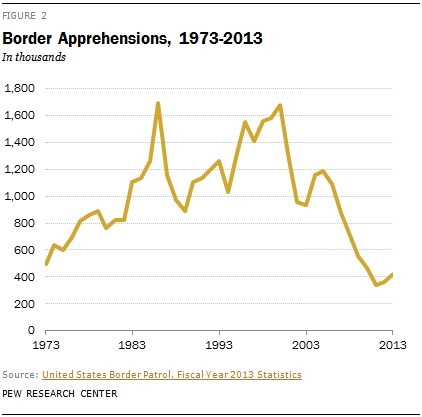 Many immigrants convicted in federal courts of unlawful reentry in recent years were processed under a Border Patrol program called “Operation Streamline.” This program, implemented in five Border Patrol Southwest sectors8 in conjunction with federal courts and attorneys, allows up to 40 unauthorized immigrants charged with unlawful reentry to be prosecuted at the same time. This program alone has accounted for nearly half (45%) of all federal immigration-related prosecutions in Southwest border districts between 2005 and 2012 (Rosenblum, 2013).

Since 2011, though, border apprehensions have begun to rise again, reaching 421,000 in 2013. Much of the recent increase is among non-Mexican immigrants (Passel, Cohn and Gonzalez-Barrera, 2013).

The federal government has deported nearly 400,000 unauthorized immigrants a year since the start of the Obama administration. A growing share of those deported were convicted of a criminal offense, including some related to immigration crimes (Gonzalez-Barrera, 2014). There were an estimated 11.7 million unauthorized immigrants living in the U.S. in 2012, according to Pew Research Center estimates (Passel, Cohn and Gonzalez-Barrera, 2013). Most, about three-quarters, are from Latin America. 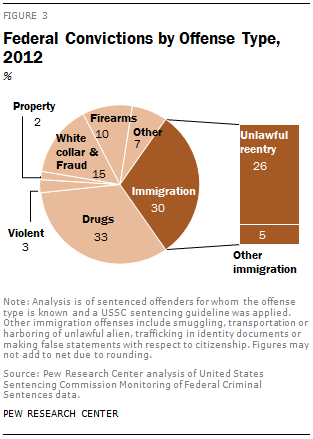 The rising number of convictions for unlawful reentry has altered the offense composition of federal offenders. In 2012, immigration offenses—of which unlawful reentry is the largest category—represented 30% of offenders, up from 5% in 1992.

This report examines the characteristics and trends of offenders sentenced in federal courts. The data for this report are from the United States Sentencing Commission’s Monitoring of Federal Criminal Sentences data files for fiscal years 1992 through 2012. These files contain information on sentencing decisions for all federal felony and Class A misdemeanor cases. Only those cases with documentation compiled by the USSC are included in the data files.

This report examines trends in convictions by offense type in U.S. federal courts. The data for this report are from the United States Sentencing Commission’s (USSC) Monitoring of Federal Criminal Sentences data for fiscal years 1992 to 2012. The findings presented are for those sentenced offenders for whom the sentencing guideline used is known. The USSC data is the main source of information about the characteristics of offenders sentenced in federal courts. The report does not provide an examination of trends in state or local courts, or in U.S. civil courts, such as immigration courts.

The terms “unauthorized immigrant” and “undocumented immigrant” are used interchangeably in this report to describe immigrants who are living in the U.S. illegally.

U.S. citizens are citizens by birth or are naturalized citizens.

Next: 2. Changing Composition of Federal Convictions
← Prev Page
You are reading page1Page2Page3Page4Page5Page6Page7Page8Page9
Next Page →