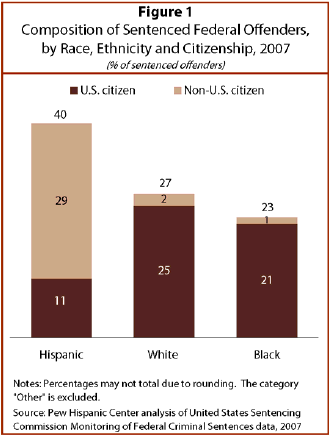 Sharp growth in illegal immigration and increased enforcement of immigration laws have dramatically altered the ethnic composition of offenders sentenced in federal courts. In 2007, Latinos accounted for 40% of all sentenced federal offenders—more than triple their share (13%) of the total U.S. adult population. The share of all sentenced offenders who were Latino in 2007 was up from 24% in 1991, according to an analysis of data from the United States Sentencing Commission (USSC) by the Pew Hispanic Center, a project of the Pew Research Center.

The United States Sentencing Commission (USSC) was established in 1984 to create sentencing guidelines for the federal courts as part of the Sentencing Reform Act. One of its missions is to collect data on all federal criminal cases sentenced under the Federal Sentencing Guidelines (USSC, 2007a). The data files available from the USSC include all cases that resulted in a sentence from fiscal 1991 through fiscal 2007.

The total number of offenders sentenced in federal courts more than doubled from 1991 to 2007. During this period, the number of sentenced offenders who were Hispanic nearly quadrupled and accounted for more than half (54%) of the growth in the total number of sentenced offenders. One reason all of these figures have risen so sharply is that immigration offenses, unlike most other criminal offenses, are exclusively under the jurisdiction of federal rather than state or local courts.

Hispanics who were convicted of any federal offense were more likely than non-Hispanics to be sentenced to prison. But among all federal offenders sentenced to prison, Hispanics were also more likely than blacks or whites to receive a shorter prison term. These racial and ethnic disparities in sentencing appear to be linked to USSC guidelines that attach clear boundaries for the types of sentences that can be meted out for different types of crimes.

Hispanics represented nearly one-in-three (31%) inmates incarcerated in federal prisons in 2007, a greater share than whites (28%) but a smaller share than blacks (37%) (Bureau of Justice Statistics Program). This stands in sharp contrast to the ethnic and racial makeup of state prisons and local jails, where more than nine-in-ten (91%) of the 2.3 million inmates in this country are held. Among inmates held in state prisons, 19% were Hispanic, 36% were white and 39% were black in 2005 (West and Sabol, 2008). Among inmates held in local jails, 16% were Hispanic, 43% were white and 39% were black in 2007 (Pastore and Maguire, 2009).

According to the Pew Center on the States (2008), incarceration rates vary greatly across racial and ethnic groups. In 2006, 1.5% of Hispanic adults were incarcerated, while 3.4% of blacks and less than 1% of whites were behind bars.

The data for this report are from the United States Sentencing Commission’s Monitoring of Federal Criminal Sentences data files for fiscal years 1991 through 2007. These files contain information on all federal court cases in which an offender was sentenced. Only those cases with documentation compiled by the USSC are included in the data files. Prior to fiscal 1991, the commission utilized an alternative data collection method (Reedt and Widico-Stroop, 2008); data from those years are not included in the analysis presented in this paper.

Key findings of this report include:

The terms “Hispanic” and “Latino” are used interchangeably in this report. The terms “whites” and “blacks” are used to refer to the non-Hispanic components of their population.

The terms “undocumented” and “illegal” are used interchangeably in this report.

U.S. citizens are citizens by birth or naturalized citizens.

Next: II. Changing Demographics of Sentenced Federal Offenders
← Prev Page
You are reading page1Page2Page3Page4Page5Page6Page7
Next Page →