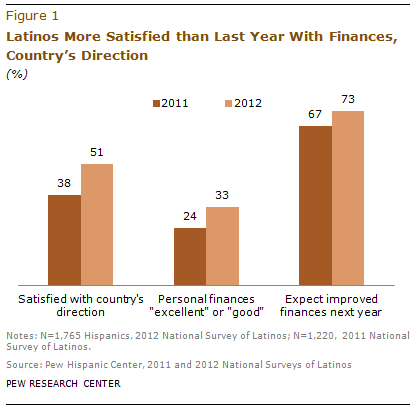 Hispanics have grown more satisfied with the nation’s direction and more confident in their finances since 2011, according to a new survey from the Pew Hispanic Center, a project of the Pew Research Center.

Today, half of Latinos (51%) express satisfaction with the direction of the country, a 13 percentage point increase over 2011, when 38% said the same. One-third (33%) now report that their finances are in “excellent” or “good” shape, up from one-quarter (24%) who said the same in 2011. And looking forward, Latinos have grown more optimistic about their family’s finances in the next 12 months, with three-in-four (73%) expecting improvement, up from 67% who said the same in 2011.

However, other economic indicators illustrate the difficult times that Latinos have faced since the onset of the Great Recession. Driven mainly by the collapse in the housing market, median household wealth among Latinos declined by 58% between 2005 and 2010 (the latest year for which such figures are available), more than that of either whites (18%) or blacks (54%).2 In 2007, for the first time, the number of Latino children in poverty surpassed the number of white children or black children living in poverty (Lopez and Velasco, 2011). And by their own assessment, Latinos say they were hit harder by the recession than any other group (Taylor, Lopez, Velasco and Motel, 2012).

During this year’s presidential campaign, the issue of jobs and the economy has been a top concern for Hispanics, just as it is for the general public. According to the Pew Hispanic survey, 47% of all Hispanics rate the issue as “extremely important” to them personally (Lopez and Gonzalez-Barrera, 2012). Among Hispanic registered voters, 54% rate jobs and the economy as extremely important.

This report is based on a nationally representative bilingual telephone survey of 1,765 Latino adults with a margin of error of 3.2 percentage points at the 95% confidence level. The survey was fielded from September 7 to October 4, 2012, largely before the first presidential debate, which occurred on October 3, 2012. For a full description of the survey methodology, see Appendix B. The report is also based on a Pew Hispanic Center analysis of the U.S. Census Bureau’s Current Population Survey data. In addition, the report uses poverty and household income data published by the federal government.

This report explores the economic attitudes and experiences of Hispanics. It is based on an analysis of several data sources. Hispanic attitudes and financial self-assessments are based on the 2012 National Survey of Latinos (NSL). The survey was conducted from September 7 through October 4, 2012, in all 50 states and the District of Columbia among a randomly selected, nationally representative sample of 1,765 Latino adults. The survey was conducted in both English and Spanish on cellular as well as landline telephones. The margin of error for the full sample is plus or minus 3.2 percentage points. Interviews were conducted for the Pew Hispanic Center by Social Science Research Solutions (SSRS).

The report also contains an analysis of unemployment rate trends among Hispanics and other groups based on Pew Hispanic Center tabulations of the U.S. Census Bureau’s Current Population Survey (CPS). In addition, statistics on poverty rates and median household income published by the federal government are used.

Next: II. Hispanics and Personal Finances
← Prev Page
You are reading page1Page2Page3Page4Page5Page6Page7
Next Page →