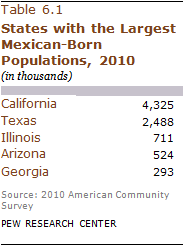 There is great variation in the patterns of immigration among the nation’s 12 million Mexican-born immigrants. Many immigrants settle permanently and have children born in the United States. But a substantial number also travel back and forth across the border through the year, a pattern known as circular migration. There has long been a seasonal pattern to Mexican-U.S. migration, with larger numbers of people heading north in the spring and summer and larger numbers of people headed south in the fall and winter. This has abated somewhat, according to data from Mexico that indicate movement spread more evenly through the year (Pew Hispanic Center, 2011).

Compared with other foreign-born residents of the U.S., Mexican-born immigrants are younger, less educated and less likely to speak English very well, according to tabulations from the 2010 American Community Survey. Only about a quarter (23%) are U.S. citizens, in large part because most Mexican immigrants are unauthorized and not eligible for citizenship; by comparison, a slight majority of immigrants from all other countries (52%) are citizens. Not withstanding the presence of unauthorized immigrants, legal Mexican immigrants have lower rates of naturalization than other immigrants (Passel 2007).

Most Mexican immigrants ages 15 and older (58%) are married, a share similar to that of other immigrants (59%).

By state, well over half (58%) live in California (4.3 million) and Texas (2.5 million). That share has declined since 2000, when it was 63%, an indication of how Mexican-born immigrants have dispersed to other states. No other state has more than a million Mexican-born residents, however.

Next: Appendix A. Additional Tables and Chart
← Prev Page
Page1Page2Page3Page4Page5You are reading page6Page7Page8Page9
Next Page →

Net Migration from Mexico Falls to Zero—and Perhaps Less II. Migration Between the U.S. and Mexico III. Mexicans Sent Back to Mexico by U.S. Authorities IV. U.S. Immigration Enforcement V. Mexico, by the Numbers
VI. Characteristics of Mexican-Born Immigrants Living in the U.S.
Demographic DifferencesMexican Populations by Geography
Appendix A. Additional Tables and Chart Appendix B: A Statistical Profile of Mexican Immigrants in the U.S. Appendix C. Methodology