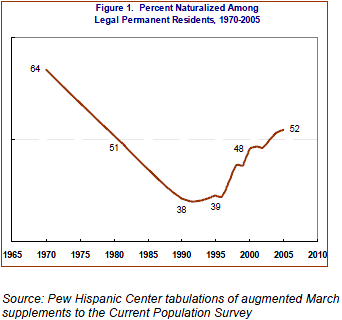 The proportion of all legal foreign-born residents who have become naturalized U.S. citizens rose to 52% in 2005, the highest level in a quarter of a century and a 15 percentage point increase since 1990, according to an analysis by the Pew Hispanic Center.

The population of naturalized citizens reached 12.8 million in 2005, a historic high that reflects both a rise in the number of legal migrants and an increased likelihood that those who are eligible apply for citizenship. As a result of these combined trends, the average number of naturalizations annually has increased from fewer than 150,000 in the 1970s to more than 650,000 since the mid-1990s. 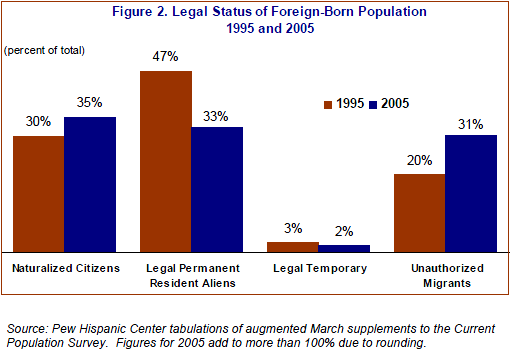 The population of immigrants who are eligible for naturalization was 8.5 million in 2005; of these more than a third, or nearly 3 million, were Mexican. Mexicans still have a comparatively lower tendency to become U.S. citizens, but the number of naturalized citizens from Mexico rose by 144% from 1995 to 2005—the sharpest increase among immigrants from any major sending country.

While the number of legal permanent residents admitted to the U.S. has risen in recent years, the number of naturalized citizens has grown even more rapidly (Appendix Table 2). In fact, because so many new immigrants have become citizens, the size of the legal non-citizen population has barely grown since the mid-1990s.

These trends point to a sharp rise since the mid-1990s—following nearly half a century of decline—in the tendency of legal permanent residents to naturalize. Legal immigrants are not only becoming citizens at a higher rate than in the recent past, but they are also naturalizing more quickly. Whatever the reasons for this, it is clear that today’s legal immigrants are signing on to a closer relationship with the U.S. than was the case a decade or two ago.

The number of unauthorized migrants also rose sharply between 1995 and 2005, the main period covered by this analysis—so this 10-year stretch has seen a growth among both the most and the least rooted of immigrants.

The makeup of the naturalized population has also changed. Immigrants from Europe and Canada no longer are the largest group. Over the past decade, they have become outnumbered by naturalized U.S. citizens from both Latin America and Asia.1 The number of new citizens from Latin America grew by nearly 2.4 million—more than that from any other region—between 1995 and 2005.

Although immigrants from Europe are among the most likely to become citizens, naturalization rates are rising more rapidly among immigrants from other parts of the world.

This analysis also finds, as previous studies have shown, that the longer immigrants have been in the U.S., the more likely it is that they will become citizens. Men and women are about equally likely to naturalize. Immigrants are most likely to naturalize if they speak English well, are highly educated or have high incomes. Also, people who are homeowners or are married to U.S. citizens are far more likely to be naturalized than those who rent or are married to noncitizens. 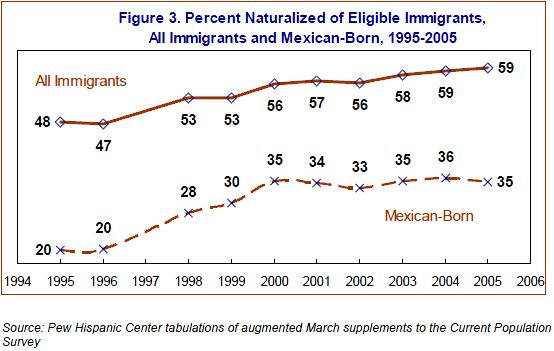 This report is based largely on data from the U.S. Census Bureau’s Current Population Survey, with some adjustments (see Methodology section). It also draws on data from the federal Office of Immigration Statistics, now part of the Department of Homeland Security.

To become a citizen, a legal permanent resident in most cases must:

The federal agency that processes citizenship applications, the U.S. Citizenship and Immigration Services, recently proposed an increase in naturalization fees, citing rising costs. The cost of processing a citizenship request for adult applicants would rise from $330 to $595 and for children from $225 to $460.

The following terms are used describe immigrants and their status in the U.S. In some cases, they differ from official government definitions because of limitations in the available survey data.

Naturalized citizen: Legal permanent resident who has fulfilled the length of stay and other requirements to become a U.S. citizen, and taken the oath of citizenship.

Eligible immigrant: In this report, a legal permanent resident aged 18 or older who meets the length of stay qualifications to file a petition to become a citizen but has not naturalized.

Next: II. Introduction
← Prev Page
You are reading page1Page2Page3Page4Page5Page6Page7Page8Page9
Next Page →