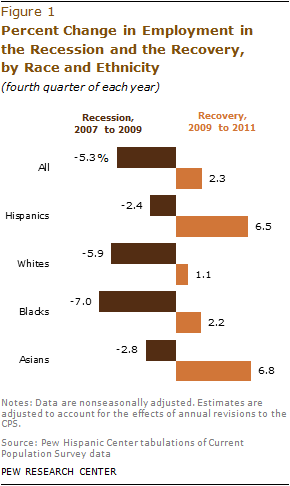 Two years after the U.S. labor market hit bottom, the economic recovery has yielded slow but steady gains in employment for all groups of workers. The gains, however, have varied across demographic groups, with Hispanics and Asians, in particular, experiencing a faster rate of growth in jobs than other groups. Their employment levels are higher now than just before the start of the Great Recession in December 2007, a milestone not yet reached by white and black workers.

The disparate trends in the jobs recovery from 2009 to 2011 reflect the rapidly changing demographics of the American workforce. Although jobs growth for Hispanics and Asians was more rapid than for other groups, it merely kept pace with the growth in their working-age (ages 16 and older) populations. The slower rate of jobs growth for whites and blacks reflects the relatively slow growth in their populations. Thus, the share of each group’s population that is employed, the employment rate, has barely risen since the end of the recession, according to new Pew Research Center analysis of government data.

The story is the same when one looks at the jobs recovery for immigrants and native-born workers. Immigrants, the vast majority of whom are Hispanic or Asian, are experiencing a faster rate of growth in employment than are native-born workers. This difference is also roughly in line with the difference in the growth in their working-age populations during the recovery.

Demographic change, however, does not explain why men have gained more jobs than women since 2009. Among the groups examined in this report, women represent the only group for whom employment growth has lagged behind population growth in the recovery. Job cutbacks by federal, state and local governments is one reason women have lagged behind men in recent years, but a previous analysis by the Center found that much about this phenomenon remains unclear.1 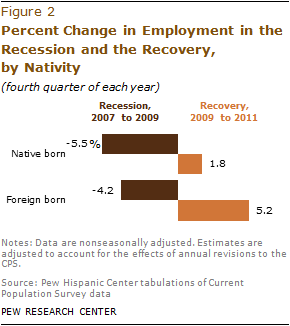 Over the full cycle of the recession and the recovery, that is, from 2007 to 2011, employment increased from 19.9 million to 20.7 million for Hispanics and from 6.9 million to 7.2 million for Asians, an increase of about 4% for each group. For blacks and whites, employment levels remain about 5% below the levels at the start of the recession, with lingering losses of 4.9 million jobs for white workers and 0.8 million jobs for black workers.

Foreign-born workers are also experiencing a faster rate of growth in employment than native-born workers. In the recovery, from the fourth quarter of 2009 to the fourth quarter of 2011, employment among the native born increased 1.8% (2 million) and employment among the foreign born increased 5.2% (1.1 million). This difference also reflects the difference in the growth in their working-age populations from 2009 to 2011. 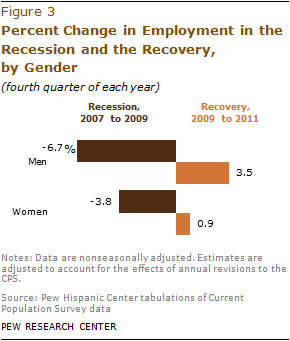 Women, who fared better than men in the recession, have not done as well in the recovery. Men realized a gain of 2.6 million jobs from the fourth quarter of 2009 to the fourth quarter of 2011, compared with only 0.6 million for women. Nonetheless, compared with before the start of the recession in 2007, employment levels for men are down by more, a loss of 3.4% for men versus 2.9% for women. Thus, men still face a steeper climb back.

Although employment is on the rise in the economic recovery, it is growing at a rate that just keeps up with ongoing additions to the stock of workers. The Great Recession put about 8 million people out of work, and the employment rate fell from 63.0% in the fourth quarter of 2007 to 58.5% in the fourth quarter of 2009. By the end of 2011, the employment rate had risen only slightly, to 58.7%. This suggests that the slack created by the recession is still largely present in the labor market and that the share of people with jobs is much less than it could be, based on pre-recession outcomes.

The shortfall in employment relative to its potential is greatest for black workers. Their employment in the fourth quarter of 2011 is estimated to be 12% (about 2 million) below its potential. The current employment gap is estimated to be more than 7% (7 million) for whites, nearly 6% for Hispanics (upwards of 1 million) and 5% for Asians (less than 0.5 million). The percentage gaps for all racial and ethnic groups are only slightly smaller than they were two years ago.5

The unemployment rate, another key labor market indicator analyzed in the report, decreased from 2009 to 2011 for all groups examined in this report. But at least part of the drop in unemployment rates during the recovery is due to a smaller share of people actively seeking work. That is because people who do not actively seek work are not counted among the unemployed. Among racial and ethnic groups, this phenomenon was most notable for Hispanics and whites. Not coincidentally, the unemployment rate for Hispanics and whites decreased more during the recovery than it did for blacks and Asians.

A handful of industries were responsible for most of the job gains in the economic recovery. Both Hispanics and non-Hispanics gained significant numbers of jobs in professional business services, wholesale and retail trade, and manufacturing. The leading source of jobs growth for Hispanics was the hospitality sector—eating, drinking and lodging services—where they gained 326,000 jobs from 2009 to 2011. They also gained 101,000 jobs in construction.

The data for this report are derived from the Current Population Survey (CPS), a monthly survey of about 55,000 households conducted jointly by the Bureau of Labor Statistics (BLS) and the Census Bureau. Data from three monthly surveys were combined to create larger sample sizes for individual groups of workers. Thus, most of the analysis is conducted on a quarterly basis. Unless otherwise noted, estimates in this report are not seasonally adjusted.7

This report analyzes labor market trends in the economic recovery from 2009 to 2011. The focus is on the change in employment by race, ethnicity, gender and nativity. The data for this report are derived from the Current Population Survey, a monthly survey of about 55,000 households conducted jointly by the Bureau of Labor Statistics and the Census Bureau. Data from three monthly surveys were combined to create larger sample sizes for individual groups of workers. Thus, most of the analysis is conducted on a quarterly basis.

Next: II. The Economic Recovery for Hispanics and Non-Hispanics
← Prev Page
You are reading page1Page2Page3Page4Page5Page6Page7
Next Page →