Hispanics in the United States have several options when it comes to describing their identity. They can use an ethnic label such as “Hispanic” or “Latino”; they can use their family’s country of origin; or they can call themselves “American.” The National Survey of Latinos finds that most have used all of these descriptors at one time or another. But it also finds that their first choice by far is their family’s country of origin.

This chapter explores the many ways Latino youths identify themselves, including by race, ethnicity, and nationality. It also examines how they have been socialized by their parents in ways that relate to their sense of identity. And it reports their views about whether or not there is a common culture among Hispanics in the U.S. 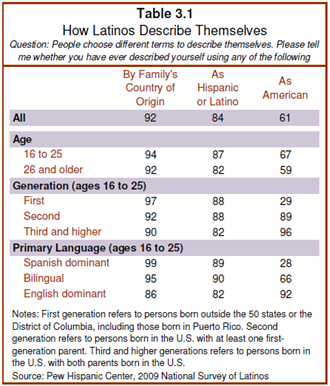 When asked about the terms they ever use to describe themselves, 94% of Latinos ages 16 to 25 say they have used their family’s country of origin, 87% say the terms “Hispanic” or “Latino,” and 67% say “American.” There are small differences in these shares between younger respondents and those who are ages 26 and older, but the basic pattern is the same.

To foreign born Latinos ages 16 to 25, citizenship is correlated with a stronger U.S. identity; those who are U.S. citizens are more than twice as likely as those who aren’t to describe themselves as American: 53% versus 19%. This pattern holds even once the number of years an immigrant has been in the United States is taken into account. 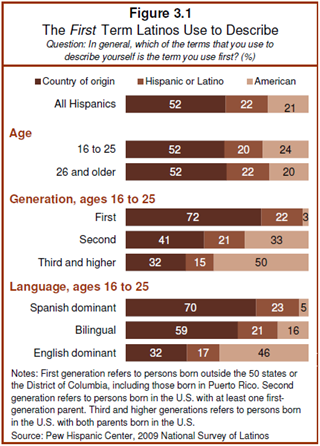 Asked which term they generally use first to describe themselves, young Hispanics show a strong preference for their family’s country of origin (52%) over American (24%) or Hispanic or Latino (20%). There is virtually no difference on this question between Hispanic youths and Latinos ages 26 and older.

It is only among third-generation young Hispanics that the term “American” becomes the first option. Within this group, half (50%) say they use American first, while one-third (33%) of the second generation and virtually no (3%) foreign-born young Hispanics say the same.

Hispanic or Latino? Many Don’t Care 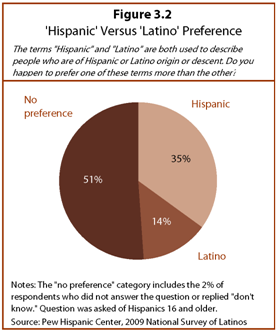 “Hispanic” and “Latino” are terms used by the U.S. Census Bureau and other government agencies as well as by the media, civic groups, political leaders, and scholars in this country. These terms are not as widely used in any of the world’s Spanish-speaking countries.

“My dad and his whole side of the family…[are] diehard Cubans. My mom’s family is pretty much…white Anglo Saxon…and my dad never taught me or my sister Spanish. So….we go to family dinners…and it’s like you can’t even communicate with your family.”
—19-year-old Hispanic male

“America, like the culture, it’s so varied. So many different people from so many different countries. But if you say you’re Dominican, then you get into more like who we are…the food, the music…”
—25-year-old Hispanic female

“I’m Mexican…that’s what I call myself all the time. Always has been and always will be.”
—18-year-old Hispanic male 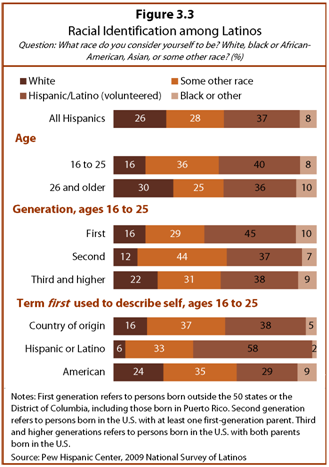 A large majority of young Latinos do not see themselves fitting into the categories of race used by the U.S. Census Bureau. When asked “What race do you consider yourself to be: white, black or African-American, Asian, or some other race?” more than three-in-four (76%) young Latinos say they are some other race (36%) or volunteer that their race is Hispanic or Latino (40%).8 Fewer than one-in-five (19%) say their race is either white (16%) or black (3%).9

The Parental Socialization of Young Latinos 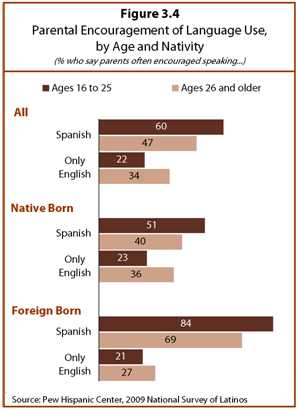 The way today’s young Latinos choose to describe themselves is linked to a series of identity and cultural signals they received from their parents.

These differences in parental encouragement of language use persist even when controlling for immigrant status. Young native-born Latinos are more likely than older native-born Latinos to have been encouraged often by their parents to speak Spanish—51% versus 40%. Among the foreign born, more than eight-in-ten (84%) young immigrant Latinos say their parents often encouraged them to speak Spanish, while only about seven-in-ten (69%) older immigrant Latinos say the same.

“Growing up…I didn’t speak a lot of Spanish because my dad had…always told me… ‘Speak English because I want you to do well in school,’ and … ‘I don’t want you to have an accent or people judge you.’”
—20-year-old Hispanic female 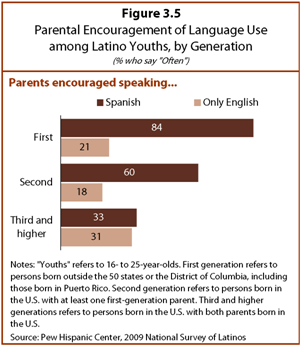 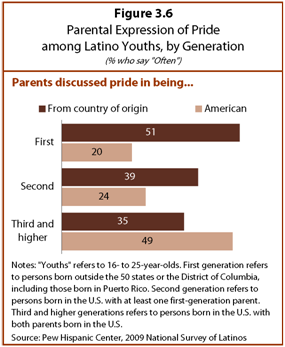 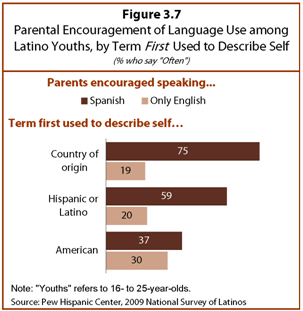 Reasons for Coming to the United States 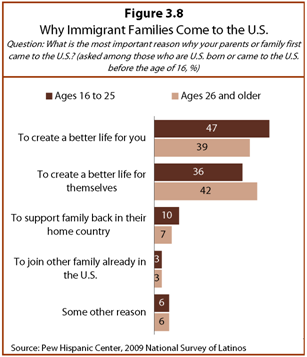 Asked why they and/or their families immigrated to the United States, survey respondents most often cited a desire to create a better life for themselves or their children. Among young immigrant Hispanics, a significant share also say they came here to help support family in their home country. 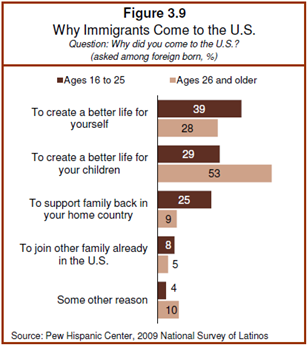 “My mom didn’t get into details [of why they came to the U.S.], but we know why they did it.”
—21-year-old Hispanic male

Skepticism about a Shared Culture 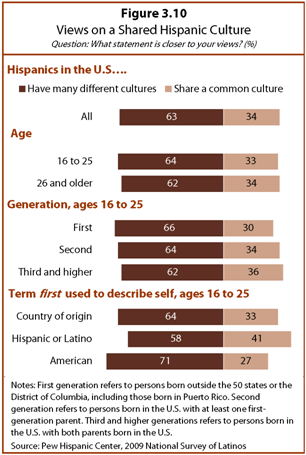 For Latinos, the question of ethnic and racial identity is complicated by the fact that a large majority see more cultural differences than commonalities among Latinos who live in the Unites States.

Asked to choose between two statements about Latinos—one asserting their shared culture and the other asserting their different cultures—young Latinos picked the second statement by a ratio of nearly two-to-one (64% versus 33%). There are virtually no differences on this question by age group or by immigrant generation among young Latinos. Not surprisingly, young Latinos most inclined to see a shared culture among Latinos are those who use the terms “Hispanic” or “Latino” first when describing themselves. However, even among this group, nearly six-in-ten (58%) say they see more internal differences than commonalities among Hispanics in the U.S.

How Well Latinos Get Along

“For me…the whole race dynamic is interesting…I look at my grandpa…[he] is black. I look at my other grandpa, he’s really indigenous…hair, features…very very indigenous. Its this hybrid blood.”
—19-year-old Hispanic female

Nearly two-thirds of Hispanics in the U.S. are from the same country of origin—Mexico—while the remaining third trace their roots to any of about two dozen Spanish-speaking countries (Pew Hispanic Center, 2009). Given this diversity, how well do Hispanics from different backgrounds get along with one another?

Overall, young Hispanics see more harmony than conflict; nearly two-thirds of Hispanic youths (64%) say Latinos from different countries of origin get along well, while more than a third (35%) say they do not. Similar shares of adult Hispanics say the same. 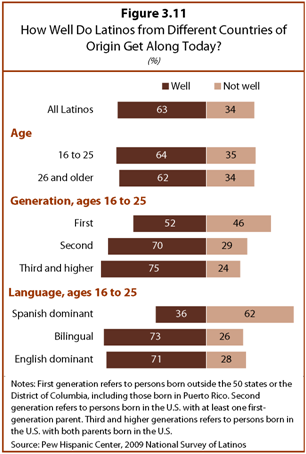 However, there are some sharp variances on this question—especially by language usage. Among young Latinos who predominantly speak Spanish, just 36% say that Hispanics from different countries of origin get along well. In contrast, more than seven-in-ten of those who are bilingual (73%) or predominantly speak English (71%) see harmony among Hispanic communities from different countries of origin.

Next: IV. Language Use
← Prev Page
Page2You are reading page3Page4Page5Page6Page7Page8Page9Page10Page11Page12
Next Page →

Between Two Worlds: How Young Latinos Come of Age in America II. Demography
III. Identity
The Terms Hispanics Use to Describe ThemselvesTerms Latinos Use to Describe ThemselvesHispanic or Latino? Many Don’t CareRacial IdentificationThe Parental Socialization of Young LatinosReasons for Coming to the United StatesSkepticism about a Shared CultureHow Well Latinos Get Along
IV. Language Use V. Economic Well-Being VI. Education: The Gap Between Expectations and Achievement VII. Life Satisfaction, Priorities and Values VIII. Family, Fertility, Sexual Behaviors and Attitudes IX. Gangs, Fights and Prison References Appendix A: Hispanic Population by State Appendix B: 2009 National Survey of Latinos, Survey Methodology and Topline