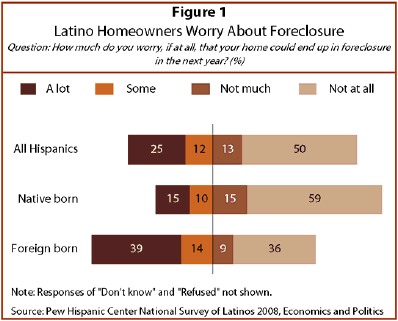 Like the U.S. population as a whole, Latinos are feeling the sting of the economic downturn. Almost one-in-ten (9%) Latino homeowners say they missed a mortgage payment or were unable to make a full payment and 3% say they received a foreclosure notice in the past year, according to a new national survey of 1,540 Latino adults conducted by the Pew Hispanic Center. Moreover, more than six-in-ten (62%) Latino homeowners say there have been foreclosures in their neighborhood over the past year, and 36% say they are worried that their own home may go into foreclosure. This figure rises to 53% among foreign-born Latino homeowners. 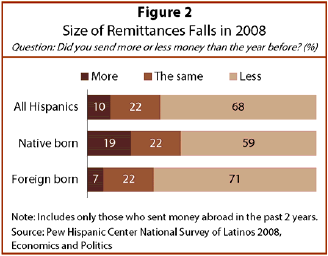 Latinos make up 15 percent of the total U.S. population, and in many respects their downbeat assessment of the nation’s economy is similar to that of the general population. According to a recent survey from the Pew Research Center for the People & the Press (December 2008), almost six-in-ten (59%) say the U.S. economy is in poor condition, a belief held by 63% of Latinos. And similar shares of the general U.S. population and Latinos say that jobs are difficult to find where they live—73% versus 78%. 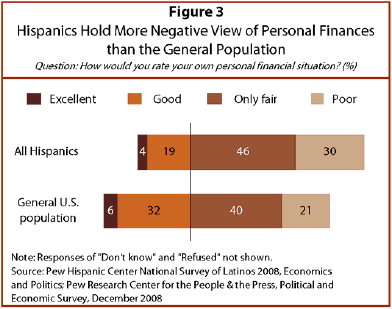 However, Latinos hold a more negative view of their own current personal financial situation than does the population as a whole. More than three-in-four (75%) Latinos, and 84% of foreign-born Latinos, say their current personal finances are in either fair or poor shape, while 61% of the general U.S. population says that. But Latinos are more optimistic than others about the future: 67% expect that their financial circumstances will improve over the next year; just 56% of the general population feels the same way.

As the economy has soured, many Latinos are adjusting their economic behaviors. More than seven-in-ten (71%) report that they have cut back spending on eating out. Two-thirds (67%) say they planned to curtail holiday spending. More than one-fourth (28%) report that they helped a family member or friend with a loan. 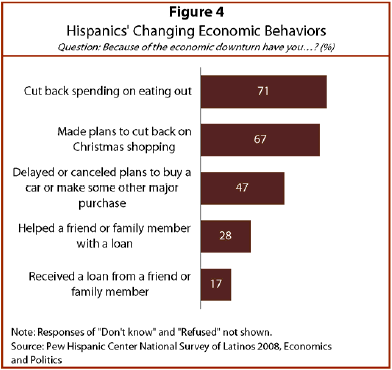 This report is based on a bilingual telephone survey of a nationally representative sample of 1,540 Hispanics ages 18 and older. Interviews were conducted from November 11 through November 30, 2008. The margin of error for the full sample is plus or minus 3.0 percentage points at the 95% confidence level. For a full description of the survey methodology, see Appendix A. Key findings of this study include the following:

The National Survey of Latinos 2008, Economics and Politics, focuses on Hispanic adults’ views of the state of the economy, their own personal finances and housing market conditions. It also asks about the sending of remittances in the past year and how Latinos have changed their economic behaviors in the economic downturn. The survey was conducted from November 11 through November 30, 2008, among a randomly selected, nationally representative sample of 1,540 Hispanic adults. The survey was conducted in both English and Spanish. The margin of error for the full sample is plus or minus 3.0 percentage points.

The terms “general population” and “general public” are used interchangeably in this report to refer to the entire U.S. adult population, including Hispanics.

Next: II. Latinos and Economic Conditions
← Prev Page
You are reading page1Page2Page3Page4Page5Page6Page7Page8Page9Page10
Next Page →

Hispanics Say They Have the Worst of a Bad Economy
Minorities, Immigrants and Homeownership
Between Here and There: How Attached Are Latino Immigrants to Their Native Country?
Coronavirus Economic Downturn Has Hit Latinos Especially Hard