According to the survey results, more than one in four Latinos (27 percent) lack a regular health care provider.* Latinos are a diverse population, and a variety of factors need to be considered to understand why some have regular providers and some don’t. Immigration and assimilation are factors, as large shares of Latinos born outside of the United States and those who speak little English lack regular health care. Socioeconomic factors, such as education, immigration and language, weigh heavily in creating these disparities. However, there is also a substantial share of U.S.-born, fully assimilated Latinos in the ranks of those with no usual health care provider.

Finally, even though the poorly educated and less assimilated are less likely to have a regular health care provider, they comprise only a portion of the population that falls into this category. A sizeable proportion of those with no usual place for health care have at least a high school diploma (50 percent), are native born (30 percent), are proficient in English (52 percent) or are U.S. citizens (50 percent).

Importance of Having a Usual Health Care Provider

Respondents are considered to have a “usual” or “regular” health care provider or place to receive health care if they:

1. Report that they have a place where they usually go to when they are sick or need advice about their health, and

2. This usual place is not a hospital emergency room 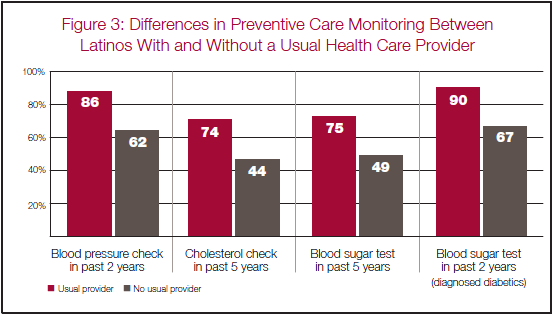 The Likelihood of Having a Usual Health Care Provider

Nativity and assimilation are both linked to the likelihood of having a regular health care provider.

Place of birth and assimilation also play a role in the likelihood of having a regular health care provider. While 22 percent of U.S.-born Latinos do not have a place where they usually go for medical care, this share increases to 30 percent among those born outside the 50 states. In general, less assimilated Hispanics are those most at risk of lacking a usual place for health care. Among naturalized and native-born Hispanic citizens, 21 to 22 percent lack a usual health care provider. That compares with 31 percent of legal permanent residents and 43 percent of immigrants who are neither citizens nor legal permanent residents. Among all Latino immigrants, about half of recent arrivals—those in the country for less than five years—lack a usual place for health care, compared with 21 percent of those who have lived in the United States for at least 15 years. Hispanics who are predominantly Spanish speakers are much more likely to lack regular health care than their predominantly English-speaking counterparts (32 percent versus 22 percent).

Having health insurance is an important factor associated with having a usual place to obtain health care. While 42 percent of the uninsured lack a health care provider, only 19 percent of the insured do not have one. 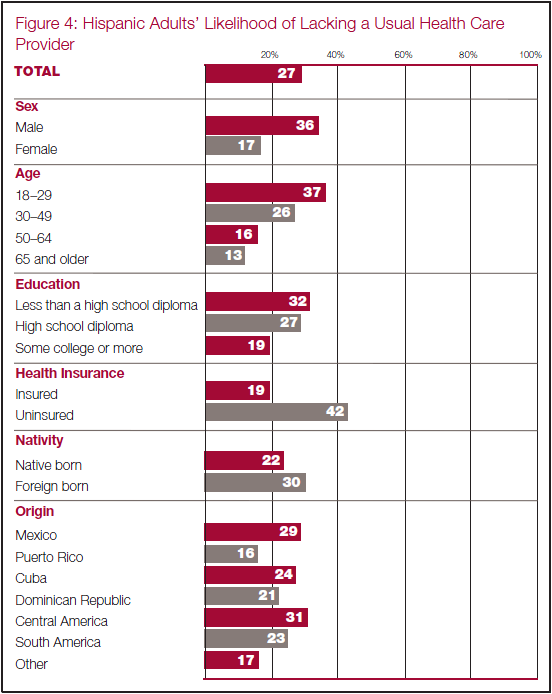 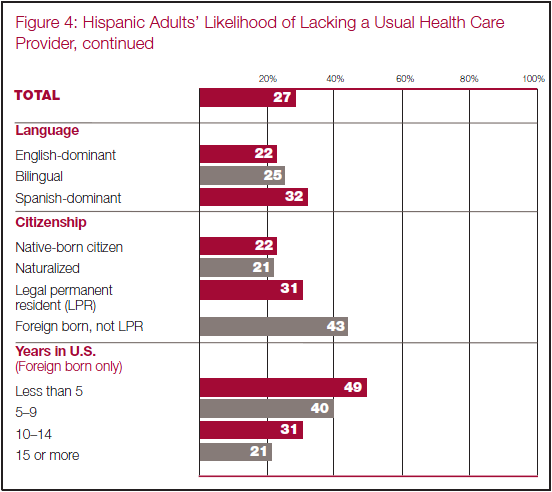 Getting Care Outside of the U.S.

About one in 12 Hispanics (8 percent) in the U.S. have obtained medical care, treatment or drugs in Latin America during the previous year, and one in six (17 percent) knows a family member or friend who has done so.

Latinos who describe their recent medical care in the United States as only fair to poor are somewhat more likely to get medical services outside the country—11 percent have, compared with 6 percent of those who describe their care in this country as excellent. Hispanics without health insurance also are more likely to have received care in another country. Of those without insurance, 11 percent did; of those with insurance, 7 percent did. Of Latinos with a regular provider in the U.S. medical system, 8 percent say they have gotten care abroad, compared with 10 percent of those with no regular provider.

Hispanics ages 65 and older are the least likely to seek care outside the United States (4 percent) and those ages 50–64 are the most likely (9 percent). Foreign-born Latinos are somewhat more likely (9 percent) than the native born (6 percent) to get medical care in Latin America, and those from Mexico (10 percent) are more likely than non-Mexicans overall. A higher share of bilingual (10 percent) and Spanish-dominant (9 percent) Hispanics seek medical care in Latin America than do English speakers (4 percent).

One in 10 people with at least some college education report getting recent treatment or drugs in Latin America, compared with single-digit percentages for those with less education.

Who are the Hispanics who are not being reached by the health care system? This section looks at the characteristics of people who lack a usual health care provider.

Most Hispanics who lack a provider are male (69 percent). The population also tends to be young: 41 percent are 18–29 years of age, and 43 percent are 30–49. As is expected, Hispanics with low educational attainment comprise a large proportion of those lacking a provider; 47 percent report having less than a high school diploma. The vast majority of those with no usual place for health care are of Mexican origin (69 percent), and an additional 11 percent are of Central American origin.

Of those Hispanics who have no usual place for health care, 45 percent have health insurance.

Yet, what is also notable about those lacking a usual health care provider is the prevalence of Latinos whose characteristics suggest assimilation. While most Latinos who lack a provider are foreign born (70 percent), a full 30 percent were born in the 50 states. Half of those lacking a usual place for health care are citizens. A sizeable minority of immigrants who lack regular health care (45 percent) have lived in the United States for fewer than 10 years, but the majority (52 percent) have lived in the United States for 10 years or more. On a similar note, a slight majority of those with no usual health care provider is English-dominant or bilingual (52 percent).

Finally, 45 percent of Hispanics who have no usual place for health care say they have health insurance. So though health insurance is correlated with usual care, it does not guarantee it. 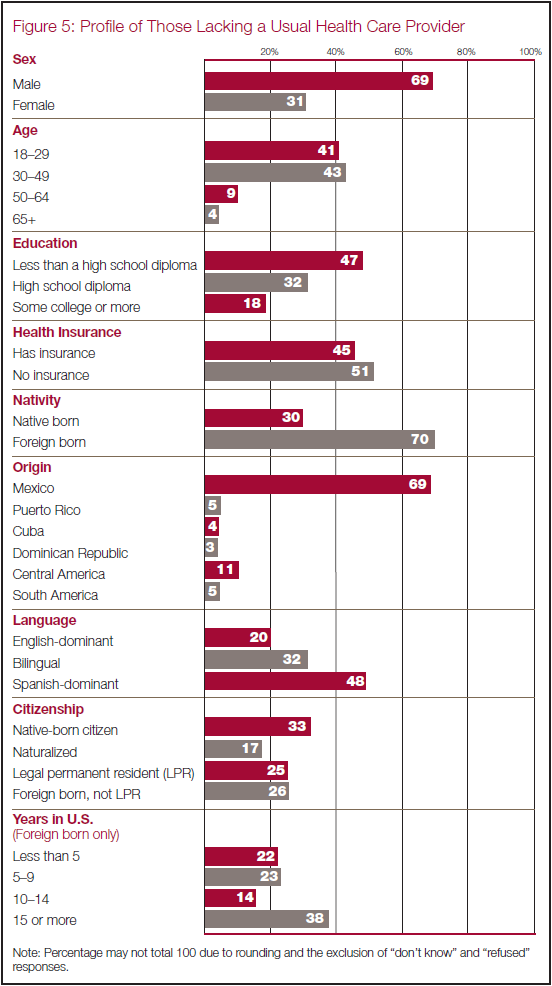 Why Don’t People Have a Usual Place for Health Care?

The survey asked respondents who lacked a usual place to get medical care or advice why they did not have one.* By far the most commonly cited reason was that they felt they did not need one because they are seldom sick (41 percent). An additional 13 percent report that they prefer to treat themselves than to seek help from medical doctors.

About 3 percent of Hispanics respond that difficulties navigating the health care system are to blame for their lack of a regular provider: 2 percent report that they do not know where to get regular health care, and about 1 percent reports that they were unable to find a provider who spoke their language.

Finally, 3 percent say they prefer to go to a number of different health care providers, not just to one place, and 4 percent say they have just moved to the area, so presumably have yet to establish a relationship with a provider. 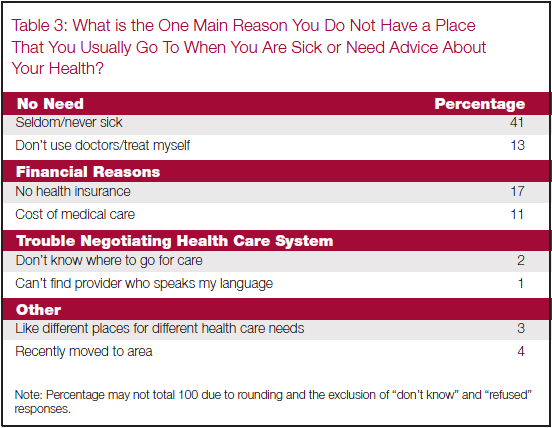 An overwhelming majority of Latinos believe that sick people should obtain treatment only from medical professionals, but a small minority say they seek health care from folk healers. Those who receive care from folk healers are slightly more likely to be U.S.-born than foreign born and to speak mainly English, not Spanish.

Asked whether they obtain care from a curandero, shaman or someone else with special powers to heal the sick, 6 percent of Hispanics say they do and 10 percent report that someone in their household receives such care.

Most Hispanics (87 percent) say that sick people should seek care only from medical professionals; only 8 percent say there is a role for folk medicine. Opinions about this echo usage patterns to some extent. Hispanics who speak English (14 percent), as well as those born in the United States (12 percent), are the most likely to say there is a role for potions and folk healing. So are younger Hispanics, as well as those with at least some college education. 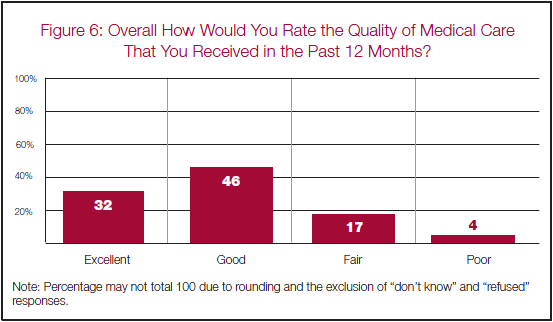 In general, more educated Latinos, and those who have access to the medical system, give better evaluations of the quality of their medical care than do Latinos with lower education levels, no insurance or no regular source of care.

Women are more likely than men to say their recent medical care was good or excellent, 80 percent to 74 percent. Eighty-one percent of the college-educated report being satisfied with their care, as compared with 75 percent of people lacking a high school diploma.

Having health insurance or a usual health care provider is associated with better perceived quality of care.

Among Hispanics with health insurance, 80 percent rate their care as good to excellent; among the uninsured, 70 percent do. Similarly, 80 percent of Latinos who have a usual health care provider rate their care as good to excellent, compared with 64 percent who have no usual provider. Among those with a usual provider, Hispanics who usually get care in doctors’ offices give higher ratings than those who go to medical clinics. Fully four in 10 who go to a doctor’s office rate their care as excellent, compared with 27 percent of those who get care from a clinic.

Generally, nativity and assimilation are not strongly associated with perceived quality of care. However, a mismatch between a Hispanic’s primary language and the language spoken at his or her appointment lowered the satisfaction ratings somewhat. For example, 30 percent of Spanish speakers whose appointments usually are conducted in English rate their care fair to poor, compared with 19 percent of those whose appointments are in Spanish.

Respondents were also queried as to whether they had received poor service at the hands of a health care professional in the past five years. Those 23 percent who said they had received poor treatment were asked about four potential reasons. The largest share of Hispanics (31 percent) cited their inability to pay as the reason for poor treatment, followed by their race or ethnicity (29 percent), their accent or how they speak English (23 percent) and their medical history (20 percent). 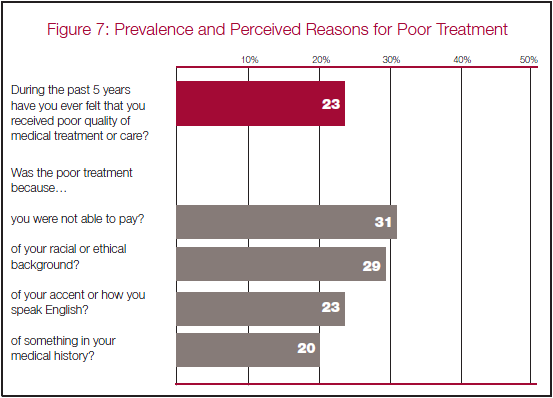 Other groups more likely than Hispanics overall to cite a lack of money as a reason for poor treatment include immigrants who aren’t citizens or legal permanent residents (45 percent), Spanish speakers (38 percent) and Latinos who did not graduate from high school (41 percent).

Among the groups most likely to cite language as the reason they received poor care are Hispanics with less than a high school education (37 percent), immigrants (33 percent) and those who mainly speak Spanish (43 percent).

Medical history is given as a reason for poor care by a somewhat higher share of older Hispanics (25 percent) and those whose primary language is Spanish (25 percent).

Next: IV. Sources of Information on Health and Health Care
← Prev Page
Page1Page2You are reading page3Page4Page5
Next Page →