Chronic conditions have large impacts on U.S. health and medical spending. According to the Centers for Disease Control and Prevention, 133 million U.S. residents have at least one chronic condition. Treating those diseases costs $1.5 trillion a year, which accounts for 75 percent of the nation’s spending on direct medical costs.5 Given the aging of the U.S. population, the prevalence of chronic disease and the rising costs of treatment, medical expenditures are expected to continue to go up.6 The size and rapid growth of the Latino population offers considerable reason to focus on its chronic disease management. Latinos will account for most of the U.S. population growth through 2050. While in 2007, Latinos comprised 15 percent of the U.S. population, or about 45.5 million people,7 projections based on current demographic trends suggest that by 2050, they will comprise upwards of 29 percent of the population, or 128 million people.8

Though they are now relatively youthful compared with the general population, Latinos will account for a growing proportion of middle-aged and elderly Americans in the future. By 2050, for example, the Hispanic share of the elderly population will almost triple to 17 percent from 6 percent in 2005. Furthermore, growth in the Hispanic population increasingly will be driven by births in the United States, rather than immigration from abroad.9 Since U.S.-born Hispanics tend to be less healthy than Hispanic immigrants, this compositional change may further predispose the population to chronic illness.

At present, Hispanics have a lower prevalence of many conditions than the population as a whole, but they have a higher prevalence of diabetes than non-Hispanic whites (see Table 1). Furthermore, their rates of overweight and obese adults are relatively higher than those of non-Hispanic whites, which puts Hispanics at greater risk for the development of diabetes and other health conditions.10 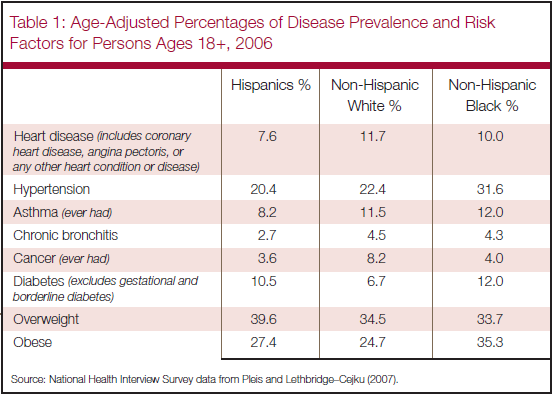 When people don’t get the information or treatment that would allow them to manage illnesses at an early stage or avoid a disease altogether, the costs of health care escalate and the burden of expensive late-stage medicine often falls to publicly funded health services. An important strategy to reduce chronic illness, and the costs associated with it, is through prevention via regular monitoring and educational initiatives.11

According to the CDC,12 the proportion of Hispanics who report that they have no usual place to receive health care is more than double that of non-Hispanic whites and non-Hispanic blacks.* Though it is more difficult to measure general knowledge and education about health issues among the population, the sheer diversity of the Hispanic population creates a challenge to information dissemination within medical environments as well as through public health campaigns.

In addition to divisions by gender, income and education, a number of other key characteristics distinguish Hispanics from each other. The language divide between Hispanics who are English speakers and those who are primarily Spanish speakers creates obstacles to public health campaigns and medical care. Differences between U.S.-born Hispanics and Hispanic immigrants, between Hispanic immigrants from different countries of origin, as well as differing rates of assimilation by Latino immigrants add to the complexity of understanding this rapidly growing population and determining how best to convey health information to it. 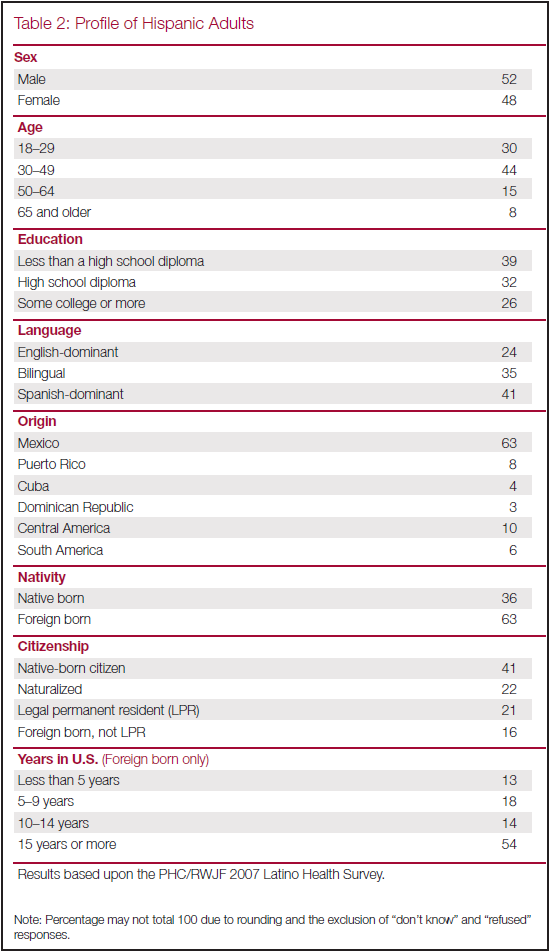 Next: III. Utilization of a Usual Health Care Provider and Satisfaction with Health Care
← Prev Page
Page1You are reading page2Page3Page4Page5
Next Page →