The latest trends in the labor market represent a dramatic reversal for Latinos. For several years, the construction industry contributed substantially to job growth for Hispanic workers, especially for those who were immigrants (Kochhar, 2006 and Kochhar, 2007). The ongoing slump in construction erased those gains, virtually in their entirety, within the past year. Mexican immigrants are among the most severely affected and newly arrived immigrants face daunting prospects in the labor market.

The slowdown in jobs growth affected both Latino and non-Latino workers. Non-Hispanics gained 356,000 new jobs in 2007, an increase of only 0.3%. Both figures were well below the previous year when non-Hispanic employment increased by 1.7 million, or 1.4%. 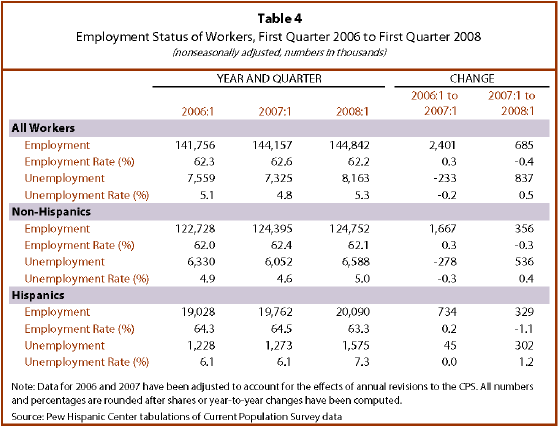 The rising tide of Latino unemployment fell mostly upon the shoulders of immigrant workers. In 2007, there were 255,000 more unemployed foreign-born Hispanics, compared with just 47,000 newly unemployed native-born Latinos (Table 5). In contrast, immigrants secured few of the new jobs going to Hispanics, only 70,000 compared with 258,000 for the native born. 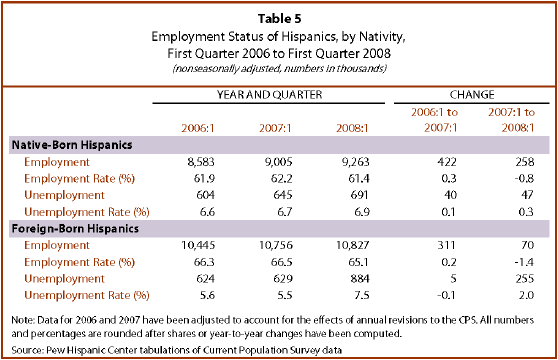 The diverging fortunes of immigrant and native-born Latino workers are the result of the slump in construction. At the beginning of the period, in the first quarter of 2007, 21.0% of immigrant Latinos were employed in the construction industry. That compared with only 7.9% for native-born Latinos. Thus, as the construction downturn persisted through 2007, it had a more severe impact on the employment of foreign-born Hispanics. 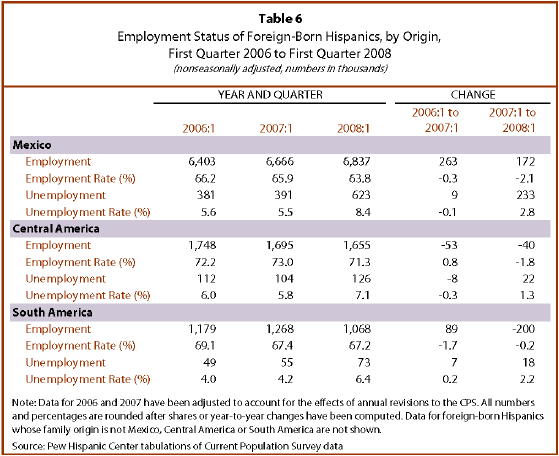 Immigrants who arrived in 2000 or later face a much harder task finding and keeping jobs than they did over the past few years. In previous reports, the Pew Hispanic Center has documented the key role of the construction industry in absorbing newly arrived Latino immigrants (Kochhar, 2006 and Kochhar, 2007). The unemployment rate for immigrants who arrived in 2000 or later years now stands close to the double-digit mark, increasing from 7.1% in the first quarter of 2007 to 9.3% in the first quarter of 2008 (Table 7). 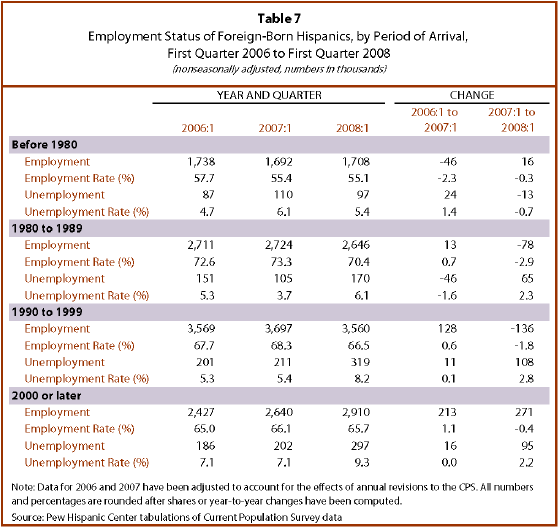 Next: VI. Changes in Employment for Hispanic Men and Women, 2006 and 2007
← Prev Page
Page1Page2Page3Page4You are reading page5Page6Page7Page8Page9Page10
Next Page →