A majority of respondents to this survey see discrimination against Latinos as a big problem that is keeping Hispanics from succeeding in this country, and about four-in-ten report that they or someone close to them has been a target of discrimination in the past five years. However, most say that these personal experiences with discrimination occur infrequently.

Perceptions of Discrimination Against Latinos

The perception among Latinos that discrimination is a major problem preventing Latinos from succeeding in this country has risen substantially since 2002, when 44% of Hispanics felt this way. But it has declined slightly since 2006, when 58% felt this way.

Generally, the survey finds that perceptions of discrimination among Hispanics are related to nativity, to language usage patterns and to educational and economic attainment. Foreign-born Latinos are more likely than those born in the United States to believe discrimination overall is a major problem, and those who are Spanish dominant are more likely than those who are English dominant to say so. Among both foreign-born Latinos and Spanish speakers, however, the proportion who call discrimination a major problem has declined a bit more in the last year than it has among Hispanics overall.

Nearly two-thirds of Hispanics (64%) now say that discrimination against Latinos is a major problem in schools; in 2002, just 38% said so. The proportion believing this now is especially high (73%) among foreign-born Hispanics.

In the workplace, 58% of Latinos say that discrimination is a major problem, an increase from 41% in 2002. Here, too, the concern is even larger for the foreign-born, 65% of whom describe it as a major problem.

In schools and the workplace, discrimination is more likely to be seen as a major problem by Hispanics who have less than a college education, compared with those who have more education, and by those who are unemployed, compared with those who are employed. Also, Hispanics who were born in the United States, and especially those whose parents also are native born, are less likely to perceive a problem than are foreign-born Hispanics.

Latinos who say their local officials and political leaders have paid a lot of attention to the illegal immigration issue in recent months are more likely than other Hispanics to describe discrimination as a major problem hindering Hispanic success—59% do. They also are more likely than other Latinos to share the belief that school and workplace discrimination is a major problem. 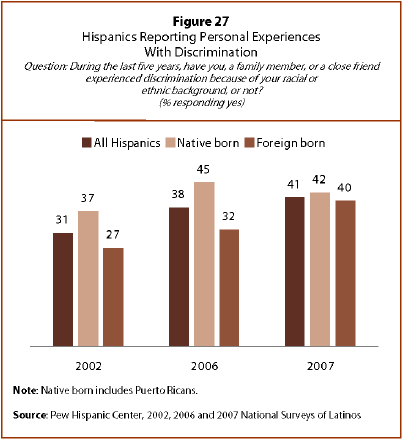 Asked about specific types of discrimination, most Latinos say that at one time or another, they have received less respect than other people (62%) or been given poorer service in restaurants or stor(53%) because of their race or ethnicity. More people who report receiving less respect or poorer service say it has happened once in a while, rather than often.

When asked about another specific type of discrimination, some 45% of Latinos say they have been treated poorly in government offices because of racial or ethnic bias. Most who report this say it happened just once in a while. Also, 16% of Latinos report that at some time in their lives they were not hired for a job or were denied a promotion because of their race or ethnicity.

As with other questions about discrimination, there are demographic divisions within the Hispanic community. Non-citizens are more likely than citizens to say they have been given less respect, poorer service in restaurants or stores, or poor treatment in government offices. Similarly, foreign-born Hispanics are more likely than native-born Hispanics to say they have received poor service or treatment in restaurants, stores and government offices. The same is true for those who are Spanish dominant compared with those who are English dominant.

As to the major causes of discrimination against Hispanics, when offered four options, more Latinos choose language (46%) than other possible factors. By comparison, 22% choose immigration status; 16% choose income and education levels; and 11% choose skin color.

Hispanics say language is the biggest cause of discrimination, and this is true no matter what their educational background, citizenship status, primary language, political party affiliation or country of origin.

But there is some variation by demographic group in the proportion choosing each of the four possible principal causes of discrimination. Language is chosen by a greater share of foreign-born Latinos (50%) than the native born (41%). Income and education levels are selected by a greater share of native-born Hispanics (25%) than the foreign born (11%).

Next: Appendix A: Survey Methodology
← Prev Page
Page1Page2Page3Page4Page5You are reading page6Page7
Next Page →