How the estimates are formulated

The estimates reported here are based on this methodology applied to data from the March 2005 Current Population Survey (CPS). The CPS, a monthly survey of about 50,000 households conducted jointly by the U.S. Bureau of Labor Statistics and the Census Bureau, is best known as the source for monthly unemployment statistics. Every March both the sample size and the questionnaire of the CPS are augmented to produce the Annual Social and Economic Supplement, which provides additional data on several additional subjects, including the foreign-born population. See “Note on Methods and Terminology” below for definitions, data sources, and methods. A report based on data from the March 2004 CPS was published by the Center on June 14, 2005 and can be accessed at the following link: Unauthorized Migrants: Numbers and Characteristics

This methodology uses the term “unauthorized migrant” to mean a person who resides in the United States, but who is not a U.S. citizen, has not been admitted for permanent residence, and is not in a set of specific authorized temporary statuses permitting longer-term residence and work. (See Passel, Van Hook, and Bean 2004 for further discussion.) Two groups account for the vast majority of this population: (a) those who entered the country without valid documents, including people crossing the Southwestern border clandestinely; and (b) those who entered with valid visas but overstayed their visas’ expiration or otherwise violated the terms of their admission. Some individuals in our estimated unauthorized migrant population initially belonged to one of these groups but have obtained a temporary legal authorization to live and work in the United States. These individuals, many of whom are likely to revert to an unauthorized status, include migrants with temporary protected status (TPS) and others with unresolved asylum claims. Together they may account for as much as 10% of the estimate. In assessing potential programs for dealing with the unauthorized population, it seems appropriate to treat the quasi-legal group as part of the unauthorized program since a significant share of this group would probably be eligible to participate in any program that might lead to regularization of their status, such as a temporary worker program or an earned legalization program. (For an opposite view, see Martin 2005.)

As of March 2005, there were an estimated 11.1 million unauthorized migrants living in the United States. A comparison to past estimates derived with the same methodology shows that the undocumented population has grown rapidly in recent years. There were 8.4 million unauthorized migrants living in the United States in April 2000 according to estimates derived from Census 2000 (Passel, Van Hook, and Bean 2004). Thus, average annual growth over the 5-year period since 2000 was more than 500,000 per year. This number reflects the number of new unauthorized migrants arriving minus those who either die, return to their country of origin, or gain legal status. Data from the monthly Current Population Surveys conducted since March 2005, as well as other evidence such as the number of apprehensions by the Border Patrol, indicate that the unauthorized flow is continuing. Assuming that the rate of growth evident between Census 2000 and the March 2005 CPS held steady, the best estimate for March 2006 is between 11.5 million and 12 million for the current number of unauthorized migrants.

Most unauthorized migrants arrived in the past decade 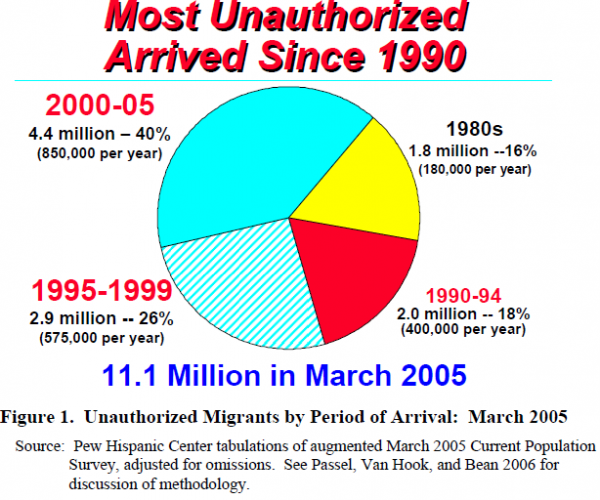 The March 2005 estimates are consistent with earlier findings which show that the pace of the unauthorized arrivals accelerated at the end of the 1990s and the early years of this decade (Passel and Suro 2005). Between 2000 and 2005 the number of new arrivals averaged 850,000 a year. Note that this number is higher than the annual net increase to the population because it only measures the number of unauthorized migrants being added to the population and does not subtract the number who either die, return home or gain legal status. 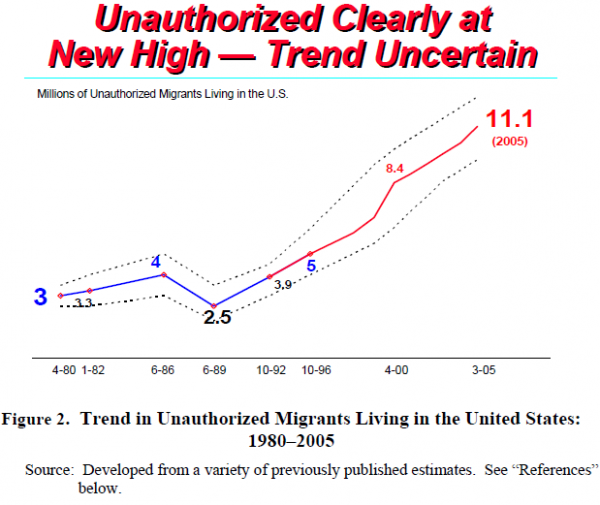 The unauthorized are 30% of the foreign born population

The foreign-born population totaled 37 million in the March 2005 estimates, including: 11.5 million naturalized citizens (31%), 10.5 million legal permanent resident (LPR) aliens (28%), 2.6 million refugees (7%) and 1.3 million temporary legal migrants such as students and temporary workers (3%). The rest of the foreign-born population 11.1 million or 30% are unauthorized migrants. 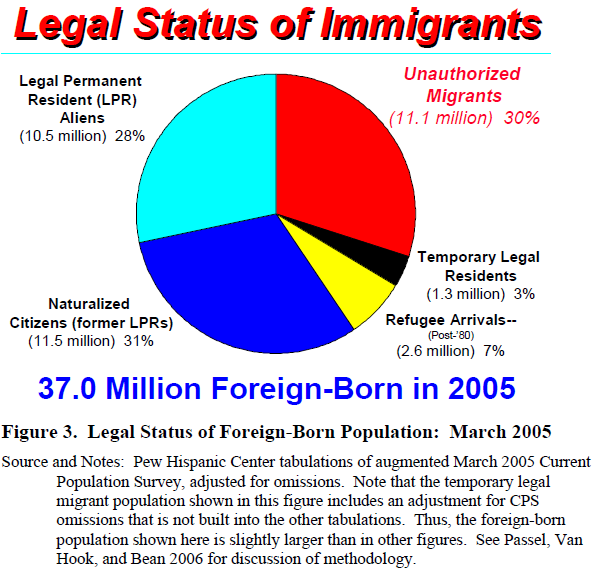 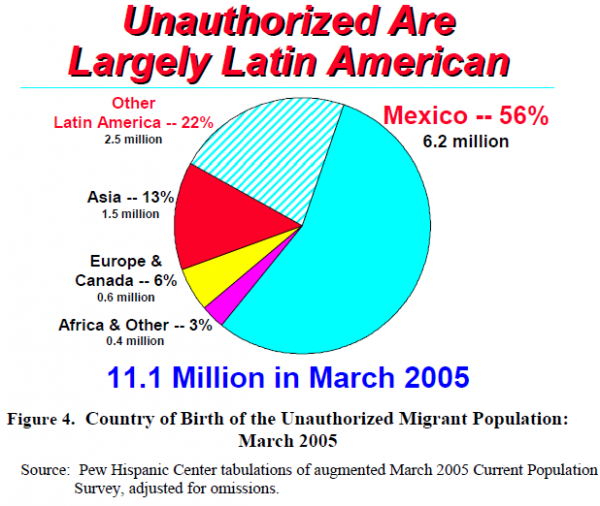 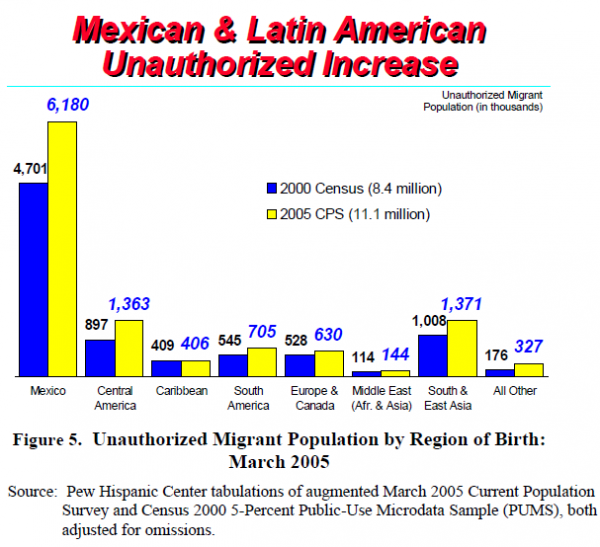