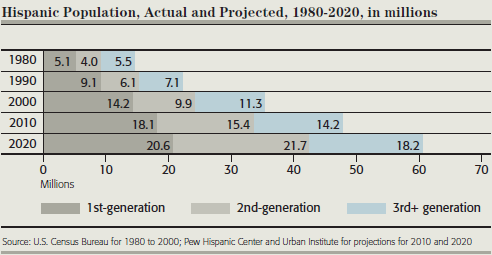 As the Latino population grows, its composition is undergoing a fundamental change. Births to Hispanic immigrants, rather than immigration itself, will be the key source of population growth in the near future. By 2020, second-generation Hispanics are projected to reach 21.7 million in number, representing 36% of the overall Hispanic population, up from 9.9 million in 2000, when they represented 28%. Latino immigrants will increase in number to 20.6 million from 14.2 million by 2020 but their share will diminish to 34%, from 40%. The remaining 18.2 million Hispanics are expected to be third- or higher-generation Hispanics — those who were born in this country and whose parents were born here as well. 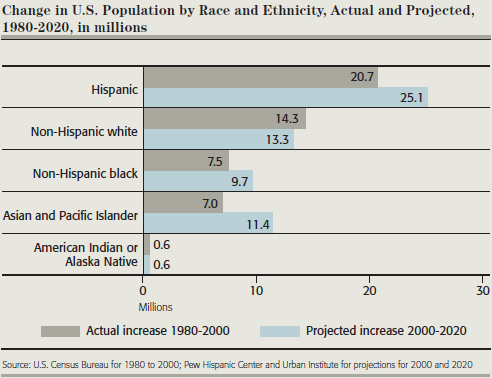 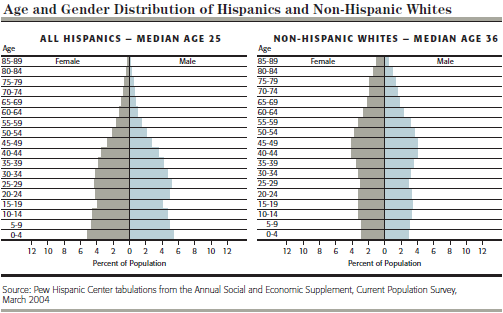 Hispanics are relatively concentrated geographically. Nearly 80% live in California, Texas, New York, Florida, Illinois, Arizona, New Jersey, New Mexico or Colorado. But as the Hispanic population grew between 1980 and 2000, it also dispersed somewhat. Tracking that movement requires examining both the speed and the size of growth in new areas. In addition to Florida, seven states — Oregon, Washington, Nevada, Georgia, North Carolina, Virginia and Massachusetts — saw growth that was both fast (increases of more than 200%) and sizable (more than 200,000 additional Hispanics per state). States with established Hispanic populations, such as California, also saw their numbers grow substantially, but because they started with a large base, the rate of growth was slower. States with an emerging Hispanic population, such as Nebraska and Kansas, produced smaller absolute numbers (increases of fewer than 200,000 Hispanics between 1980 and 2000) but very high rates of growth (more than 200%). 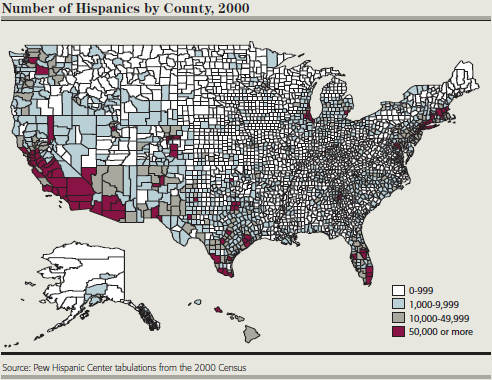 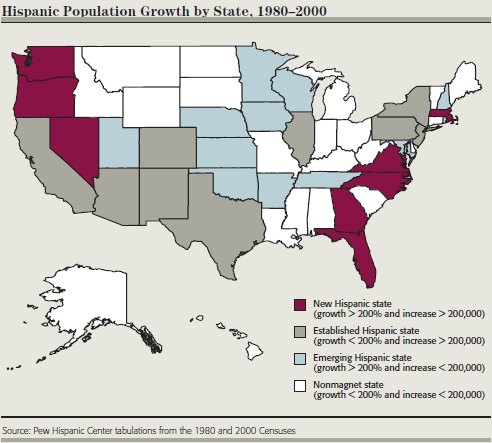 Despite their geographic concentration, most Latinos live scattered through neighborhoods where they are a small share of the population. Some 20 million Hispanics — 57% of the total — lived in neighborhoods in which they made up less than half the population at the time of the 2000 census. These Latinos lived in census tracts where, on average, only 7% of residents were Hispanics. This pattern of dispersal even holds for Latino immigrants and for low-income Hispanics, although to a lesser degree.

“As of 2000, 57% of all Hispanics were dispersed, while 43% were living in Latinomajority neighborhoods. By this measure, the Hispanic population is somewhat less concentrated than the African-American population.”

Next: III. Hispanics in the Labor Force
← Prev Page
Page1You are reading page2Page3Page4Page5
Next Page →

Hispanics: A People in Motion
II. Demographics
III. Hispanics in the Labor Force IV. Hispanics in Schools and Colleges V. Assimilation and Attitudes