Organizations that track gender equality across a variety of outcomes related to health, economics, politics and education – such as the United Nations Development Program and the World Economic Forum – find widespread inequality. For example, women account for less than half of the labor force globally, and few nations have ever had a female leader.

In their most recent Global Gender Gap report, the World Economic Forum projects that it will take more than a century to close the current gender gap in the countries it covers. Yet, overall trends show increasing gender equality in many countries.

People around the world seem cognizant of these changes in their own country. Majorities in 23 of the 27 countries surveyed believe that equality between men and women in their country has increased in the past two decades.

Many in the Asia-Pacific region view their countries as becoming more egalitarian, including roughly three-quarters of Indonesians (77%), Indians (76%), Australians (75%) and South Koreans (74%). A majority of Japanese also hold this view, though 34% say there has been no change in the past two decades. Filipinos are divided, however. Fewer than half (46%) believe men and women have become more equal in their country, while the same share believes there has been no change. 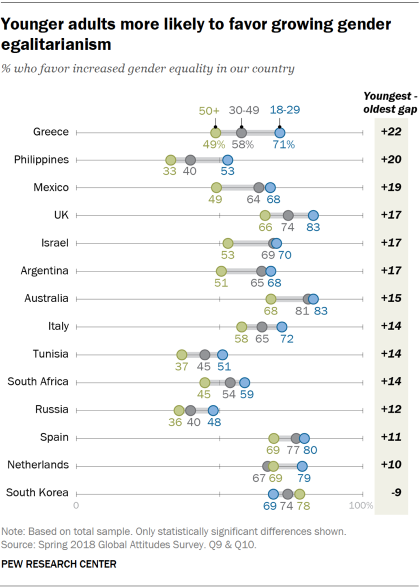 In about half of the countries surveyed, younger adults are more likely to favor increasing gender equality than adults ages 50 and older.

In Greece, 71% of people ages 18 to 29 approve of greater equality in their society, compared with 49% of people 50 and older. A similarly large age difference is found in the Philippines, where 53% of young adults but only 33% of older adults favor more equality between men and women.

In South Korea, this pattern is reversed; older adults are more likely than younger adults to approve of increased equality. 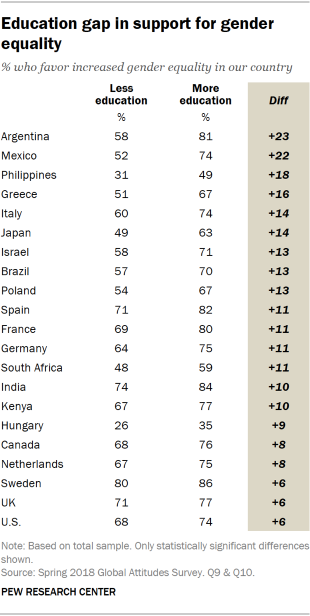 Attitudes toward increasing gender parity also differ by educational attainment. In 21 countries, people with more education are more likely than those with less education to favor growing equality.

Differences by education can also be found in the U.S., Canada, and all European countries surveyed.

There are few ideological differences in support for greater gender equality, but in Sweden and France – two countries with strong support overall – some partisan differences emerge. People who hold a favorable view of France’s National Rally are less likely to favor increasing gender parity (64%) than those with an unfavorable view of the party (76%). Similarly, people with a favorable opinion of the far-right Sweden Democrats (76%) are less likely than people with an unfavorable opinion (85%) to approve of gender equality, though support is generally high among both groups.

Next: 3. How people around the world view religion’s role in their countries
← Prev Page
Page1Page2You are reading page3Page4Page5Page6Page7
Next Page →