Is diversity on the rise? Has gender equality increased? Does religion play a more or less important role than in the past? And are family ties stronger or weaker than they used to be? Pew Research Center posed these questions to 30,133 people in 27 countries. 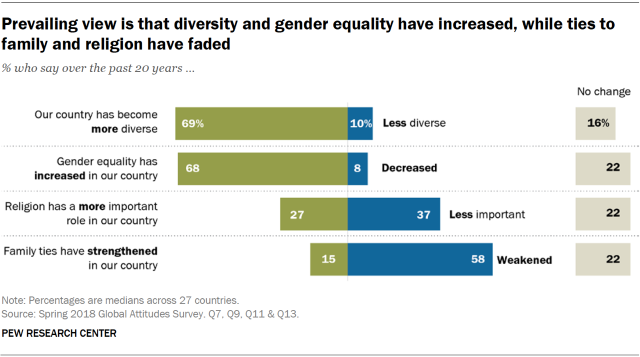 The results are clear on three of these aspects. Medians of around seven-in-ten say their countries have become more diverse and that gender equality has increased over the past 20 years. And roughly six-in-ten across the countries surveyed say that family ties have weakened.

On the importance of religion, there is more variation by country. Overall, a median of 37% say that religion plays a less important role in their countries than it did 20 years ago, while 27% say it plays a more important role.

For all four questions, a sizable portion of the population (about one-in-five) say there has been no change over the past two decades.

These questions measure whether people perceive change. But how do people feel about social and cultural change itself?

To better understand this, we added a follow-up to our initial questions on diversity, gender equality, family ties and religion: Is this a good or bad thing for the country? To accurately classify these responses, we took people who said there was an increase (for example in diversity) and that this was a good thing, and then combined them with people who said diversity had decreased and they felt this was bad. On the other side, we combined people who said there was an increase and that it was bad with those who saw a decrease in diversity and thought it was good for society. 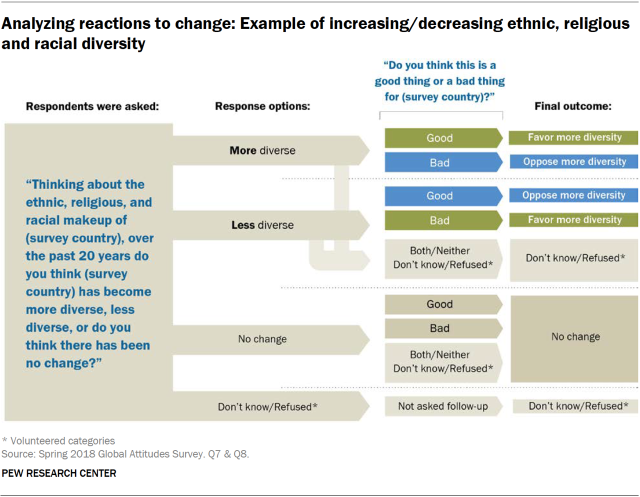 This allowed us to gauge support for increasing or decreasing diversity, gender equality and a more important role for religion in their countries. Since large majorities in most countries told us that family ties were weakening and that it was a bad thing, we did not do this analysis on that question.

One difficulty in the way this question was constructed and analyzed is that people who say that there has been no change in their country on the various issues are kept in the “no change” column for the follow-up analysis. So, for those who have perceived no change – and thus, no effect from change – it’s hard to determine whether they think the status quo is good because there has not been societal change, or bad because society has not changed enough. 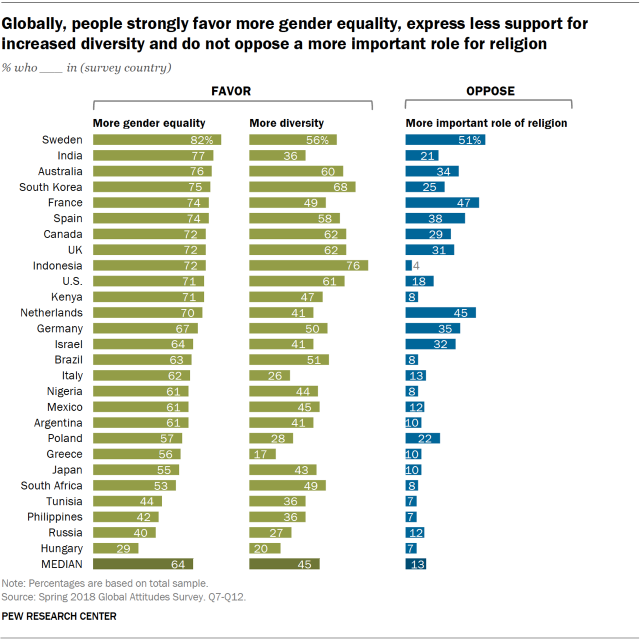 The results of this analysis reveal people are strongly in favor of increased gender equality but share more tepid enthusiasm for increased ethnic, religious and racial diversity. And despite secularization trends, most across the 27 countries surveyed do not oppose a more important role for religion in their society.

Pew Research Center has been researching the concept of cultural change for almost two decades. In 2002, the first 44-nation Global Attitudes Survey was primarily focused on the concept of “globalization” and how that impacts people’s lives in countries around the world. Back then, at a time when rapid technological advances were starting to make their way across the globe and interconnectedness was becoming a fact of life, people were positive about many of the economic and cultural changes that were taking place. And young people were especially keen on globalization.

In 2007, the Center again embarked on a study about globalization and its effects in a survey of 47 nations. As in 2002, we saw widespread support for the economic benefits of globalization, including trade and free markets. But these results were tempered by concerns about the downsides of such rapid change. “There are widely shared concerns about the free flow of people, ideas and resources that globalization entails. In nearly every country surveyed, people worry about losing their traditional culture and national identities, and they feel their way of life needs protection against foreign influences. Importantly, the poll finds widespread concerns about immigration. … Those who worry the most about immigration also tend to see the greatest need for protecting traditional ways of life against foreign influences.”

The survey also found “egalitarian” views about gender roles in terms of equal education for boys and girls and female political leadership. In 2010, a follow-up study in 22 nations suggested that people around the world still believed that women should have equal rights to men and that boys should not have preferential treatment in pursuing higher education. However, in many countries people acknowledged that gender inequality still existed and that men often had better lives than women.

By 2013, the Center was keen on exploring questions about diversity, morality and acceptance of minorities to help better understand the changing nature of global culture. Here, there were some stark reminders that huge divides still existed between countries with more advanced economies and those still emerging and developing. For example, on the topic of gay rights, the 2013 survey in 39 countries showed massive differences between the 88% acceptance of homosexuality in Spain and the 1% acceptance in Nigeria. And on a host of other questions about values, such as alcohol use and divorce, there were stark divides between those in countries with a strong affinity for religion and those where religion has become less important. But the West was certainly not free of doubts about diversity and the effects of cultural change on their countries.

In 2015, a massive influx of refugees from the Middle East and North Africa poured into Europe, causing substantial rifts among many political coalitions in prominent European countries. By 2016, the Center was tracking both attitudes toward the government’s response to the refugee crisis and overall views of diversity and immigration. On both counts, Europeans questioned their government’s handling of the refugee issue (and the European Union’s) and expressed concerns about growing diversity in their countries.

We continue to explore key aspects of globalization and its economic effects in the present day. In 2018, we again found that people like the concept of free trade but are not wholly convinced of its benefits. In addition, when asked about the financial situation of average people in their country, many say that average people are worse off compared with 20 years ago.

On the concept of the importance of religion among the world’s population, a 2018 analysis of 106 countries demonstrates that people are generally more religious in Africa, the Middle East, South Asia and Latin America, and generally less religious in Europe, North America, East Asia and Australia. This helps explain some of the variation on whether the changing importance of religion is a good thing or bad thing in the current study.

In sum, the concept of globalization is one that will continue to be reflected in our research as we try to understand public opinion in an ever-changing world. This study seeks to answer just a small part of that change, which will engage researchers for years to come.

Views of diversity in North America, Europe and Australia

Across Europe, North America and Australia, there is strong consensus that diversity has increased in their countries. And for the most part, that diversity is welcomed. Two exceptions are Greece, where 62% oppose a more diverse country, and to a lesser extent Italy, where 45% oppose diversity. But in the United Kingdom, Canada, the United States, Australia and Spain, roughly six-in-ten say they are in favor of more diversity.

There are divides, however, within countries across a variety of demographic and political groups. In Europe, North America and Australia, people who are more in favor of diversity tend to be younger, have more education and place themselves on the left end of the political spectrum. 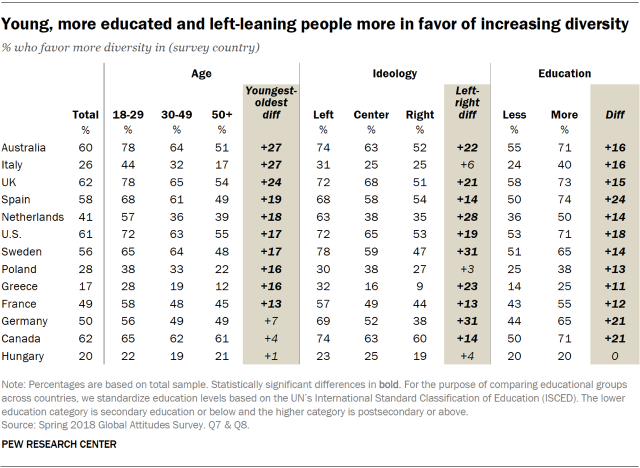 In several European countries, people with favorable opinions of right-wing, anti-immigration parties are more opposed to increased diversity in their country. For example, those that have a favorable view of the Sweden Democrats are roughly three times less likely to favor more diversity than are those who have an unfavorable view of this party. Similar differences appear between supporters and nonsupporters of AfD in Germany, PVV in the Netherlands, UKIP in the UK and National Rally (formerly National Front) in France. (See Chapter 1 for more information.)

In many of the countries surveyed, men are more likely than women to say that gender equality has increased in their country over the past 20 years.

For example, 78% of German men say that gender equality has increased over the past 20 years, versus only 62% of women. Double-digit differences also occur in Japan, the UK, Canada, South Korea, the Netherlands, Spain, the U.S., Sweden and Kenya.

However, women are also more likely than men to say that there has been no change in gender equality in their countries over the past 20 years. This is true in 11 of the countries surveyed.

Opinions vary widely across the countries surveyed on whether religion plays a more or less important role compared with 20 years ago. Those saying religion is more important ranges from 7% in Spain and 8% in Japan to 83% in Indonesia and 65% in Nigeria.

But overall, there is a strong correlation between those who see religion’s role in society growing and those who think religion is very important in their lives (+0.73). 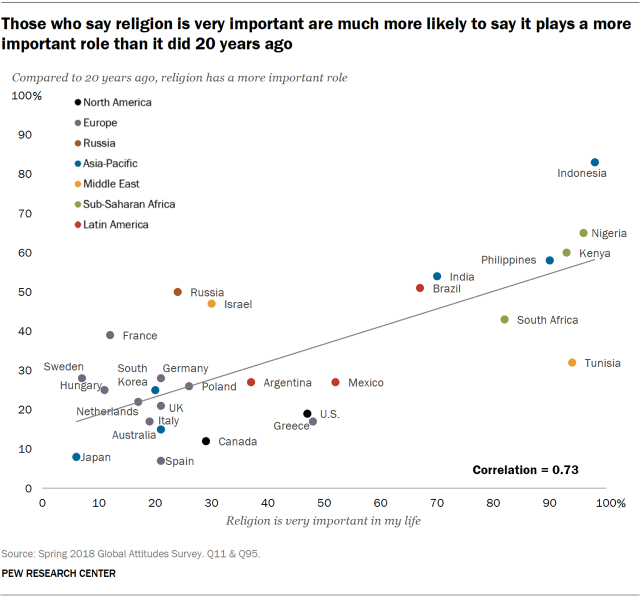 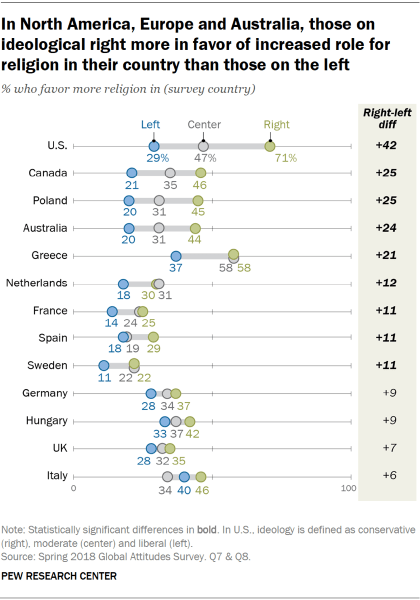 In Europe, North America and Australia, ideology is linked to whether people want a more prominent role for religion in their country. For example, in the U.S., people on the right end of the political spectrum (those who consider themselves somewhat or very conservative) are 42 percentage points more likely than those on the left to favor a larger role for religion in their country. While this is the largest political divide measured, substantial differences exist between left and right in many countries.

Next: 1. How people around the world view diversity in their countries
← Prev Page
You are reading page1Page2Page3Page4Page5Page6Page7
Next Page →