Confidence in the American president to do the right thing regarding world affairs is largely unchanged this year – with a few notable exceptions – from 2017. A median of 27% in 25 nations surveyed say they trust in President Donald Trump’s handling of international issues, while 70% do not have confidence in him. In only four countries – the Philippines, Israel, Nigeria and Kenya – does more than half the public voice trust in the U.S. president. Such confidence has gone up significantly in only three nations – South Korea (up 27 percentage points), Israel (up 13 points) and Poland (up 12 points). It is down significantly in Russia, by 34 percentage points.

Regionally, a median 18% of Europeans surveyed are positively disposed toward Trump, but 82% say they lack confidence in the current U.S. leader. And for many this is a fairly intense sentiment: 69% of French, Germans and Spanish; 56% of Swedes; and roughly half of Dutch and Greeks say they have no confidence at all in Trump.

Trump fares slightly better in the Asia-Pacific region, where a median of 32% see him favorably and 54% lack confidence. Opinions differ widely in the region: 78% of Filipinos give Trump a thumbs-up, but 66% of Japanese and Australians are not confident in him. In the three Latin American nations polled, overwhelming majorities say they have no confidence in Trump, including 78% of Mexicans who say they have no confidence at all. Among the limited number of African countries surveyed, majorities in Kenya and Nigeria express confidence in the U.S. president. 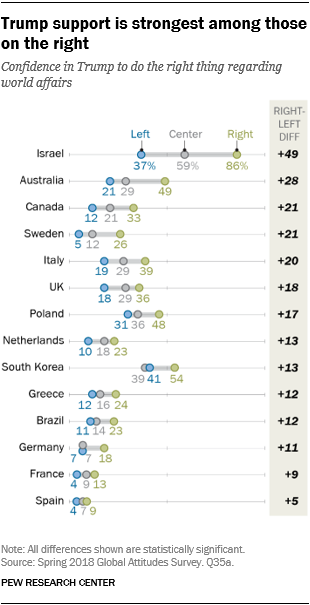 In 11 of 25 nations, even where Trump’s support is quite low, men more than women trust his handling of world affairs. The gender gap is largest in Australia (14 points), the UK (13 points) and Japan (12 points).

In some countries, religion and ethnicity also play a role in views of the U.S. president. In Israel, 82% of Jews but only 19% of Arabs have confidence in Trump’s handling of international relations. In Nigeria, two-thirds of Christians and half of Muslims express confidence in him.

Ideology is a strong indicator of support around the world for President Trump. Adults in survey countries who place themselves on the right of the political spectrum are often significantly more likely than those on the left to express confidence in the U.S. president. In Israel, for example, support for Trump is much stronger among those on the right (by 49 points). There is a similar 28-point ideological gap in backing for Trump in Australia and a 21-point divide in Canada and Sweden. Notably, even in those nations where opinions divide along ideological lines, Trump often enjoys the support of fewer than half of those who self-identify with the political right.

Globally, trust in Trump trails that of Merkel, Macron

Compared with some other prominent global leaders, President Trump fares relatively poorly in the eyes of much of the public.

Roughly half of those surveyed have confidence in Angela Merkel, the chancellor of Germany, and around a third voice no confidence. Her backing is strongest in the Netherlands (85%), Sweden (82%) and France (78%), all nations where her support is stronger than it is in her native Germany. Notably, while 68% of Germans express faith in Merkel, that backing is down 13 percentage points since 2017. The erosion of her German support has come entirely among those who say they have “a lot of confidence” in her. Her weakest backing in Europe is in Greece (15%), Hungary (31%) and Poland (37%). She has strong support in much of the Asia-Pacific, except in Indonesia, where 32% are confident in her. Merkel is a conservative, yet it is Germans who self-identify as ideologically on the left (74%) who have greater confidence in her than those on the right (59%). Similarly, Poles on the left (75%) are much more likely than Poles on the right (26%) to voice trust in the German chancellor. The same pattern is found in Hungary, the UK and Israel.

A median of slightly fewer than half (46%) of the adults surveyed express trust in French President Emmanuel Macron’s conduct of foreign policy. Roughly a third (34%) lack confidence. More than seven-in-ten Germans, Dutch and Swedes express trust in Macron to do the right thing in world affairs, as do nearly two-thirds of French adults (64%). But it is French on the right (72%) and those who are avowed centrists (71%) who are bigger fans of the French president than are those on the left (49%). Notably, Germans (30%) are twice as likely as French (15%) to say they have a lot of confidence in the French leader. Fewer than half of those surveyed in Africa and about one-in-five in Latin America trust Macron’s handling of international issues, but the share of adults who express no opinion is relatively high in those countries, possibly reflecting a lack of name recognition.

A median of 34% across the countries surveyed voice confidence in Chinese President Xi Jinping, while 56% lack confidence in him. His strongest backers are in the Philippines (58%), Kenya, Nigeria and Tunisia (all 53%), and Russia (50%). And his support is up 22 points in Tunisia and 12 points in Canada. Confidence in Xi is particularly low in Latin America, where many have no opinion of the Chinese leader, and in parts of Europe. Just 9% of Poles and 11% of Greeks trust Xi. Confidence in Xi in the three African nations surveyed is higher than in any European country polled. Notably, in Australia and Poland it is young people – those ages 18 to 29 – who are more supportive of Xi than their elders – those 50 years of age and older. 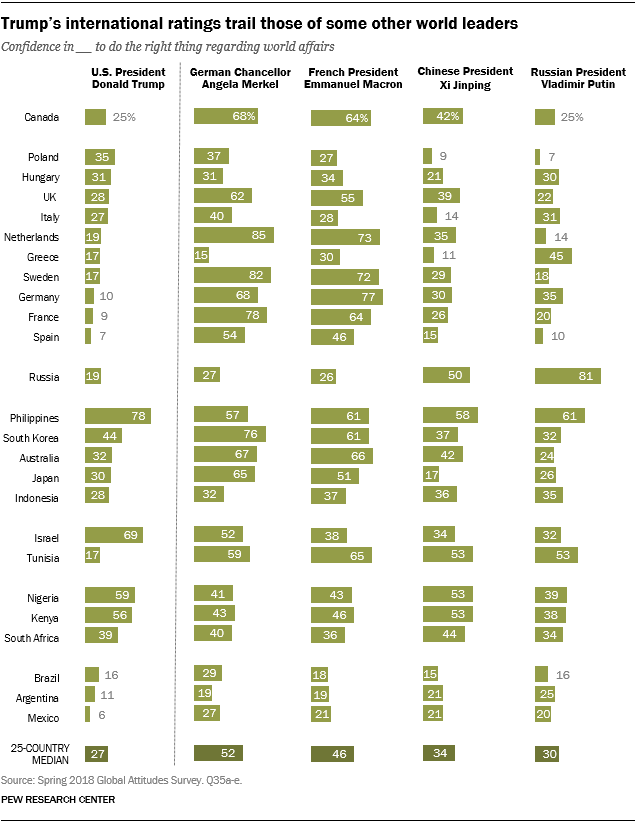 Russian President Vladimir Putin has the confidence of a median of 30% in the survey, with 62% expressing no confidence in his handling of world affairs. Around eight-in-ten Russians (81%) trust him in this arena. Roughly six-in-ten in the Philippines (61%) and half in Tunisia (53%) are supportive. In Europe, his strongest backing is in Greece (45%) and Germany (35%). His weakest support is in Poland (7%). A median of 48% in Europe say they have no confidence at all in Putin. Far fewer than half of those surveyed in Africa, Latin America and in most of the Asia-Pacific nations trust Putin in dealing with international relations, although many Africans and Latin Americans express no opinion.

Next: 3. China’s power seen as rising more than other major nations
← Prev Page
Page1Page2You are reading page3Page4Page5Page6Page7Page8Page9
Next Page →