It is a fundamental principle of modern free-market economic theory that trade enhances competition and thus enables consumers to enjoy lower prices than they would have to pay if they depended solely on domestic production of the goods and services they consume.

In six of the 27 countries surveyed, young people, those ages 18 to 29, are significantly more likely than those ages 50 and older to think trade lowers prices. The most notable are again in Sweden, where there is a 21-percentage-point difference between young people’s views and those of their elders, and the Netherlands, where the difference in views between age groups is 27 points. 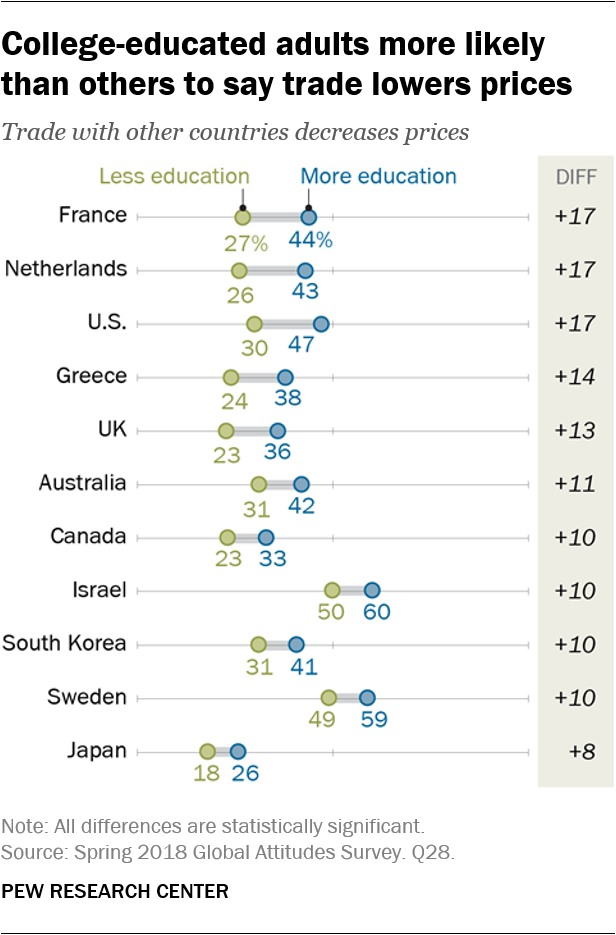 In 9 of 27 nations men are more likely than women to believe that trade contributes to lower prices. But only in Sweden does that represent a majority of men.

Americans, Like Many in Other Advanced Economies, Not Convinced of Trade’s Benefits 1. Spotlight on views of trade in the U.S., EU and Japan 2. Trade widely seen as good 3. Advanced and emerging economies differ over trade’s impact on job creation 4. Nearly half of adults in emerging markets say trade raises wages
5. Public views on trade and prices are at odds with economic theory
Acknowledgments Methodology Appendix: Economic Categorization