In six of 18 advanced economies, half or more of the public thinks trade leads to employment creation. Those who are most likely to see trade as a job generator are the Dutch and the Poles. Since 2000, both trade of goods and services and exports as a share of gross domestic product (GDP) have gone up significantly in both nations. The portion of the adult population that is employed remained relatively unchanged in the Netherlands between 2000 and 2017, but in Poland that share has gone up by more than 6 percentage points, suggesting that, at least in Poland, faith in trade as a job creator may reflect recent experience.

Meanwhile, more than half the adults in both Argentina and Italy say trade destroys jobs. In both nations trade and exports as a portion of GDP have gone up since the beginning of the century. And the share of the population in each country that is employed is relatively unchanged.

More than half the public in emerging markets believes trade creates employment. Those who most enthusiastically embrace international commerce as a job maker include roughly two-thirds of Tunisians and Kenyans. Notably, their experiences have been quite different. In Tunisia, total trade as a percentage of GDP and exports as a share of the economy have gone up since 2000. But the employment rate in Tunisia is effectively unchanged. In Kenya, trade and exports as a portion of the GDP have gone down, while the employment rate has fallen more than 5 points.

A respondent’s level of education markedly affects his or her views of the relationship between trade and employment. In 19 of the 27 countries surveyed, those with a higher level of education are more likely than those with less education to believe that trade creates jobs. The largest divides in public views of the impact of trade on employment are in Mexico, with a 20-point difference, and in Russia, at 19 points. 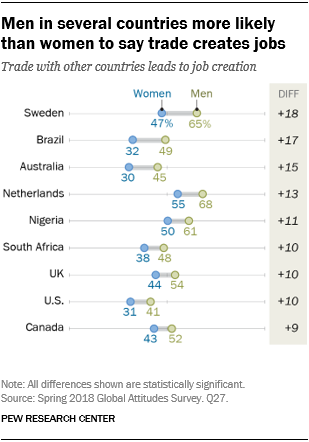 Gender also plays a role in such sentiment. In nine of 27 nations, men are more likely than women to believe that trade creates jobs. This includes an 18-point gender gap in Sweden, a 17-point differential in Brazil and a 15-point divide in Australia.

Next: 4. Nearly half of adults in emerging markets say trade raises wages
← Prev Page
Page1Page2Page3You are reading page4Page5Page6Page7Page8Page9
Next Page →

Americans, Like Many in Other Advanced Economies, Not Convinced of Trade’s Benefits 1. Spotlight on views of trade in the U.S., EU and Japan 2. Trade widely seen as good
3. Advanced and emerging economies differ over trade’s impact on job creation
4. Nearly half of adults in emerging markets say trade raises wages 5. Public views on trade and prices are at odds with economic theory Acknowledgments Methodology Appendix: Economic Categorization