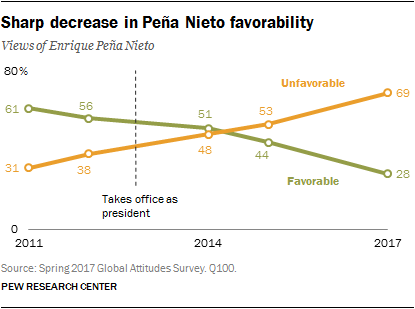 President Enrique Peña Nieto’s popularity has continued to plunge since Pew Research Center began asking about him in 2011. Today, 28% of Mexicans express a favorable opinion of the Mexican president, less than half the share that supported him in 2011 (61%). The current favorability rating marks a 16- percentage-point drop since 2015 and a 28-point drop since the Center’s 2012 poll, conducted just months before he was elected president.

Even within his own party, Peña Nieto is suffering, though he retains majority support. Six-in-ten Mexicans who identify with the PRI view him favorably, down from 78% in 2015. 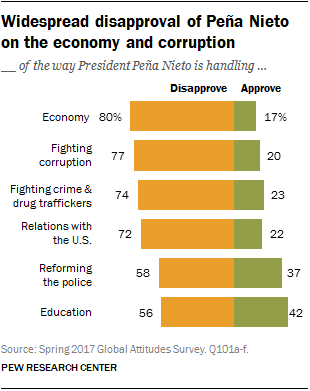 Satisfaction with Peña Nieto’s handling of relations with the United States has taken a sharp hit since 2015, coinciding with Peña Nieto’s invitation in 2016 to then-candidate Donald Trump to visit Mexico. While just over half (53%) disapproved of his handling of relations with the U.S. in 2015, roughly seven-in-ten (72%) say they disapprove today.

Peña Nieto receives slightly better marks for his handling of police reform and education, although majorities continue to disapprove. 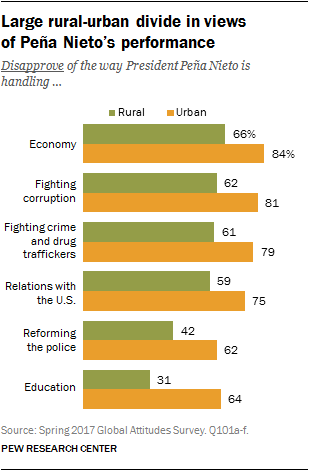 This urban-rural divide is especially prominent when it comes to the president’s performance on education: 64% of urban residents disapprove, compared with 31% of their rural counterparts.

Mexicans ages 18 to 29 are also more likely to have negative views of Peña Nieto’s policies than those 50 or older, particularly concerning education. Two-thirds of young Mexicans disapprove of the president’s handling of education, versus 44% of those ages 50 and older. 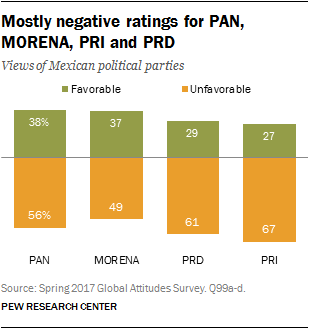 Views of Peña Nieto’s political party have worsened during his tenure. Roughly one-in-four (27%) have favorable views of the PRI now, compared with about half (49%) in 2013.

Institutions generally seen as having a positive impact in Mexico 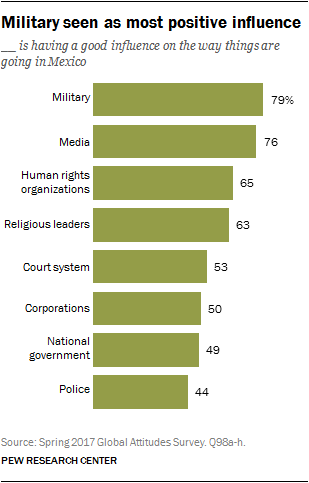 A strong majority of Mexicans (79%) see the military as having a positive influence on the country, making it the best-regarded institution tested. The media are a close second, with 76%. Almost two-thirds believe that human rights organizations (65%) have a good influence on how things are going in Mexico, and 63% say the same thing about religious leaders.

The court system, corporations and the national government receive mixed views, with around half of Mexicans seeing their influence as good. The police are at the bottom of the list, at 44% positive.

The military is seen more positively by men (84%) than women (75%), and somewhat more positively among Mexicans living in rural areas (86%) than those in urban areas (78%).

Nearly half of Mexicans ages 18 to 29 (48%) see the influence of the police positively, while about one-third of those 50 or older share this view (34%). Similarly, younger Mexicans (64%) more than their older counterparts (40%) tend to believe the court system has a positive influence.