Mexico’s perception of its northern neighbor has shifted dramatically in the past two years. Currently, roughly two-thirds (65%) of Mexicans view the U.S. unfavorably and 30% view the U.S favorably, an all-time low for the country since Pew Research Center began measuring U.S. favorability in 2002. This represents a complete reversal in Mexicans’ views: In 2015, 66% were favorable toward the U.S. and 29% were unfavorable. The 36-percentage-point drop in favorability is the largest across 37 countries surveyed by the Center. And the intensity of Mexicans’ distaste for America has grown: The share that holds a very unfavorable opinion of the U.S. has increased since 2015, from 6% to 42%.

Although negative views of the U.S. are widespread throughout Mexican society, opinions differ among demographic groups. Men, Mexicans ages 18 to 29, those who report higher incomes and those with more education are more likely to have favorable opinions of the U.S. 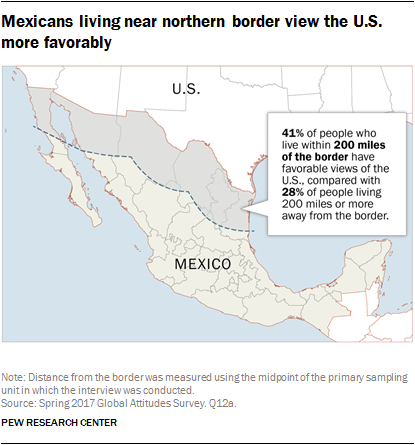 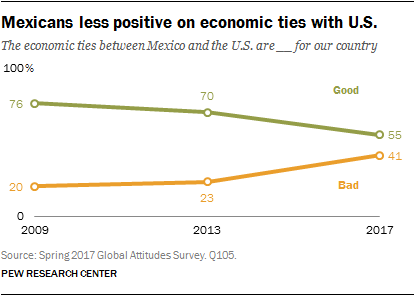 Mexicans’ declining affinity for the U.S. corresponds to their changing views of the Mexico-U.S. economic relationship, though most remain interested in continuing to work together economically. A majority of Mexicans (55%) still view their economic relationship with the U.S. as good for the country, but that reflects a decline of 15 points since 2013 and 21 points since 2009.

Mexicans’ views of economic ties with the U.S. also mirror their views of the North American Free Trade Agreement (NAFTA): Three-in-five Mexicans (60%) see NAFTA as a good thing for their country. Again, those close to the U.S. border (70%) view NAFTA more positively than those more than 200 miles away (58%).

Mexicans less interested in moving to the U.S. without authorization 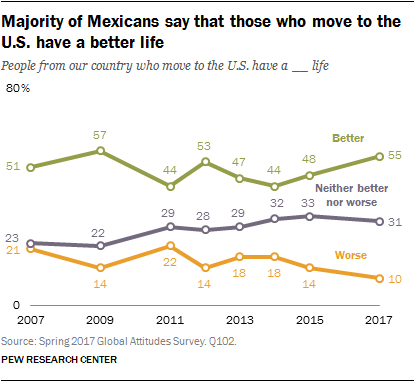 Despite their increasingly negative views of the U.S., Mexicans still believe life is better for those who move across the U.S. border. A majority (55%) say that Mexicans who move to America have a better life, up slightly since 2015 and similar to the peak in 2009.

The belief that moving to the U.S. results in a better life does not depend on views of the U.S.: More than half of those with an unfavorable opinion of the U.S. (54%) say that life is better for Mexicans who move there.

Similarly, the number of Mexicans interested in living in the United States has remained relatively stable for many years, despite the fact that between 2009 and 2014, more Mexicans left than came to the U.S. (For more, see More Mexicans Leaving Than Coming to the U.S.) A third of Mexicans surveyed (33%) would choose to live in the U.S. if they had the means and opportunity. Since this question was first asked in 2009, this measure has not wavered by more than 5 points (the high was 38% in 2011 and 2012). 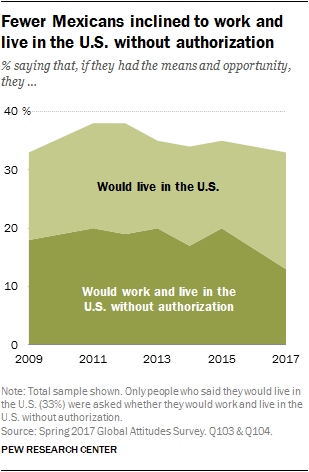 In contrast, the share of Mexicans who say they would work and live in the U.S. without authorization has decreased from 20% two years ago to 13% now. At the start of his presidential campaign in June 2015, Trump announced his plans to build a wall on the U.S.-Mexico border, and he has continued to push for stricter immigration policies since then.

Next: 2. Mexicans are downbeat about their country’s direction
← Prev Page
Page1You are reading page2Page3Page4Page5Page6
Next Page →

Crime and Drug Cartels Top Concerns in Mexico
Most Mexicans See Better Life in U.S. - One-In-Three Would Migrate
U.S. Image Rebounds in Mexico
Trump’s International Ratings Remain Low, Especially Among Key Allies
How Mexicans See America
Defining generations: Where Millennials end and Generation Z begins
How the Coronavirus Outbreak Has – and Hasn’t – Changed the Way Americans Work
What We Know About Gen Z So Far
Broad agreement in U.S. – even among partisans – on which news outlets are part of the ‘mainstream media’
Quiz: Are you a Core Conservative? A Solid Liberal? Or somewhere in between?