America continues to receive dismal ratings in Pakistan. In fact, the percentage of Pakistanis with a positive view of the United States is lower today than it was throughout much of the George W. Bush administration. President Obama gets low marks, and few believe U.S.-Pakistani relations have improved during his tenure.

U.S. drone strikes, a key element of Obama’s anti-terrorism efforts, are unpopular. Meanwhile, Pakistanis are eager to see the American campaign against extremist groups in neighboring Afghanistan come to an end – 66% believe it is good that most American troops will be gone in 2014.

Overall, only 11% of Pakistanis express a positive opinion of the U.S., essentially unchanged from last year’s 12%. For more than a decade, the U.S. has received largely negative ratings in Pakistan, although as recently as 2006 more than one-quarter of Pakistanis offered a positive review.

Currently, a 64% majority of Pakistanis consider the U.S. an enemy. However, this actually represents a slight decline from 74% in 2012. Just 8% of Pakistanis think of the U.S. as a partner.

President Obama receives very low ratings in Pakistan – just one-in-ten say they have confidence in him to do the right thing in world affairs. Still, the percentage who lack confidence in the American leader has declined – about half (52%) now hold this view, down from 60% last year and 68% in a 2011 poll conducted shortly after Osama bin Laden was killed in Pakistan by American special forces. 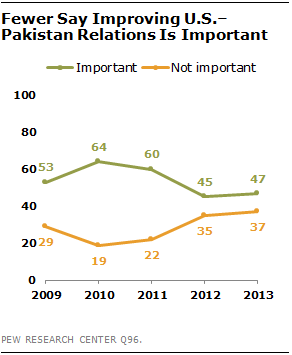 Assessments of the U.S.-Pakistan relationship have grown more negative over the last few years. Only 13% of Pakistanis believe relations between the two countries have improved; in 2006, about half (49%) held this view. Today, 54% say things are getting worse between the two nations.

Over the last several years, Pakistanis have also grown less likely to consider improving relations with the U.S. a priority. Nearly half (47%) still say improving the relationship is important, but this is down from 64% in 2010.

One challenge for the U.S.-Pakistan relationship is that many Pakistanis believe American policies unfairly favor their rival India. Roughly half of those surveyed (49%) express this view, while 10% say U.S. policies in South Asia are fair, and just 4% think they favor Pakistan. 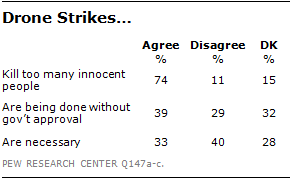 When asked whether they approve of U.S. drone strikes to target extremists in Pakistan, as well as in countries such as Yemen and Somalia, only 5% of respondents say they approve. More than two-thirds (68%) disapprove.

Views are somewhat more mixed, however, for the idea of the U.S. conducting drone strikes in conjunction with the Pakistani government: 21% endorse this, 38% oppose it and 41% offer no opinion. Similarly, there is division over whether the drone attacks are necessary to defend Pakistan from extremist groups – a third agree with this position, while 40% disagree. And opinions are divided regarding whether the strikes are being conducted with (29%) or without (39%) the approval of the Pakistani government. However, there is broad agreement about the consequences of drone strikes, roughly three-in-four Pakistanis (74%) say they kill too many innocent people.

Pakistanis do approve of some U.S. assistance in the battle against extremists. More than half (53%) would like to see the U.S. provide financial and humanitarian aid to areas where extremist organizations are active; just 12% oppose this idea.

More than four-in-ten (44%) want the U.S. to provide intelligence and logistical support to Pakistani troops fighting extremists, up slightly from 37% a year ago. Again, only 12% are opposed.

Meanwhile, fears about the Taliban and extremism may be on the rise in Pakistan, but that does not mean that Pakistanis want American forces to continue their fight against the Taliban and extremist groups in neighboring Afghanistan. About two-in-three Pakistanis (66%) say it is a good thing that the U.S. plans to remove most of its troops from Afghanistan in 2014. Only 6% believe this is a bad thing for Pakistan. 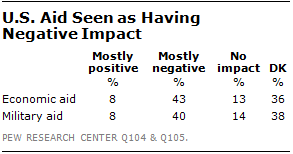