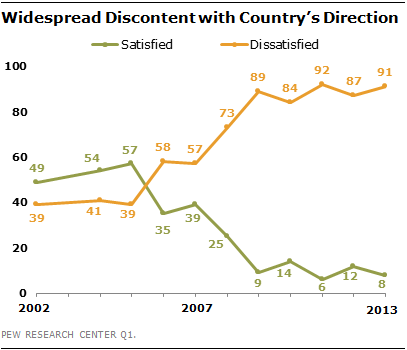 Remarkably large majorities believe Pakistan is on the wrong path and that its economy is in poor shape. Worries about crime and terrorism are almost universal, and concerns about political corruption, the situation in Kashmir, environmental challenges and poor education are also widespread.

President Asif Ali Zardari and the national government receive extremely negative ratings. Both Nawaz Sharif and Imran Kahn, the leaders of the two main opposition parties in the May 11 elections, are considerably more popular. 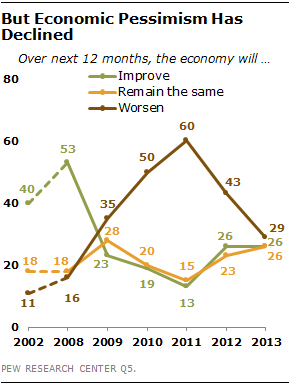 The military is widely seen as a positive influence on the nation. Religious leaders, the media and the court system also receive high marks. But, as has been true for the past few years, a large swath of the public says the police have a negative impact on the country.

Opinions about Pakistan’s economy are also overwhelmingly negative. Roughly eight-in-ten describe economic conditions as bad, although this is actually a slight improvement from last year, when 89% said the economy was in poor shape. 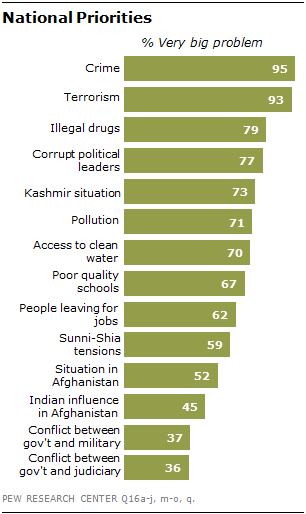 And there has been some improvement over the past two years in how Pakistanis see their country’s economic future. Today, they are almost evenly divided between those who think the economy will worsen over the next 12 months (29%), those who believe it will improve (26%), and people who believe it will remain the same (26%). In 2011 a 60% majority believed the economic situation would grow worse.

When Pakistanis are asked about the top problems facing their country, crime and terrorism top the list, with more than nine-in-ten rating them as very big problems.

Nawaz Sharif, head of the Pakistan Muslim League-Nawaz party (PML-N), is the most popular leader included on the survey, with a favorable rating from 66% of Pakistanis; roughly a quarter (26%) view him unfavorably. Sharif is particularly well liked in Punjab province (78%).

Imran Khan, leader of the Pakistan Tehreek-e-Insaf party (PTI), is also popular – 60% are positive toward the former cricket star and fewer than two-in-ten (17%) hold a negative opinion of him. Nonetheless, Khan’s ratings have declined from their high point in 2012 and 2011, when roughly seven-in-ten Pakistanis were favorable toward him. While Khan’s popularity has decreased across the board, the drop has been especially steep among 18- to 29-year-olds, his strongest supporters in 2012 (63% favorable in 2013 vs. 76% in 2012). 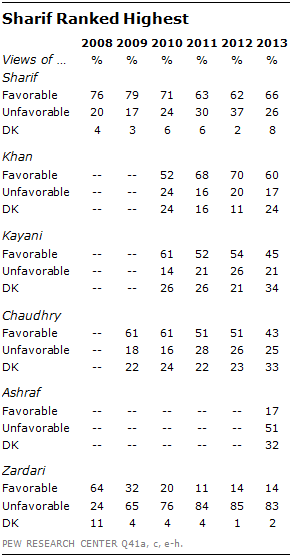 President Zardari continues to be very unpopular. Few Pakistanis (14%) express favorable views of their leader, while more than eight-in-ten (83%) are unfavorable. Even among supporters of his political party, the Pakistan Peoples Party, or PPP, Zardari struggles to gain an advantage over Sharif. Just 53% of those who identify with the PPP are favorable toward Zardari, compared with 52% who give Sharif high marks.

Raja Pervez Ashraf, who stepped down as prime minister when the government finished its term in March 2013, also receives negative ratings. About half of Pakistanis (51%) give Ashraf a negative rating. Just 17% are favorable, and nearly a third (32%) express no opinion.

Meanwhile, ratings for General Ashfaq Parvez Kayani and Chief Justice Iftikhar Muhammad Chaudhry have been declining steadily over the past few years. In 2010, a majority of Pakistanis (61%) were favorable toward Kayani, the Army chief of staff; today, fewer than half (45%) give him a positive review. Similarly, about six-in-ten (61%) had a positive view of Chaudhry in 2009 and 2010, while just 43% say the same now.

Among the institutions and leaders on the survey, the Pakistani military receives the highest marks. Roughly eight-in-ten (79%) rate the military’s impact on Pakistan as good; just 16% say it has a bad influence. 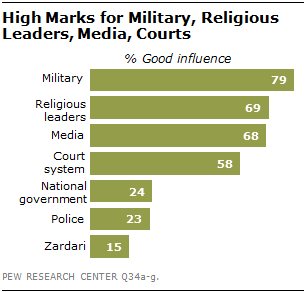 Nearly seven-in-ten Pakistanis also give high marks to religious leaders (69%) and the media (68%) for their influence on the country. A smaller majority (58%) says the same about the court system.

Consistent with Zardari’s negative personal image, few Pakistanis think he has a good impact on the country (15%). Roughly eight-in-ten (83%) say he has a bad influence.

Next: Chapter 2. The Fight Against Extremists
← Prev Page
Page1You are reading page2Page3Page4Page5
Next Page →