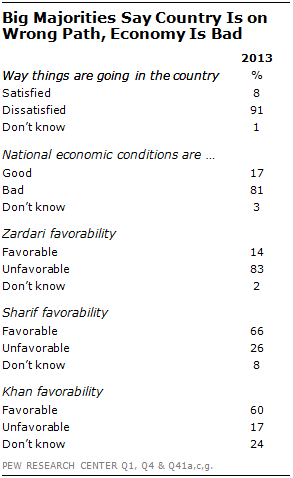 As Pakistan prepares for national elections, the country’s public mood is exceedingly grim. Roughly nine-in-ten Pakistanis believe the country is on the wrong track, and about eight-in-ten say the economy is in poor shape.

Meanwhile, concerns about extremist groups have increased markedly. More than nine-in-ten Pakistanis describe terrorism as a very big problem, and about half now say the Taliban is a very serious threat to their country. For the first time since the Pew Research Center began polling on these issues, the Taliban is essentially considered as big a threat to Pakistan as longtime rival India.

While worries about the Taliban are growing, there is almost no desire to see the United States extend its fight against the Taliban in neighboring Afghanistan. Two-in-three Pakistanis say it is a good thing that the U.S. plans to remove most of its troops from Afghanistan by 2014. At the same time, Washington’s use of drones to target extremists in Pakistan is widely unpopular.

Overall, America’s image remains extremely negative in Pakistan: Only 11% give the U.S. a favorable rating, and a similarly low number (10%) express confidence in President Barack Obama. Today, most Pakistanis (64%) see the U.S. as more of an enemy than partner, and the percentage of Pakistanis who think having better relations with the U.S. is important has declined in recent years. Meanwhile, fewer than one-in-ten Pakistanis say U.S. economic assistance is having a beneficial effect on their country.

Unsurprisingly, given the state of public opinion, incumbent President Asif Ali Zardari receives negative reviews: 83% express an unfavorable opinion of him. In contrast, two-thirds have a positive view of opposition leader, and former prime minister, Nawaz Sharif. Six-in-ten also have a positive opinion about former cricket star turned politician Imran Khan, although Khan’s ratings are down slightly from last year, when 70% rated him favorably.

These are among the major findings from a survey of Pakistan by the Pew Research Center. Face-to-face interviews were conducted with 1,201 respondents from March 11 to March 31, 2013. The sample covers approximately 82% of the country’s adult population.1 The survey also finds continuing support for the Pakistani military, which for decades has been an important player in the country’s politics. Roughly eight-in-ten (79%) think the military is having a positive influence on the nation.

Pakistanis Feel as Threatened by the Taliban as by India 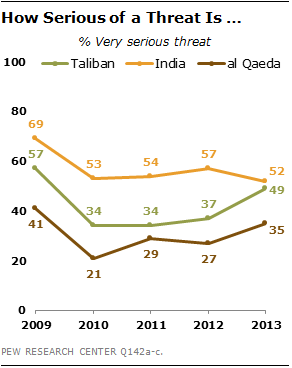 As has been the case in recent years, extremist groups remain largely unpopular in Pakistan. Just 13% express a positive view of al Qaeda, and 11% say this about the Taliban. Lashkar-e-Taiba, a radical organization active in Kashmir, gets somewhat higher ratings – 24% have a positive opinion of this group, which has been widely blamed in the 2008 Mumbai terrorist attacks.

The level of concern about the Taliban matches the level of worry about neighboring India, with whom Pakistan has fought several major wars since the two countries emerged as independent nations more than six decades ago. Roughly half (52%) consider India a very serious threat. 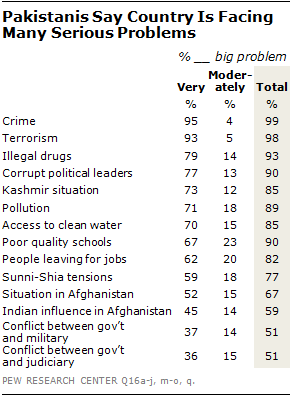 Pakistanis are concerned about a variety of national problems – especially crime and terrorism. Fully 95% describe crime as a very big problem, and 93% say the same about terrorism.

Illegal drugs, political corruption, the situation in Kashmir, pollution, access to clean water, and poor quality schools are considered very big problems by at least two-thirds of those polled. 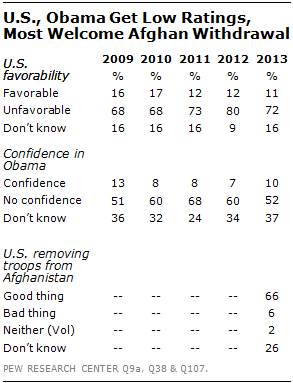 Negative sentiments about the U.S. remain pervasive in Pakistan. About seven-in-ten (72%) rate America unfavorably. Although negative views of President Obama are somewhat less common than they were two years ago after the killing of Osama bin Laden in Pakistan by U.S. forces, 52% still lack confidence in the American leader.

Only 13% think U.S.-Pakistan relations have improved in recent years. About half (47%) say it is important for the relationship to improve, although this is less of a priority for Pakistanis today than it was a few years ago.

Most Pakistanis welcome the U.S. drawdown from Afghanistan. Two-thirds say it is a good thing that most American troops will be gone in 2014.

American drone attacks against extremist leaders are largely unpopular. Roughly two-in-three Pakistanis (68%) oppose U.S. drone strikes. Opinions are divided on whether the strikes are being conducted with (29%) or without (39%) the approval of the Pakistani government. Similarly, there is division over whether drone attacks may be necessary to defend Pakistan from extremist groups – a third agree with this position, while 40% disagree. When asked about the consequences of drone strikes in general, roughly three-in-four (74%) say they kill too many innocent people.

Next: Chapter 1. National Conditions, Leaders and Institutions
← Prev Page
You are reading page1Page2Page3Page4Page5
Next Page →

On Eve of Elections, a Dismal Public Mood in Pakistan
OverviewPakistanis Feel as Threatened by the Taliban as by IndiaCrime, Terrorism Are Top ProblemsU.S. Still Poorly RegardedAlso of Note:
Chapter 1. National Conditions, Leaders and Institutions Chapter 2. The Fight Against Extremists Chapter 3. Attitudes toward the United States and American Policies Survey Methods