There is little support for extremist organizations in Pakistan. As has been true in recent years, relatively few people express a favorable opinion about the Taliban (11%) or al Qaeda (13%). Roughly four-in-ten Pakistanis offer no opinion about the latter.

However, these groups get somewhat higher ratings among supporters of the leading opposition party – 23% of those who identify with the Pakistan Muslim League-Nawaz party, or PML-N, view the Taliban and al Qaeda positively.

When asked more specifically about the Afghan Taliban and the Tehrik-i-Taliban (also known as the Pakistan Taliban, or TTP), Pakistanis also give these groups low ratings.

Opinions are more mixed regarding Lashkar-e-Taiba, an extremist group blamed in the 2008 Mumbai attacks and other terrorist incidents. About one-quarter (24%) express a favorable view of this organization, 36% rate it negatively and 40% do not give an opinion. Respondents who identify with the PML-N (40% favorable) and those living in Punjab province (34%) are more likely than others to give Lashkar-e-Taiba a positive rating.

Few Pakistanis have a positive view of the Haqqani network, although a solid majority (65%) do not have an opinion about this group, which is associated with the Taliban and is active on both sides of the Pakistan-Afghanistan border. 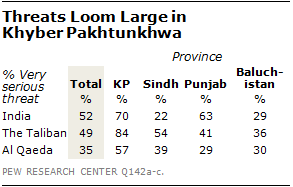 When asked to choose which is the greatest threat to their country – India, the Taliban or al Qaeda – respondents are divided between India (38%) and the Taliban (33%). Only 4% name al Qaeda. Views have shifted significantly since last year, when 59% chose India and 23% said the Taliban. 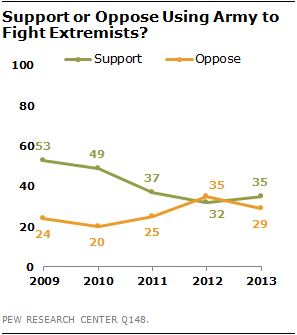 Another indicator of how concerned the country has become about extremism is that 36% of Pakistanis are very worried that extremist groups will take over the country. This is up from 26% last year, although still lower than the 45% registered in 2009, when the battle with the Taliban was raging in the Swat Valley.

Pakistanis are somewhat divided over whether to use the military to fight extremist groups. Roughly a third (35%) are in favor of using the Pakistani army to fight extremists in the Federally Administered Tribal Areas (FATA) and Khyber Pakhtunkhwa, while 29% oppose this policy. Views today are very different from 2009, when 53% backed using the military in this way. Still, the percentage who say they oppose this idea has dropped slightly since last year.

Next: Chapter 3. Attitudes toward the United States and American Policies
← Prev Page
Page1Page2You are reading page3Page4Page5
Next Page →

On Eve of Elections, a Dismal Public Mood in Pakistan Chapter 1. National Conditions, Leaders and Institutions
Chapter 2. The Fight Against Extremists
The Extremist Threat
Chapter 3. Attitudes toward the United States and American Policies Survey Methods