Overall, the Chinese public holds mixed or negative views of other major countries and international institutions such as the United States, United Nations and European Union. And while a plurality of Chinese describe their country’s relationship with India and the U.S., two of its major trading partners, as one of cooperation, that view has become less common in recent years. Meanwhile, China sees its relationship with Japan as one of hostility.

Globally, perceptions of Chinese power have increased in recent years, and in nine of the 21 nations surveyed, majorities or pluralities now believe that China is the world’s leading economic power. The Chinese, however, still tend to see the U.S. as the global economic powerhouse. 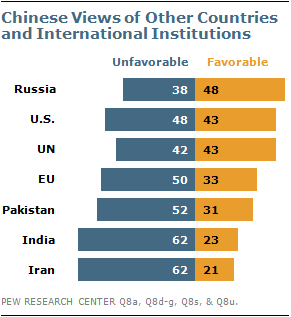 Chinese attitudes toward Russia are on balance positive, with 48% expressing a positive and 38% a negative view. In contrast, perceptions of the U.S. and the United Nations are roughly divided, with 43% holding a favorable opinion of each. And only about a third see the European Union (33%) and Pakistan (31%) positively. Chinese perceptions of these foreign nations and institutions have mostly held steady since last year.

The Chinese express even dimmer views toward their neighbor to the south, India. Roughly a quarter (23%) have a favorable opinion of India, while 62% offer a negative opinion.

Similarly, Iran receives largely negative ratings, with only 21% expressing a favorable view of the Islamic Republic, a decline of eight percentage points since 2011. 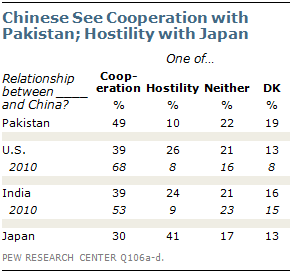 Similarly, 39% in China view their relationship with India as one of cooperation, down significantly since 2010, when 53% saw the relationship positively.

Views toward China’s longtime regional rival, Japan, are even dimmer, with a 41%-plurality saying that relations between China and Japan are hostile, and only three-in-ten describing them as cooperative.

China’s relationship with Pakistan is much brighter, with nearly half of Chinese (49%) seeing the relationship as one of cooperation and only 10% describing it as one of hostility. 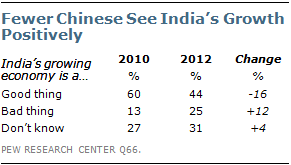 There is further evidence that Sino-Indian relations have cooled in recent years – increasingly, the Chinese public is wary of India’s economic growth. Currently, only 44% of Chinese say that their southern neighbor’s expanding economy is positive for China, down from six-in-ten in 2010. Meanwhile, those saying India’s growing economy is a bad thing has almost doubled over the same period.

Indian views towards China are even more negative. Only 23% of Indians describe their country’s relationship with China as one of cooperation and only 24% think China’s growing economy is a good thing for India. (For more on Indian views toward China and other nations see “Deepening Economic Doubts in India,” released on September 10, 2012).

Views of the U.S. and American Soft Power

The Chinese have lukewarm feelings toward the United States, President Obama, and the state of the relationship between the two powers. Only around four-in ten (43%) have a favorable view of the U.S, 38% express confidence in Obama to do the right thing regarding world affairs and just 39% see the relationship between the countries as one of cooperation. These ratings are all down sharply since 2010. (For more on Chinese and global attitudes toward the U.S., see “Global Opinion of Obama Slips, International Policies Faulted,” released June 13, 2012). 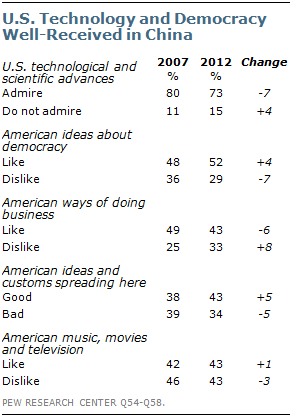 While overall ratings for the U.S. are mixed in China, certain aspects of America’s image are positive. Among the measures of American soft power tested, people in China most admire U.S. science and technology. Nearly three-in-four (73%) say they admire U.S. technological and scientific advances. However, this is down seven percentage points since 2007, when eight-in-ten Chinese said the same.

About half (52%) also favor American ideas about democracy and 43% like U.S.-style business, although views of the American business model have deteriorated somewhat since 2007. And while a 43%-plurality say it is a good thing that American customs and ideas are spreading to China, the Chinese are evenly divided on whether they like American music, movies, and television.

Across these various measures of U.S. soft power, there is one constant: richer, younger, more educated, and urban Chinese all express a more positive view of these aspects of America’s image. And this also holds true for overall ratings of the U.S. 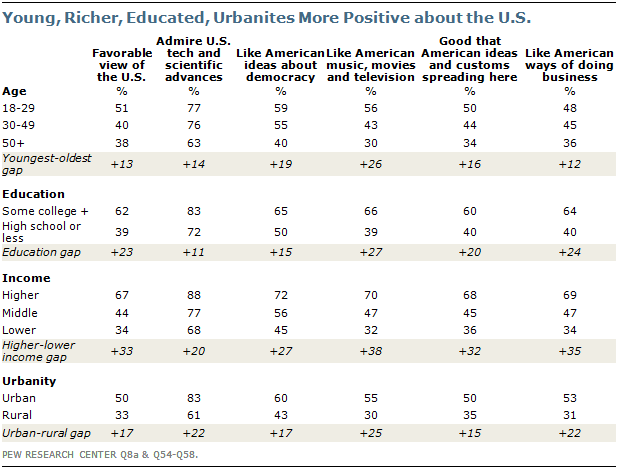 China’s Image in the World 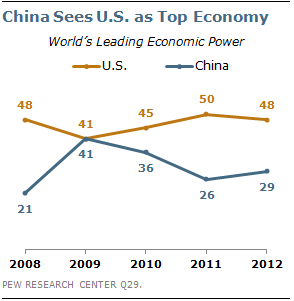 Perceptions of China’s economic power continue to grow in much of the world, especially in Europe. However, nearly half of Chinese (48%) say the U.S. is the world’s leading economic power, while just 29% name their own country as the global leader. These results are similar to 2008, when the question was first asked. However, in 2009, following the successful 2008 Beijing Summer Olympics and the financial crisis in the West, the Chinese were evenly divided, with 41% choosing both the U.S. and China as the world’s economic leader. Since then, perceptions have drifted back to pre-economic crisis levels.

In terms of overall image, in nine of 20 countries surveyed in 2012, majorities or pluralities give China positive ratings. Opinions are largely negative in six nations, while views are essentially divided in five countries.

China receives positive ratings in most of the predominantly Muslim nations surveyed and is well-liked by roughly six-in-ten Russians. Indian views are on balance negative, although fully 45% do not offer an opinion. Meanwhile, since 2011, China’s ratings are down in the U.S., Western Europe, and Japan. (For more, see “Global Opinion of Obama Slips, International Policies Faulted,” released June 13, 2012).