China’s image has grown more negative over the last year in the U.S., Japan and parts of Europe. However, China continues to receive relatively positive reviews in Russia and Brazil, as well as in several predominantly Muslim countries.

Across the 21 nations surveyed, the median percentage with a positive view of China (49%) is very similar to the median percentage with a favorable opinion of the U.S. (52%). But this hides significant regional differences in ratings for these two major powers. China is generally less popular than the U.S. in the European, Asian and Latin American countries surveyed. In contrast, respondents in predominantly Muslim nations and Russia give China higher marks than the U.S.

Another major power, Russia, is mostly unpopular all over the world, and the percentage of people with a favorable view of Russia has declined by at least 10 points over the last year in the U.S. and several European Union countries. Across 20 nations, a median of just 34% are favorable toward Russia, and Greece is the only country where a majority expresses a positive opinion.

Views toward the EU continue to be positive in most of the EU member nations surveyed, although ratings have slipped since 2011 in Spain, and the Brussels-based institution is not seen favorably in either the Czech Republic or Greece.

Overall, the Greeks stand out from their European neighbors in their views of countries and institutions. Unlike other EU countries, Greeks take a dim view of the UN, EU, NATO, and the U.S., but are favorable toward both China (56%) and Russia (61%). (For more comparisons between Greece and other EU publics, see “European Unity on the Rocks” released May 29, 2012). 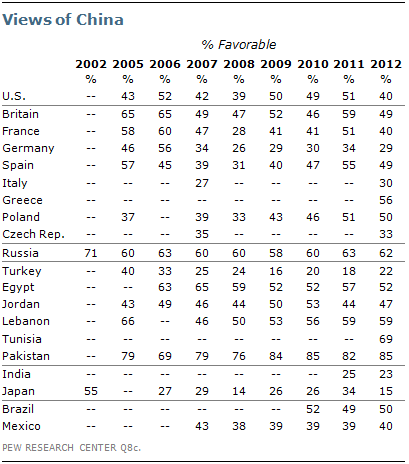 In nine of 20 countries, majorities or pluralities give China positive ratings. Opinions are largely negative in six nations, while views are essentially divided in five countries.

The biggest drop in ratings for China over the last year occurred in Japan, where the percentage of respondents with a positive view plummeted from 34% to 15%. China’s image has also declined in the U.S. – just 40% of Americans now express a positive opinion of China, compared with 51% in 2011.

Greece is the only EU country in which a clear majority rates China favorably. Reviews are particularly low in the Czech Republic, Italy and Germany. China’s popularity has dropped over the past year in Britain, France and Spain, after having increased between 2010 and 2011.

China receives positive ratings in most of the predominantly Muslim nations surveyed. Pakistanis (85%) are especially warm toward their neighbor while more than half in Tunisia, Lebanon and Egypt feel the same. Jordanians are almost evenly divided. The only majority Muslim country that gives China largely negative reviews is Turkey, where 59% express an unfavorable view.

China is well-liked by roughly six-in-ten Russians. Half of Brazilians also express a favorable opinion. Indian views are on balance negative, although fully 45% do not offer an opinion.

Russia is mostly unpopular across the nations surveyed. Only one country, Greece, has a majority that expresses a favorable view of Russia. Outside of Greece, there is no EU country included in the survey in which even four-in-ten express a positive view of Russia, and ratings have declined by double-digits over the last year in France, Germany, Britain and Spain.

The Lebanese and Tunisians are evenly split, but in other predominantly Muslim nations, ratings for Russia are decidedly lower.

Opinion about Russia is positive on balance in China, where 48% have a favorable and 38% an unfavorable opinion. In India, 30% express a positive view, but roughly half do not have an opinion.

Only 37% of Americans have a favorable view of Russia, down from 49% in 2011. Meanwhile, ratings are especially low in Mexico and Japan. 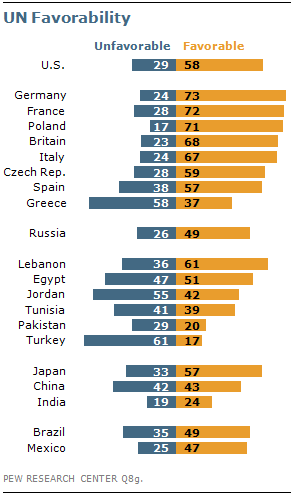 The UN is generally well-regarded, receiving high marks from majorities or pluralities in 13 of 21 countries. Europeans are especially favorable. About six-in-ten or more give the multilateral organization positive ratings across the countries surveyed in Europe. The Greeks are the exception, with a majority (58%) unfavorable.

Russians are, on balance, favorable toward the UN. Outside of Europe, the UN is well-liked by pluralities or more of Americans, Japanese, Brazilians and Mexicans. In the U.S., a large partisan gap emerges on this institution, with Democrats (70%) significantly more likely to be favorable than either independents (53%) or Republicans (48%).

The Chinese public is equally divided on the UN. In India, 24% express a positive view, while 58% have no opinion.

Attitudes toward the UN vary across predominantly Muslim countries. Egyptians and Tunisians are evenly divided. The Pakistanis are unfavorable, on balance, but about half have no opinion. Meanwhile, the UN receives its lowest rating in Turkey, where just 17% rate the organization positively, while 61% give it a negative assessment.

Lebanon is the only majority Muslim nation where most rate the UN favorably; however, opinion diverges considerably among the three major religious groups in the country. Sunni Muslims (78%) and Christians (66%) are much more positive than Shia Muslims (36%).

Attitudes toward the EU continue to be mostly positive in the EU member nations. Majorities in Poland, Germany, France and Italy regard the institution favorably. Most Spanish agree, although ratings for the EU have dropped steeply over the last year. The British are mixed in their attitudes, while fewer than four-in-ten Greeks or Czechs offer a positive rating.

Other countries that share a positive view of the EU are Japan, Russia, Tunisia and Lebanon. Half of Americans are favorable, though a substantial number (29%) have no opinion.

Elsewhere, the EU is not as warmly reviewed. Less than four-in-ten Mexicans express positive opinions, though many (35%) do not express an opinion about the organization at all. Brazilian opinion is closely divided.

Relatively few in China (33%) hold a positive opinion of the EU. The same is true in Egypt, Jordan and Pakistan. The EU continues to be very unpopular in Turkey – just 21% of Turks have a favorable opinion of the organization, down from 58% in 2004, before negotiations over Turkey’s application for EU membership became mired in delays.

NATO Ratings Mostly Favorable – But Not in Greece, Turkey 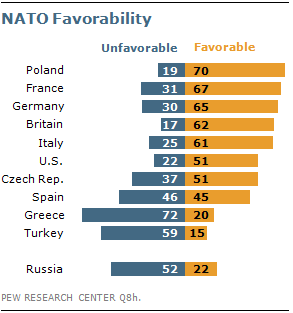 Majorities or pluralities in most of the NATO member countries surveyed give the organization positive reviews. Broad majorities in Poland, France, Germany, Britain and Italy are favorable toward the military alliance. And about half in the Czech Republic and the U.S. say the same.

Greece and Turkey are the only member states surveyed that do not have a positive opinion of NATO. Russia, a non-member state, also views the alliance negatively, with about half unfavorable.

Since last year, ratings of NATO have changed very little, with the exception of Spain (-17 percentage points) and Russia (-15), where favorability has dropped considerably.