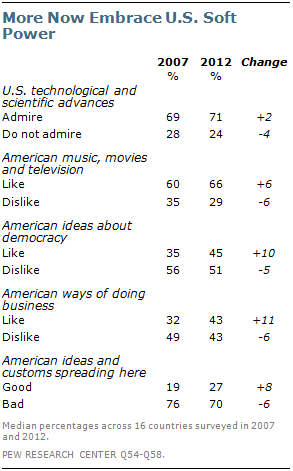 In countries across the globe, people continue to embrace American popular culture and to admire the U.S. for its science and technology. Attitudes toward American ideas about democracy and ways of doing business are more mixed, but global publics are more positive toward both than in the final years of the Bush administration. This is especially true in Europe, but views have improved in other regions as well.

For instance, looking at the 16 countries surveyed in both 2007 and 2012, the median percentage saying they like American ways of doing business has increased by 11 percentage points, while the percentage who dislike the U.S. approach has declined by six points.

The median percentage who say it is a good thing that American ideas and customs are spreading to their country has also increased over the last five years, but it remains the minority viewpoint. Instead, even in countries where U.S. soft power has a strong appeal, there are serious concerns about “Americanization.” Among the countries surveyed in both 2007 and 2012, a median of 70% say it is bad that U.S. culture is spreading to their country.

American soft power consistently proves especially appealing among young people. In particular, U.S. music, movies, and television resonate well among those under age 30, and in several countries the same is true for American ideas about democracy. 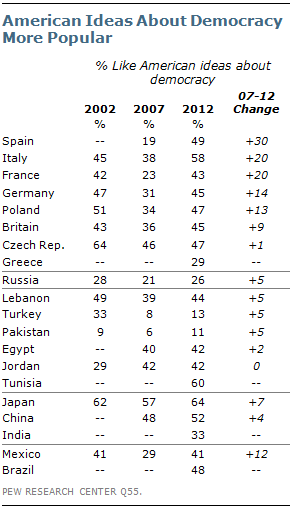 U.S. style democracy receives mixed reviews around the globe. Italy is the only European country in which a majority (58%) says they like American ideas about democracy. However, views in Europe have become much more positive on this question since it was last asked in 2007 – a time when ratings for the U.S. were generally low across the region.

In Russia, which experienced a surge in pro-democracy demonstrations following last December’s parliamentary elections, only 26% like U.S. ideas about democracy, little changed from 21% in 2007.

Overall, American style democracy receives negative reviews in the predominantly Muslim nations surveyed. However, in Tunisia, the country that launched the Arab Spring, six-in-ten say they like these ideas. And significant minorities offer a favorable response in Lebanon (44%), Egypt (42%) and Jordan (42%).

The Japanese (64%) are especially likely to endorse American ideas regarding democracy. Meanwhile, 52% of Chinese also hold this view, while just 29% say they dislike these ideas. Brazilians are divided on this question (48% like, 45% dislike). Only about four-in-ten Mexicans (41%) like these ideas, but this is up from just 29% five years ago. 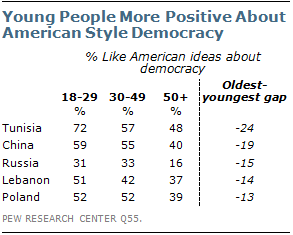 In several countries, young people are more likely to embrace American conceptions of democracy, including Tunisia, where 72% of 18-29 year-olds hold this view, compared with 48% of those age 50 and older. Roughly six-in-ten Chinese (59%) under 30 back American style democracy, compared with four-in-ten of those 50 and older. Notable age gaps also exist in Russia, Lebanon, and Poland.

For their part, Americans believe the U.S. should be working to strengthen democracy in other countries – 63% say the U.S. should promote democracy around the world, while just 29% believe it should not. Independents (57%) are somewhat less likely to hold this view than either Democrats (71%) or Republicans (69%). 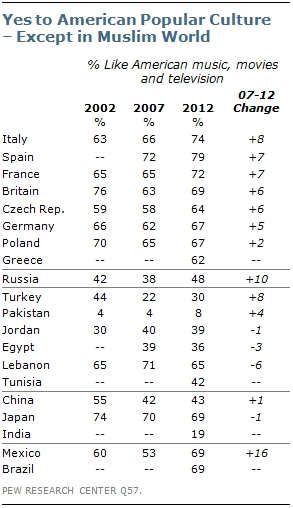 Popular culture continues to be a strong suit of America’s global image, and views of American music, movies and television have improved in many countries since 2007.

Ratings for U.S. popular culture have generally increased in Europe, and solid majorities across the European Union nations in the survey say they like American music, movies and television, including more than seven-in-ten in Spain (79%), Italy (74%) and France (72%).

Meanwhile, 69% in Japan and Brazil say they like these U.S. cultural exports. The same percentage now embrace American popular culture in Mexico, up from 53% in 2007. It is also more popular today among Russians than it was five years ago (48% now, 38% in 2007).

The Chinese remain divided on this question (43% like, 43% dislike), while Indians on balance say they do not care for American music, movies and television (19% like, 47% dislike).

U.S. popular culture also gets generally poor reviews in most of the majority Muslim nations surveyed, especially Pakistan, where 78% dislike it. Still, three-in-ten or more say they enjoy American music, movies and television in Jordan (39%), Egypt (36%) and Turkey (30%). And in Tunisia, opinions are fairly divided: 42% like U.S. pop culture, while 49% do not. Moreover, it is largely popular in Lebanon, where 65% like it, including 81% of Christians, 60% of Sunnis, and 48% of Shia. 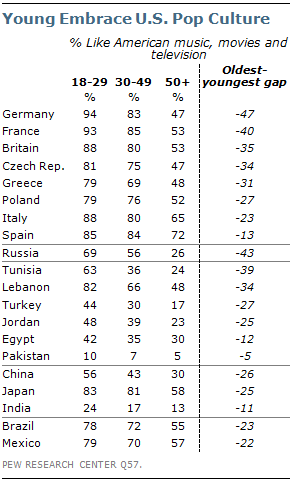 Attitudes toward American popular culture vary dramatically by age around the world. In 19 of 20 countries, there is a double-digit difference on this question between those under age 30 and those 50 and older.

For instance, in Germany a remarkable 94% of 18-29 year-olds like U.S. music, movies, and television, compared with 47% of people age 50 and older. Age gaps nearly as large are also found in Russia and France.

Moreover, in several countries where overall ratings for the U.S. are poor or at best mixed, most young people embrace American cultural exports. For example, majorities of 18-29 year-olds in Greece (79%), Tunisia (63%) and China (56%) like this aspect of America’s image.

The exception to the global pattern is Pakistan – a country where the U.S. consistently receives low ratings among young and old alike. Just 10% of Pakistanis under age 30 express a positive view of American pop culture. 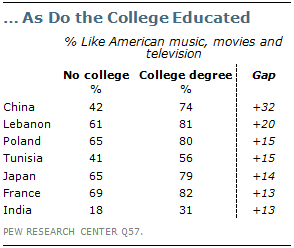 In addition to an age gap, in several countries there is a significant education gap, with college educated respondents offering a more positive assessment of American music, movies and television. The gap is especially large in China, where 74% of those with a college education like U.S. pop culture, compared with 42% of those with less education.

When Americans are asked whether they like foreign music, movies and television, 53% say they do, while 39% respond that they do not. Americans have warmed a bit toward foreign popular culture over the last five years – in 2007, they were almost evenly split, with 45% saying they like it and 44% saying they dislike it. There is a strong partisan divide on this question – most Democrats (59%) and independents (56%) like music, movies and television from other countries, but only 41% of Republicans agree. 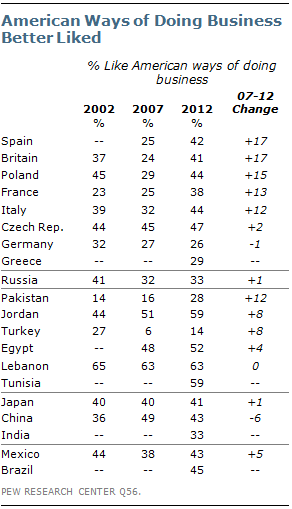 The American approach to business is admired in Arab nations where some other aspects of America’s image are seen in a negative light. Indeed, the four Arab countries surveyed are the only countries in which half or more say they like American ways of doing business – 63% hold this view in Lebanon, 59% in both Jordan and Tunisia, and 52% in Egypt.

In the two non-Arab majority Muslim nations, U.S. style business is less well-regarded. Only 28% of Pakistanis and 14% of Turks say they like American ways of conducting business. Still, views in both countries have become more positive since 2007.

American business gets some of its poorest marks in Europe, although ratings are up by double-digits in five of the EU nations surveyed. Views of U.S. business are particularly negative among German (only 26% like), Greek (29%) and French (38%) respondents. At 47%, the Czech Republic offers the most positive opinions about American business in the EU. However, young people express a more positive attitude in several EU nations, including Britain, Italy, the Czech Republic, Poland and France.

In Japan, attitudes toward the U.S. approach to business are on balance negative. But a 43%-plurality of Chinese approve of the American approach, including 66% of those with a college education.

Views are divided on this question in both Latin American nations included in the survey, Brazil (45% like, 45% dislike) and Mexico (43% like, 47% dislike). 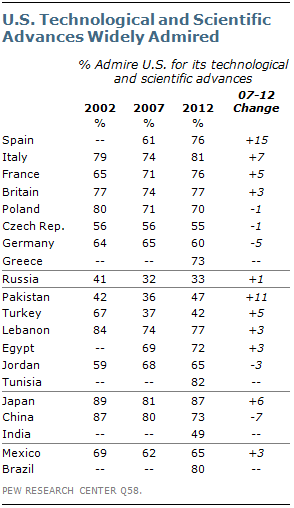 Overall, there has been relatively little change on this question over the last five years, since American scientific and technological achievements were also well-regarded in 2007.

Majorities in all of the EU countries polled admire the U.S. for these achievements, although significant minorities disagree in the Czech Republic (41%) and Germany (38%).

This aspect of America’s image is very popular in the four Arab nations surveyed: Tunisia (82% admire), Lebanon (77%), Egypt (72%) and Jordan (65%). Ratings are also generally positive in the Asian and Latin American nations included.

The two outliers on this question are Russia and Turkey. Russians have consistently voiced lukewarm attitudes about U.S. science and technology since the Pew Global Attitudes Project first asked this question in 2002. Turks, on the other hand, were once admirers of the U.S. in this regard. In 2002, 67% said they admired American scientific and technological advances, but by 2007 this had plunged to 37%. Today, it stands at 42%.

Americans overwhelmingly express pride in their country’s science and technology – 86% say they are proud of U.S. achievements in this area. 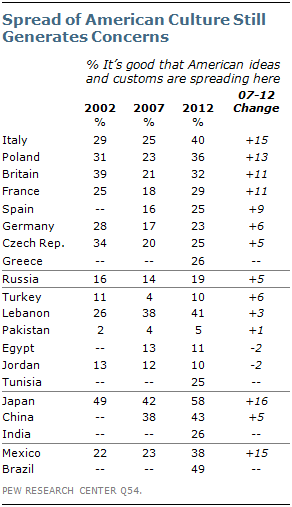 Even in many countries where various elements of America’s image are popular, there are concerns about the reach of U.S. influence. Japan is the only country in which a majority (58%) says it is a good thing that American customs and ideas are spreading to their country.

European attitudes toward the spread of American culture have grown somewhat more positive over the last five years, but there is still considerable opposition to Americanization. At 40%, Italians register the highest level of support for American ideas and customs among the EU nations surveyed.

Few embrace the spread of American culture in the predominantly Muslim nations surveyed, although many Lebanese (41%) do want American ideas and customs. Views differ considerably, however, among the country’s religious communities – 72% of Lebanese Christians say the spread of these ideas is a good thing; only 23% of Sunni and 13% of Shia Muslims agree.

A 43%-plurality in China endorse the spread of U.S. ideas and customs. Six-in-ten Chinese with a college education believe it is a good thing that these ideas are coming to China.

Attitudes toward American cultural influence are also relatively positive in Brazil, where 49% express a positive view and 47% a negative one. Mexicans, however, tend to have a negative opinion about ideas and customs from their neighbor to the north. 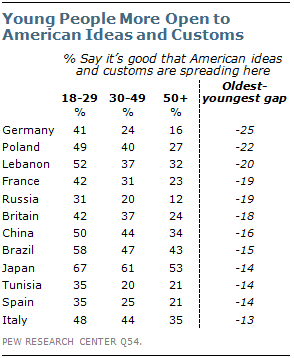 In most countries, young people are more likely than their older counterparts to say it is good that American ideas and customs are spreading. There is a gap of at least 20 percentage points between 18-29 year-olds and those 50 and older in Germany, Poland and Lebanon, and gaps of at least 10 points in nine other countries.

Americans like to see their own culture disseminated across the globe – three-in-four say it is good that American ideas and customs are spreading to other countries.