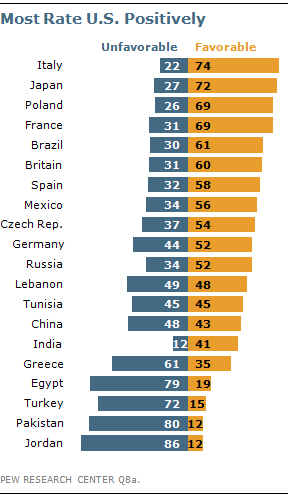 Overall ratings for the U.S. remain largely positive in 12 of 20 countries, including large majorities in a number of European nations, as well as Japan and Brazil. In contrast, ratings are decidedly negative in four of the six predominantly Muslim countries polled. The U.S. also receives poor marks in crisis-ridden Greece.

In most nations, young people express a more positive view of America, and in several countries the U.S. is more popular among those with a college education.

Key aspects of American foreign policy continue to be unpopular among many around the globe. Most believe the U.S. still acts unilaterally in world affairs. And while most Europeans support American anti-terrorism efforts, they are widely opposed in Muslim nations. Moreover, U.S. drone strikes – a key element of the Obama administration’s anti-terrorism policy – are widely unpopular nearly everywhere, although the U.S. itself is a clear exception.

Assessments of American economic power have declined over the last year, and views about U.S. economic strength have shifted dramatically over the last four years, especially in Western Europe, where China is now seen as the world’s economic leader. For example, in 2008, before the global economic downturn, 42% in Spain described the U.S. as the world’s leading economic power; just 24% said China. Today, only 26% name the U.S., while 57% think China occupies the top spot. 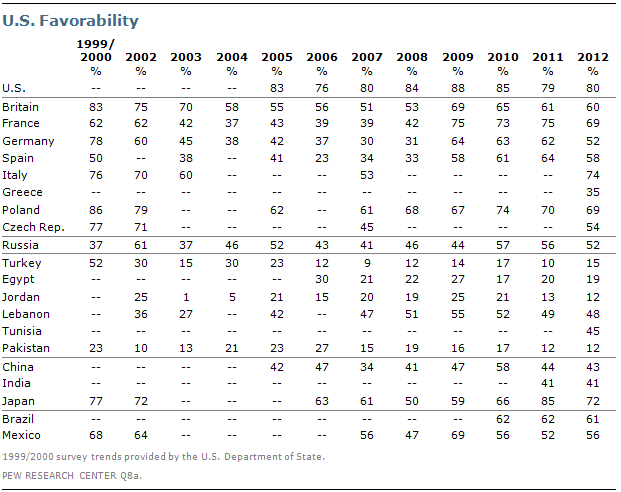 German attitudes toward the U.S., while still generally positive, have cooled over the last year, with favorable ratings dropping from 62% to 52%. Smaller declines have taken place in France (-6 percentage points) and Spain (-6). Greece is the only European country polled in which the U.S. gets negative marks – only 35% of Greeks express a favorable opinion of the U.S., while 61% offer an unfavorable one.

The U.S. receives many of its lowest ratings in predominantly Muslim nations. Fewer than one-in-five have a positive opinion about America in Egypt (19%), Turkey (15%), Pakistan (12%) and Jordan (12%). Views are divided, however, in Tunisia (45% favorable, 45% unfavorable) and Lebanon (48% favorable, 49% unfavorable).

Lebanese views differ considerably among the country’s major religious groups. Solid majorities of Sunni Muslims (67%) and Christians (61%) give the U.S. a favorable grade, compared with just 7% of Shia Muslims.

Last year, driven at least in part by American relief efforts following the March 2011 earthquake and tsunami, a remarkable 85% of Japanese gave the U.S. a favorable rating. Today, 72% hold this view – a significant drop, but still higher than the 66% registered in 2010.

Elsewhere in Asia, the Chinese are roughly split in their views about the U.S. (43% favorable, 48% unfavorable). On balance, Indians see the U.S. favorably (41% favorable, 12% unfavorable), although nearly half (47%) offer no opinion.

About half of Russians (52%) express a positive view of the U.S., as do majorities in the two Latin American countries surveyed, Brazil (61%) and Mexico (56%). 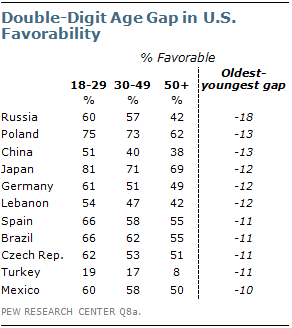 In most of the countries surveyed, younger people tend to have more positive attitudes toward the U.S. This is particularly true in Russia, where 60% of 18-29 year-olds express a favorable opinion, compared with just 42% of those age 50 and older.

Three-in-four 18-29 year-old Poles give the U.S. a positive rating, compared with 62% of people 50 and older. Similarly, in China there is a 13 percentage point gap between 18-29 year-olds (51% favorable) and those 50 and older (38% favorable). Double-digit age gaps also appear in Japan, Germany, Lebanon, Spain, Brazil, the Czech Republic, Turkey and Mexico.

In several nations, the college educated also express more positive attitudes toward the U.S. For instance, 66% of Chinese with a college degree have a favorable opinion of the U.S., while just 41% of those without a college degree hold this view. There are also significant education gaps in Lebanon, Jordan, India, and the Czech Republic.

Opinion of the American People 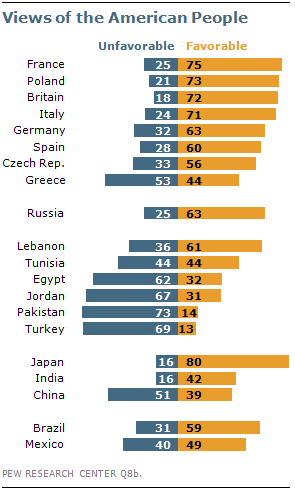 The American people continue to receive largely positive ratings in most of the nations polled. Majorities or pluralities in 13 of 20 countries express a favorable view of Americans, including majorities in seven of the eight European Union members surveyed. Greece again is the exception: just 44% of Greeks have a positive opinion of Americans, while 53% hold a negative opinion.

Most Lebanese (61%) see the American people in a favorable light, while opinion in Tunisia is evenly split (44% favorable, 44% unfavorable). In the other majority Muslim nations surveyed however, views are decidedly negative.

Ratings are also, on balance, negative in China, where 51% give the American people unfavorable marks and just 39% see them favorably. 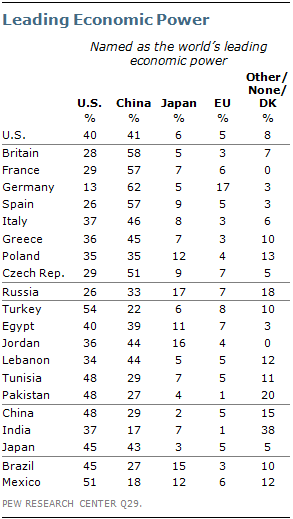 Over the last few years, perceptions about the global economic balance of power have been shifting, with growing numbers naming China, rather than the U.S., as the world’s leading economy. In this year’s poll, nine publics place China in the top spot, while seven see the U.S. as the economic leader. In five countries, views are essentially mixed.

This trend has been especially strong in Europe. Majorities or pluralities in seven of the eight EU nations surveyed consider China the global economic leader. In just the last year, the percentage naming the U.S. has declined by 13 percentage points in France, 11 points in Spain, and nine in Germany.

Turkey and Mexico are the only countries in which more than half consider the U.S. the world’s leading economic power, but in both nations the percentage naming the U.S. has declined 14 points since last year.

Americans are almost evenly divided on this question: 40% think their own country is still the economic leader, while a similar percentage (41%) name China. The Chinese, on the other hand, are not convinced that their country is the world’s leader: roughly half (48%) place the U.S. in the top position, compared with just 29% who say China.

Germany is the only country in which the percentage identifying the financially troubled EU as the leading economic power reaches double digits. While 17% of Germans name the EU, this is down significantly from the 36% registered in 2009.

Across much of the globe, people continue to believe the U.S. acts unilaterally in world affairs. However, three of the four BRIC countries – an acronym applied to these nations because of their emerging economies –are exceptions to this pattern. More than half in Brazil (55%) and China (51%) say the U.S. does take into account their interests when it is making foreign policy decisions. On balance, Indians also hold this view, although the percentage saying the U.S. considers India’s interests has declined from 57% last year to 44% today. In Russia, the fourth BRIC country, only 22% think the U.S. acts multilaterally.

Throughout Europe and the Middle East, majorities say the U.S. does not take into account the interests of countries like theirs.

Opinions on this issue have shifted in Germany since last year, when 56% said the U.S. considered the interests of nations like Germany a great deal or a fair amount. Now, just 43% hold that view.

A significant change has also taken place in Japan. In 2011, following the American aid provided to Japan after the earthquake and tsunami, 51% said the U.S. considered the interests of nations like Japan – a 20-point increase from 2010. Today, 36% express this view.

Americans see this issue differently: roughly three-in-four (77%) believe their country does take into account the interests of other nations when it is making decisions about foreign policy. 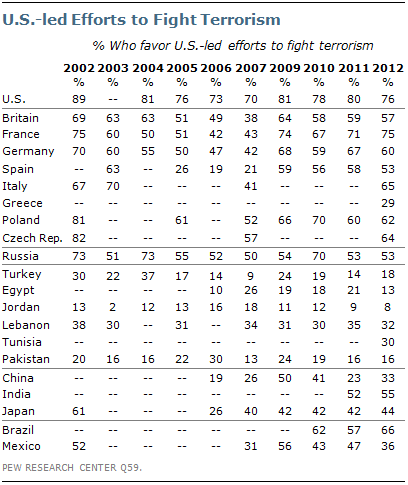 Among Europeans, support for American anti-terrorism policy was low during the final years of the George W. Bush administration, but rebounded following President Obama’s election. And, outside of Greece, support of the American approach remains relatively high today in Europe.

In contrast, predominantly Muslim publics have consistently expressed negative opinions about U.S. anti-terrorism efforts throughout both the Bush and Obama eras, and that remains the case in the current poll.

As has consistently been the case over time, a broad majority of Americans (76%) support the country’s anti-terrorism efforts, including 86% of Republicans, 77% of independents, and 72% of Democrats. 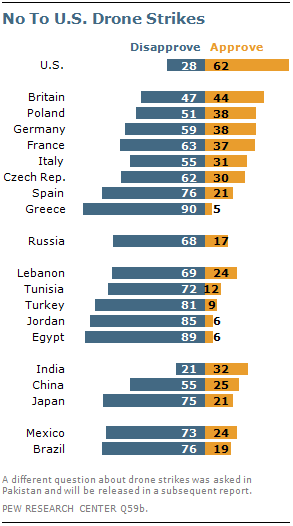 In the vast majority of nations polled, there is considerable opposition to the U.S. drone campaign against extremist leaders and organizations. In 17 of 20 countries, more than half disapprove of the U.S. conducting drone missile strikes to target extremists in places such as Pakistan, Yemen and Somalia. The policy is unpopular in majority Muslim nations, but also in Europe and other regions as well.

The three outliers on this issue are India, Britain, and the U.S. itself. Indians who have an opinion tend to support American drone strikes (32% approve, 21% disapprove), but nearly half (47%) do not offer a view on this question. Meanwhile, the British are almost evenly divided (44% approve, 47% disapprove). 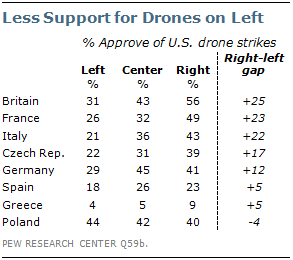 Across much of the EU, there is a significant ideological gap on this question. For example, a majority (56%) of those who describe themselves as being on the political right in Britain favor U.S. drone strikes against extremists, but just 31% on the left agree.

A similar gap emerges in France, where about half of those on the right (49%) approve of the drone attacks, compared with about one-quarter (26%) among people on the left. Double-digit differences are also found in Italy, the Czech Republic and Germany. 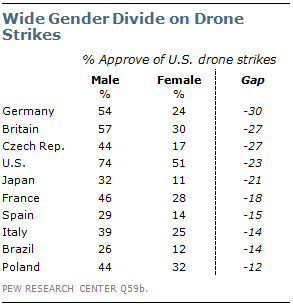 There are even larger differences between men and women on this question throughout much of Europe, as well as in the U.S., Japan, and Brazil. In Germany, 54% of men support the strikes, compared with just 24% of women. Fully 57% of British men approve of using drones, but only 30% of women agree. Double-digit gender gaps are found in 10 nations, including a gap of 23 percentage points in the U.S. 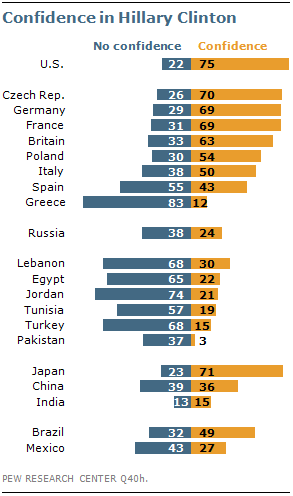 U.S. Secretary of State Hillary Clinton receives mixed reviews. Throughout most of Europe, she gets positive marks, especially in the Czech Republic, France, and Germany, where about seven-in-ten express confidence that she will do the right thing in world affairs. Ratings are mostly negative, however, in Spain and Greece.

Clinton receives poor marks throughout the predominantly Muslim nations polled. In Asia, roughly seven-in-ten Japanese (71%) express confidence in her, but the Chinese are divided (36% confidence, 39% no confidence). Meanwhile, the vast majority of Indians do not have an opinion about America’s chief diplomat.

Three-in-four Americans believe Clinton will do the right thing in world affairs, including nearly all (92%) Democrats surveyed. However, strong majorities of both independents (70%) and Republicans (62%) also hold this view.

Next: Chapter 2. Attitudes Toward American Culture and Ideas
← Prev Page
Page1You are reading page2Page3Page4Page5Page6Page7
Next Page →