Publics in most nations surveyed continue to express more confidence in President Barack Obama than in other key international leaders. Indeed, Obama is more popular in Europe than German Chancellor Angela Merkel, even as the German leader receives mostly positive ratings in France and Britain, as well as in her home country. Reviews of Merkel are much more mixed, however, in economically struggling Southern Europe – in particular, Greeks overwhelmingly say they lack confidence in her leadership. 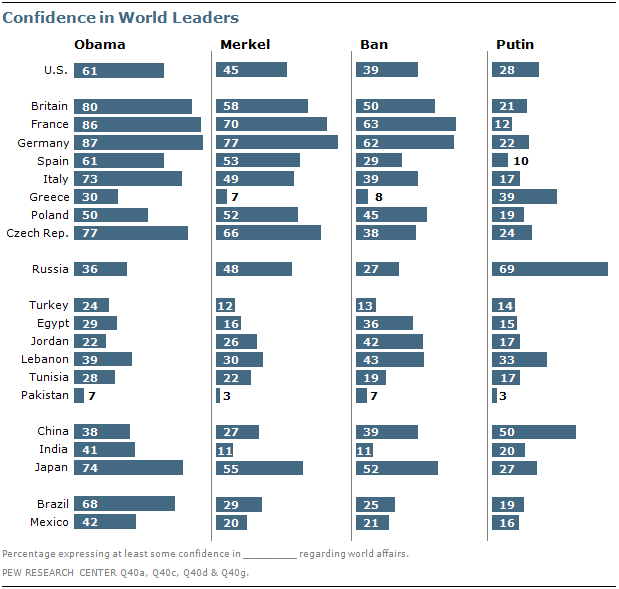 Russian President Vladimir Putin, who was recently elected to his third term, is considerably less popular than Obama and Merkel. Majorities in most countries lack confidence in the Russian leader, and his ratings have slipped significantly over the last few years in Western Europe.

Meanwhile, UN Secretary-General Ban Ki-moon is largely unknown in many nations, although he does receive somewhat better ratings in the Middle East than the other leaders included on the survey.

Confidence in Merkel is highest in her home country, where 77% express at least some confidence, up eight points since 2011.

Support for Merkel remains high in France, where seven-in-ten voice confidence in the German leader. However, this represents a ten percentage point drop since 2011. The chancellor is also relatively popular in the Czech Republic, where roughly two-thirds express at least some confidence in her ability to handle international affairs.

In Britain, around six-in-ten have a positive opinion of Merkel, but this is down six points from 2011. Merkel’s ratings have fallen most sharply in Spain, where 53% express confidence in the chancellor, down 16 points since last year.

Opinions of Merkel are more divided in Italy, where 49% have confidence in her and 45% do not. Meanwhile, she is incredibly unpopular in Greece, where around nine-in-ten (93%) have a negative opinion of her.

Outside of Europe, Merkel maintains her strongest support in Japan, where a 55%-majority backs the chancellor. Roughly half (48%) of Russians express confidence in her.

Negative views of Chancellor Merkel are prevalent in the Middle East, with solid majorities in Turkey, Egypt, Jordan, and Lebanon lacking confidence in the German leader.

More than four-in-ten Chinese (44%) lack confidence in Merkel, while just 27% rate her positively. Majorities in India and Pakistan have no opinion of her. She is also not well-known in Mexico, where 43% have no opinion.

Majorities or pluralities in 16 of 21 nations have not too much or no confidence in Russian President Vladimir Putin to do the right thing in world affairs. Only in Russia does a 69%-majority voice support for the newly re-elected president, although this is down from 75% in 2011 and 84% in 2007.

China is the only other country where Putin is on balance popular – half of the Chinese surveyed express a lot or some confidence in the Russian leader.

Less than a quarter in Germany, Britain, Italy and France have confidence in Putin. His ratings in these countries have declined since 2007, when he was wrapping up his second term as president, including double-digit decreases in Britain (-16 percentage points) and Germany (-10). In the U.S., 54% lack confidence in the Russian president.

Putin is unpopular in predominantly Muslim nations, with solid majorities of Egyptians (75%), Jordanians (72%), Turks (70%), and Lebanese (63%), as well as about half of Tunisians (51%), saying they do not have confidence in him. 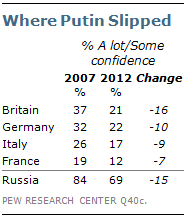 The Japanese continue to have a low opinion of Putin – around two-thirds in Japan (68%) have not too much or no confidence in the Russian president. Most Indians do not offer an opinion.

Opinions of UN Secretary-General Ban Ki-moon are mixed, and he is not well known in many of the nations surveyed. Confidence in Ban is highest in France and Germany, but he also receives plurality support in Japan, Britain and Poland.

In Greece, roughly three-quarters have little or no confidence in the UN Secretary-General’s handling of international affairs. Around six-in-ten in Spain agree.

Views of the Secretary-General are also negative in Turkey, Egypt, and Tunisia, while Jordanians are divided. As is often the case, opinions in Lebanon are sharply divided along sectarian lines. While 43% of all Lebanese have a lot or some confidence in Ban’s ability to handle international affairs, majorities of Sunnis (59%) and Christians (56%) have confidence in him. On the contrary, virtually no Shia Muslims in Lebanon (1%) have confidence in the Secretary-General, with 99% expressing no confidence. Ban’s negative ratings among Shia Muslims may be related in part to a UN tribunal investigating the assassination of former Lebanese Prime Minister Rafik Hariri that has indicted members of the militant Lebanese Shia group Hezbollah – also, Ban has recently called for Hezbollah to disarm.

Elsewhere, Ban is not well-known. Three-quarters in India have no opinion of him, as do 63% in Pakistan, 47% in Russia, and 41% in Mexico. 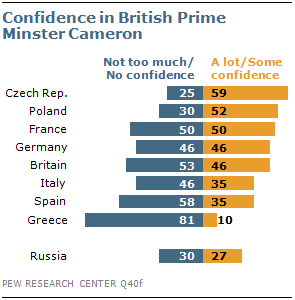 In other European nations, support for Cameron is on balance negative, with only 35% in Italy and Spain voicing confidence in him. As with other world leaders, Greeks rate the British PM negatively – just 10% have confidence in Cameron, while roughly eight-in-ten do not. Russians, for the most part, have no opinion (44%). 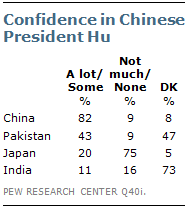 However, views of Hu are negative in regional rival Japan, where three-quarters lack confidence in the Chinese leader.

In Pakistan, those who have an opinion generally rate Hu positively. Roughly four-in-ten (43%) say they have confidence in the Chinese leader, while 47% have no opinion. In neighboring India, a large majority (73%) do not have an opinion of President Hu.