More Egyptians disapprove than approve of how President Obama has dealt with calls for political change across the Middle East this spring. Among those who disapprove, more fault the U.S. president for doing too little to back those protesting for change, rather than too much. 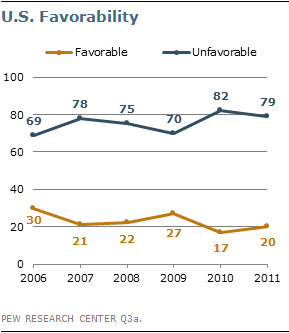 Washington’s stance on political change in Egypt and other Middle Eastern countries has done little to alter overall views of the U.S. Nearly eight-in-ten Egyptians have an unfavorable opinion of the U.S. – virtually unchanged from last year. Most continue to express negative views about President Obama, with more than six-in-ten saying they do not have confidence in him to do the right thing with regard to world affairs.

Public opinion is more mixed with regard to bilateral relations. Four-in-ten want the relationship with the U.S. to be as close as it has been in recent years, while an almost identical number want a more distant relationship. Only a small minority wants closer ties with the U.S.

Egyptian views on relations with Israel are starker: A majority says the 1979 peace treaty that made Egypt the first Arab country to officially recognize Israel should be annulled. Just over a third say the treaty should be maintained. 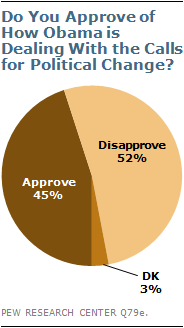 Washington’s response to political change in countries such as Egypt, Tunisia, Bahrain and Libya has not won over most Egyptians – 52% disapprove of how President Obama is dealing with calls for political change in the Middle East, compared with 45% who approve.

Poorer Egyptians are more critical of U.S. engagement. About seven-in-ten (69%) among those with lower incomes disapprove of how President Obama is handling developments in the Middle East, while nearly six-in-ten (58%) with higher incomes actually approve of the U.S. approach.

Views of the U.S. response are also more positive among younger and better-educated Egyptians. Among those under age 30, 51% positively assess Obama’s handling of calls for political change, compared with 41% among those age 30 or older. Similarly, 52% of Egyptians with a college education approve of the U.S. response, while 43% with secondary education or less share this view.

Among Egyptians who disapprove of the U.S. response to events in the Middle East, 42% believe the U.S. president has shown too little support for those protesting in the streets of Cairo and elsewhere; just 13% believe Washington has shown too much support. Over a third (36%) of those unhappy with the U.S. response do not see the U.S. president as offering either too little or too much backing to advocates of political change.

U.S. Impact on Situation in Egypt 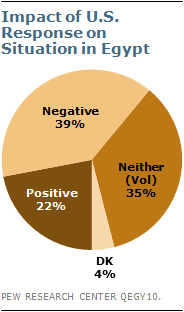 When it comes to their own country, few Egyptians applaud U.S. handling of recent events. Only 22% say the U.S. response to the political situation in Egypt has had a positive impact on the way things are now going. Many more – 39% – feel the U.S. has had a negative impact.

Even among younger Egyptians and those with higher incomes – groups that tend to be somewhat more favorable in their assessment of how Obama has handled the demands for change in the Middle East – fewer than three-in-ten think the U.S. has positively influenced the current situation in Egypt. Meanwhile, 50% of lower-income Egyptians say the U.S. response has had a negative effect.

Interestingly, 35% of Egyptians say the U.S. has had neither a positive nor negative impact on the current situation in the country. This suggests that for a sizable percentage of the population the U.S. has essentially been a non-factor in the political changes sweeping the country.

Even though Egyptians of all educational levels have unfavorable views of the U.S., those who are more highly educated are slightly less negative. For example, 68% of those with a college education have an unfavorable opinion of the U.S., compared with 85% with a primary or less education.

Unfavorable opinion of the U.S. is more pronounced among older Egyptians, as well. Among those age 50 and older 86% view the U.S. unfavorably, compared with 75% among those under 30.

Like general views of the U.S., Egyptian opinion of President Obama is decidedly negative. More than six-in-ten (64%) currently say they have not too much or no confidence in the U.S. leader to do the right thing regarding world affairs; just 35% have a lot or some confidence. A year ago, 59% lacked confidence, while 33% had confidence.

As is the case with President Obama’s handling of recent events in the Middle East, younger and better off Egyptians are slightly more positive in their assessment of the U.S. leader. Forty-four percent of those under age 30 have confidence in the U.S. president, compared with a third of Egyptians 50 and older. Likewise, four-in-ten (41%) higher-income Egyptians trust President Obama to do the right thing on the world stage, while only three-in-ten among lower-income Egyptians share that view. 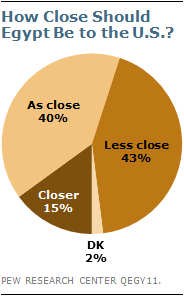 When asked about bilateral relations with the U.S., 43% of Egyptians say they would prefer their country to have a less close relationship with the U.S. Nearly the same number (40%) would like the relationship to remain as it has been in recent years. Only 15% voice interest in Egypt and the U.S. sharing a closer relationship in the years ahead.

Egyptians who are less well-off tend to be more supportive of distancing the bilateral relationship. Fifty-five percent of lower-income Egyptians support more distant relations, compared with just over a third (36%) of those with higher incomes. 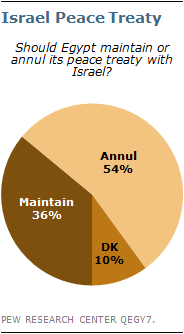 Egyptians appear prepared to overturn the three-decade-old peace agreement that has been a cornerstone of the country’s relationship with Israel. By a margin of 54% to 36%, Egyptians say their country should annul the treaty with Israel. One-in-ten offer no definite opinion.

Egyptian Muslims who sympathize with those who disagree with Islamic 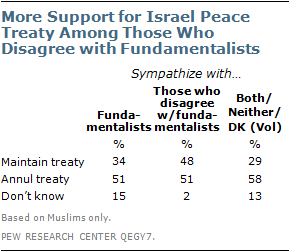