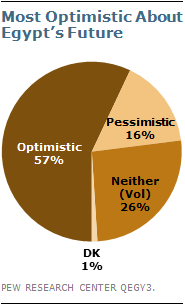 Egyptians are optimistic about the future of their country. More than twice as many say they are satisfied with the way things are going in Egypt as did so a year ago; and while ratings of economic conditions remain negative, most now say they expect the economy to improve over the next 12 months.

When asked about priorities for the future, large majorities rank key tenets of democracy – such as freedom of speech, honest elections, a fair judiciary, a civilian-controlled military, religious freedom and gender equality – as important, with the highest priority given to a fair judicial system and the freedom to openly criticize the government. Most Egyptians also say democracy is preferable to any other kind of government, but support for democracy coexists with a desire for stability and economic prosperity.

Majorities of Egyptians want elections to be held as soon as possible rather than waiting until political parties have time to organize; still, fewer than half are certain that the next election will be free and fair. And, at this point, no group emerges as a clear favorite to lead the next government – the New Wafd Party, the Muslim Brotherhood and the Al-Ghad Party receive similar levels of support. 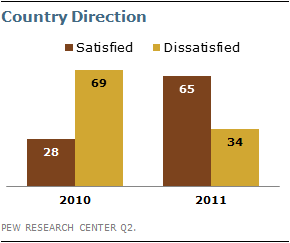 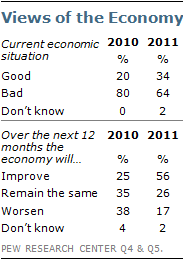 Egyptians also express optimism about their short-term economic future. While 64% say current economic conditions are bad, this is an improvement from a year ago, when eight-in-ten gave the economy a negative rating. Furthermore, a majority of Egyptians (56%) now say they expect the economy to improve over the next year; just a quarter expressed such optimism in 2010.

And while those with lower incomes are more likely to say they are optimistic about the future of the country more generally, those with high incomes are more likely than those in the low-income group to express optimism about Egypt’s short-term economic future; 62% of those with high incomes expect the economy to improve over the next year, compared with a slim majority (52%) of those in the lowest income group. 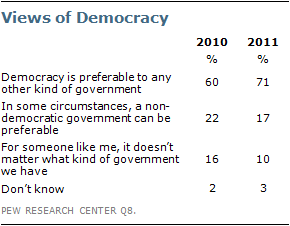 Egyptians are also more likely than they 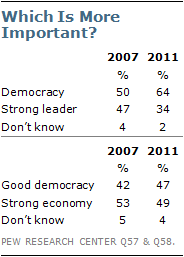 When asked to choose between a good democracy and 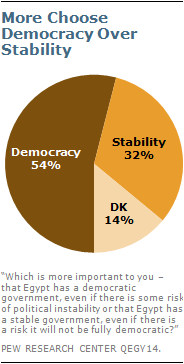 The view that a democratic government, rather than a strong leader, is the best approach for solving Egypt’s problems is also more widespread among those ages 50 and older. About three-quarters (74%) of older Egyptians prefer democracy over a leader with a strong hand, compared with about six-in-ten of those ages 30 to 49 (62%) and those younger than 30 (61%).

Economy and a Fair Judiciary Among Top Priorities 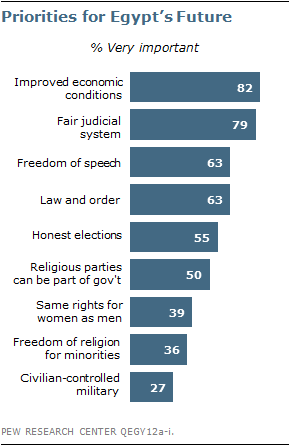 Thinking about Egypt’s future, about eight-in-ten (82%) say it is very important for economic conditions to improve; a similar percentage (79%) gives equal importance to a judicial system that treats everyone in the same way. More than six-in-ten also say it is very important that anyone can openly criticize the government and that law and order be maintained (63% each).

Other key features of democracy, while deemed at least somewhat important by an overwhelming majority of Egyptians, do not register as highly as a top priority. For example, a narrower 55% majority says it is very important for Egypt to have honest elections that are held regularly with a choice of at least two political parties; half say the same about allowing religious parties to be part of the government.

Gender equality, religious freedom and a civilian-controlled military are seen as top priorities by fewer than half of Egyptians. About four-in-ten (39%) say it is very important for women to have the same rights as men; 36% believe it is very important for Copts and other religious minorities to practice their faiths freely; and just 27% place high importance on Egypt having a military that is under the control of civilian leaders.

Not surprisingly, women are far more likely than men to value gender equality. Nearly half of Egyptian women (48%) say it is very important for women to have the same rights as men; just 30% of men say that is the case. Women also place higher priority on law and order; two-thirds rate it as very important, compared with 58% of men. 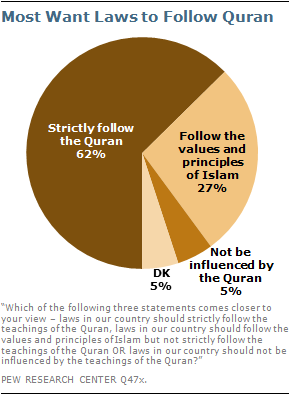 Support for laws that strictly follow the teachings of the Quran is far more widespread among those who sympathize with Islamic fundamentalists; 81% of Muslims in this group endorse such religion-based laws. Among Muslims who sympathize with those who disagree with Islamic fundamentalists, fewer than half (47%) say laws should strictly follow the teachings of the Quran, 35% say laws should follow the values and principles of Islam, and 12% believe laws should not be influenced by the Quran. 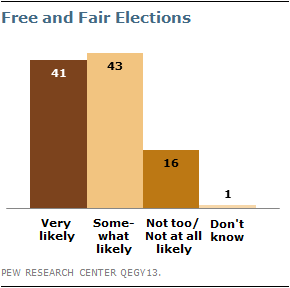 Nearly six-in-ten (62%) Egyptians think parliamentary and presidential elections should be held as soon as possible so that a new government can take office quickly; 36% would like elections to be delayed until political parties have enough time to organize. Older Egyptians are particularly inclined to say elections should occur as soon as possible; 71% of those ages 50 and older share this view, compared with about six-in-ten of those ages 30 to 49 (60%) and those younger than 30 (58%).

Yet, while Egyptians are eager for a new government to take office, many are uncertain that the next elections will be free and fair. About four-in-ten (41%) say this is very likely, while another 43% say it is only somewhat likely and 16% believe it is not too likely (8%) or not at all likely (8%) that the upcoming election will be free and fair with a choice of at least two parties.

Nor is there a consensus among Egyptians as to which group they would like to see lead the next government. One-in-five express support for the New Wafd Party, while 17% would like to see the Muslim Brotherhood lead the government and about the same percentage (16%) favor the Al-Ghad Party; about one-in-ten express support for the Tagammu Party (11%) or the National Democratic Party (10%). 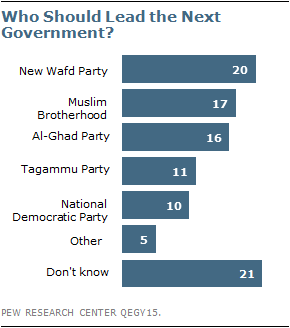 For the most part, support is split among different political players across demographic groups. Yet, the New Wafd Party emerges as a frontrunner among younger Egyptians; 25% of those younger than age 30 would like to see the New Wafd Party lead the next government, compared with 15% who support the Muslim Brotherhood and 14% who support the Al-Ghad Party, the second and third choices among younger respondents, respectively.

Those who express favorable opinions of the Muslim Brotherhood are not significantly more likely to support the group to lead the next government than they are to support other groups; similarly, the Al-Ghad Party is not the clear choice of those who have a favorable view of its founder, Ayman Nour. However, Hosni Mubarak’s National Democratic Party is the clear choice among the 13% who have a favorable opinion of the former president. About four-in-ten (42%) of those who have a positive view of Mubarak want his party to lead the next government; 23% favor the New Wafd Party, which receives the second-most support among those with positive opinions of Mubarak.

Next: Chapter 4. Relationship With the United States and Israel
← Prev Page
Page1Page2Page3You are reading page4Page5Page6
Next Page →