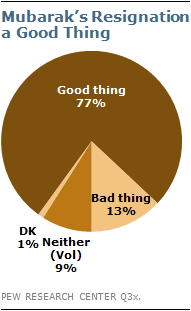 Nearly two months after President Hosni Mubarak stepped down as Egypt’s longtime ruler, few Egyptians lament the end of his 30-year reign. To the contrary, about three-quarters believe Mubarak’s resignation was a good thing. Nearly nine-in-ten, moreover, say they have an unfavorable view of the former president. Mubarak’s briefly serving vice president, Omar Suleiman, fares better in the court of public opinion, although only about a third of Egyptians have a favorable view of Suleiman.

Echoing the demands of street protesters for a more accountable government, Egyptians say both corruption and a lack of democracy have been top concerns in recent years. A smaller, but sizable number point to a lack of economic prosperity as the country’s most pressing issue, while more modest percentages name the risk of political instability or the banning of religious parties as leading concerns.

Mubarak’s ouster from office has been attributed in part to the ability of social media to mobilize citizens and broadcast news in real time. Although most Egyptians still do not use the internet, a majority of those online not only report visiting social networking sites, like Facebook, but also obtaining news about their country’s political situation from such sites.

A strong majority of Egyptians approve of Mubarak’s decision to concede to protesters’ demands and step down as president in February. About three-quarters (77%) say it was a good thing for Mubarak to resign; just 13% disagree.

The former president is decidedly unpopular among Egyptians. Nearly nine-in-ten (86%) say they have an unfavorable opinion of Mubarak, while only 13% view him favorably. Tellingly, even among the small percentage with a favorable opinion of Mubarak, about half (49%) say that it was a good thing that the longtime president resigned. Just a handful of Egyptians (6%) appear to remain enamored of the former president and regret the end of his regime.

Mubarak’s stock was not always so low. In 2007, when Pew Global Attitudes asked about the then-president’s impact on the way things were going in the country, 69% of Egyptians said Mubarak was having a good influence, compared with 27% who said he was having a bad influence.

Egyptians also have a negative view of Omar Suleiman, who briefly served as vice president prior to Mubarak’s resignation in February. Nearly two-thirds (66%) have an unfavorable opinion of Suleiman, while a third (34%) hold a favorable view. Together, attitudes toward Mubarak and Suleiman reinforce the impression that Egyptians are happy to say good-bye to the Mubarak era. 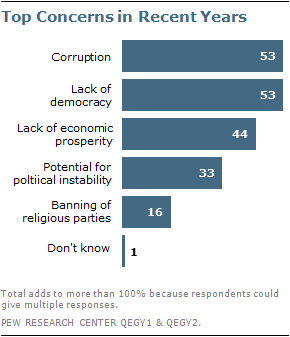 In line with protester demands for a more accountable government, majorities of Egyptians say they have been worried about both corruption and a lack of democracy in recent years (53% each). More than four-in-ten (44%) say a lack of economic prosperity has been among their top two concerns.

Worries about the economy are most pronounced among Egyptians who fall in the middle-income range, with 50% of this group naming the lack of prosperity a top concern, compared with 38% among low-income and 41% among high-income groups.

Smaller numbers of Egyptians point to the potential for political instability or the banning of religious parties as leading concerns in recent years. Concerns about instability have been particularly common among wealthier Egyptians. About four-in-ten (41%) of those with higher incomes place political instability among their top concerns, while about three-in-ten among those with middle (32%) or low (30%) incomes give it the same priority. 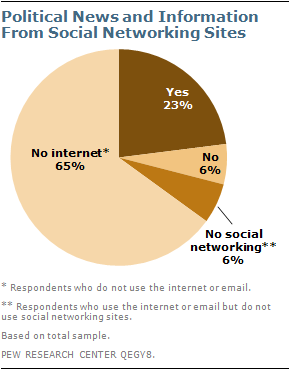 Nearly a quarter of Egyptians (23%) say they have used social networking sites such as Facebook, MySpace and Twitter to obtain news about their country’s political situation; 6% access these sites but have not used it as a source of political news. About two-thirds (65%) do not use the internet or email.

Rural dwellers are also more likely than those in urban areas to rely on social networking sites for political information. Nearly three-in-ten (28%) of those in rural areas do so, compared with 17% of urban dwellers.