Pakistanis give religious leaders high marks for the influence they are having on the way things are going in their country, and overwhelming majorities express support for giving religious judges and Muslim leaders the power to decide family and property disputes. The survey also finds broad support for severe laws, such as the death penalty for people who leave the Muslim religion, across all segments of the population.

Yet, despite expressing harsh views about crime and punishment, Pakistanis are much more progressive in opinions about the importance of educating girls. As Taliban militants continue their efforts to prevent girls from receiving an education by burning down and bombing girls’ schools, the public is now nearly unanimous in saying that both boys and girls should be educated.

The survey also finds that majorities of Pakistanis in all major ethnic groups think of themselves first as Pakistani rather than identifying primarily with their ethnicity. This is especially the case among the Punjabis, the Pashtuns, and the Muhajirs. Sindhis are more likely than other groups to say they identify first with their ethnic group.

High Regard for Religious Leaders

Nearly two-thirds (64%) in Pakistan say that religious leaders are having a good influence on the way things are going in their country; in 2007, 61% expressed this view while in 2002 just half said religious leaders were having a positive influence. Moreover, about seven-in-ten (71%) favor giving Muslim leaders and religious judges the power to decide family and property disputes. 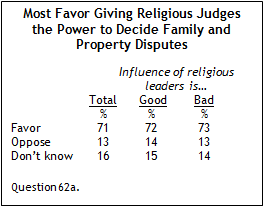 Women are somewhat more likely than men to say that religious leaders should have the power to decide family and property disputes, but solid majorities in both groups share that view. Nearly three-quarters of women (74%) favor giving religious judges and Muslim leaders this power, compared with 68% of men. 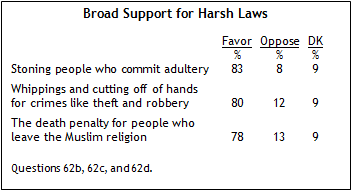 Pakistanis overwhelmingly favor stoning people who commit adultery (83%), and comparable percentages favor punishments like whippings and cutting off of hands for crimes like theft and robbery (80%), and the death penalty for people who leave the Muslim religion (78%). Support for strict punishments is equally widespread among men and women, old and young, and the educated and uneducated.

Even those who say they identify with the modernizers in a struggle between Islamic fundamentalists and those who want to modernize the country support these measures. About nine-in-ten (91%) Pakistanis who side with the modernizers favor stoning adulterers. A similar proportion of those who side with modernizers (89%) favor punishments like whippings and cutting off of hands for theft and robbery, and 86% favor the death penalty for people who leave Islam. These views are virtually identical to the views of those who identify with Islamic fundamentalists. 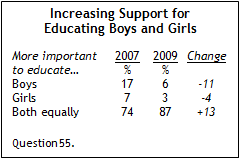 Most Say They Are Pakistanis First 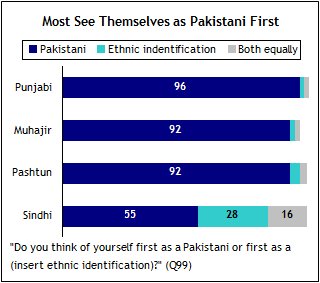 When asked whether they think of themselves primarily as Pakistani or as a member of their ethnic group, roughly nine-in-ten (89%) say they see themselves first as Pakistani.

Next: Chapter 3. Attitudes Toward the United States
← Prev Page
Page1Page2You are reading page3Page4Page5Page6Page7Page8Page9Page10
Next Page →