Personal contentment is not only common in Pakistan, but has changed little over the years. Currently, majorities express satisfaction with their overall life and specifically with certain aspects of their personal lives, including their family life, income and job. However, by global standards, levels of personal satisfaction in Pakistan are relatively low. And while many remain satisfied with much of their personal lives, fewer Pakistanis say their personal finances are in good shape this year compared with last year. 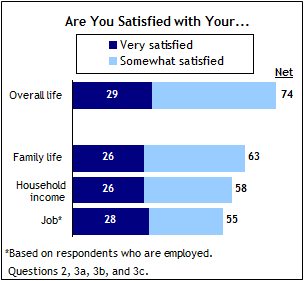 Roughly three-quarters (74%) of Pakistanis are satisfied with their overall life, and 29% say they are very satisfied. 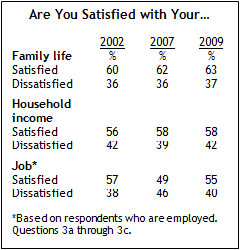 Trends in personal satisfaction have, for the most part, changed little over the years among Pakistanis. Currently, more than six-in-ten (63%) say they are satisfied with their family life, largely unchanged from past surveys (62% in 2007; 60% in 2002).

Satisfaction with household income has also remained steady over the last several years – about six-in-ten (58%) are satisfied with their household income, unchanged from 2007.

Job satisfaction among those who are employed has fluctuated slightly over the past few years. After a small drop from 57% in 2002 to 49% in 2007, job satisfaction has recovered in 2009; 55% currently report being satisfied with their jobs.

Wealth and Education Tied to Satisfaction 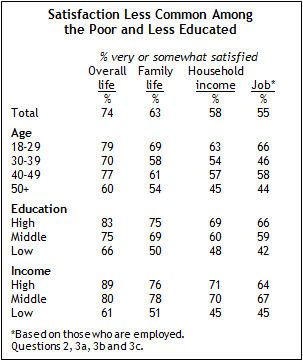 Life satisfaction is often higher among wealthier and more educated Pakistanis. For example, more than eight-in-ten (83%) of those with relatively high levels of education or more are satisfied with their lives overall, while 75% of those with at least some primary education and 66% of those with no formal education feel the same way. Along the same lines, high income earners in Pakistan (89%) are more likely to express overall life satisfaction than middle income (80%) or low income respondents (61%).

About seven-in-ten (69%) in the highest education category are happy with their income, compared with slightly fewer of those with at least some primary education (60%) and even fewer respondents with no formal education (48%). And not surprisingly, Pakistanis in the middle and high income brackets are much more likely to express satisfaction with their income than those in the lowest income bracket (71% in the high income group and 70% in the middle group vs. 45% in the low group).

For Pakistanis, education and income also play a role in personal satisfaction with family lives and jobs. Respondents with at least some formal education are more likely to express satisfaction with their family life and job than those who have no formal education. Similarly, those in the middle and high income groups are happier with their jobs and family life than those in the lower income group. 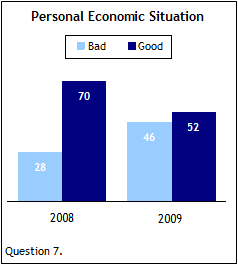 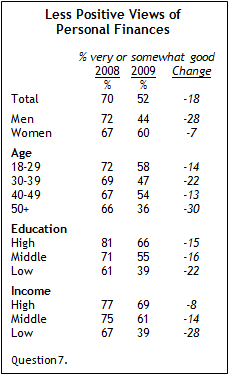 Similarly, among all age groups fewer say their personal economic situation is good this year than did so last year.

Respondents in the lowest education category are much less likely this year than last year to say their personal finances are good. Roughly six-in-ten (61%) of those with no formal education described their personal economic situation as good back in 2008, but this year only about four-in-ten (39%) share the same sentiment.