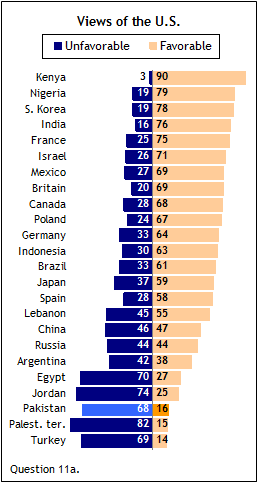 The image of the United States is overwhelmingly negative in Pakistan. At 16%, America’s favorability rating there ranks near the bottom among the 24 publics other than the U.S. included in the 2009 Pew Global Attitudes survey. Pakistan is one of three nations – along with the Palestinian territories and Turkey – in which fewer than one-in-five express a positive view.

Most Pakistanis consider the U.S. an enemy, while only about one-in-ten say it is a partner. Distrust of American foreign policy runs deep, and few believe the U.S. considers Pakistani interests when making policy decisions. Moreover, most think that American policy in South Asia favors Pakistan’s archrival India.

Negative attitudes toward the U.S. in Pakistan are not new – throughout this decade overall ratings for the U.S. have been consistently low. In many other nations, the U.S. received generally positive reviews at the beginning of the decade, before plummeting in 2002 and 2003, as publics around the world reacted negatively to the Iraq war and other elements of President George W. Bush’s foreign policy. However, even at the start of the decade, few Pakistanis expressed favorable views of the U.S.

The only recent Pew Global Attitudes survey in which more than one-quarter voiced a positive opinion of the U.S. was in 2006 (27% favorable), when America’s image improved slightly in Pakistan. This was tied at least in part to the fact that the U.S. provided a significant amount of aid to the country following the October 8, 2005 earthquake that struck about 50 miles outside of Islamabad, killing approximately 75,000 people.

Currently, only 16% of Pakistanis express a favorable view of the U.S., essentially unchanged from last year’s 19%, making Pakistan one of the few countries surveyed in which America’s overall image did not improve in 2009. Among the 20 nations other than the U.S. surveyed in both 2008 and 2009, the percentage offering a favorable assessment of the U.S. rose in 16 and stayed about the same in four, including – in addition to Pakistan – Turkey, Russia and Poland.

The U.S. receives slightly higher ratings in Sindh (28% favorable) than in other regions, including Punjab (13%) and the North West Frontier Province (NWFP) (9%). And those who identify with the Pakistan Peoples Party (PPP) (23%), which has its political base in Sindh, tend to give the U.S. slightly higher ratings than those who identify with the Pakistan Muslim League-Nawaz (PML-N) (13%).

Slightly more than half (55%) of those surveyed think the U.S. has a great deal or a fair amount of influence in Pakistan, and among those who believe this, the overwhelmingly consensus is that America’s impact is a negative one: 78% say the U.S. is having a bad impact.

In addition to the views about the U.S. as a country, Pakistanis also tend to give the American people unfavorable ratings – 57% say they have a negative impression of Americans. Looking at the 25 nations surveyed in 2009, Pakistanis are among the least likely to say they have a favorable opinion of Americans – just 20% hold this view. Once again, the least positive views are found in Pakistan, the Palestinian territories (20%) and Turkey (14%).

Part of America’s image challenge in Pakistan is that key elements of American foreign policy have been overwhelmingly unpopular there in recent years. Reservations about American policy and America’s role in the world continue to be widespread in the Obama era. As noted elsewhere in this report, American anti-terrorism efforts are widely unpopular and most Pakistanis want U.S. and NATO forces out of neighboring Afghanistan (see Chapter 1).

More broadly, the U.S. is seen as acting unilaterally in world affairs. Fewer than one-in-four (22%) Pakistanis believe the U.S. considers the interests of countries like theirs a great deal or a fair amount when making foreign policy decisions. More than half (53%) say it does not consider their interests much or at all, while 26% do not offer an opinion.

Relations with the U.S. 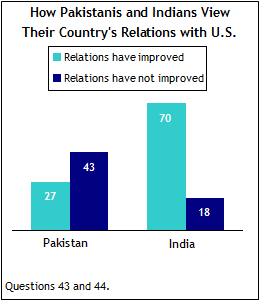 Indians are more likely than Pakistanis to say that U.S.-Pakistani relations have improved recently. Roughly half (48%) in India think relations between the U.S. and Pakistan have gotten better, while 38% say they have not.

When asked about relations between their own country and the U.S., however, far more Indians (70%) say they have improved in the last few years, while just 18% say they have not improved and 12% do not know.

While few Pakistanis think relations between their country and the U.S. have been getting better, most want the relationship to improve. Just over half say that improving relations with the U.S. is either very (22%) or somewhat (31%) important. Only about three-in-ten say that better relations are either not too important (18%) or not at all important (11%), while 18% offer no response. 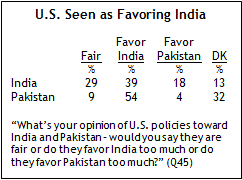 A majority of Pakistanis (54%) believe U.S. policy in South Asia tends to favor India. Only 4% think American policy favors Pakistan, while 9% say the U.S. is fair and 32% offer no opinion.

In India, about four-in-ten (39%) say the U.S. favors their country, more than double the proportion saying that American policy leans toward Pakistan (18%). 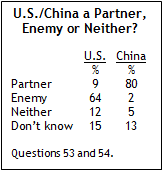 More than six-in-ten (64%) Pakistanis consider the U.S. an enemy of their country, while only 9% say it is a partner. Pakistan is one of only two nations in the Pew Global Attitudes survey where majorities perceive the U.S. as an enemy. The other is the Palestinian territories, where 77% see the U.S. as an enemy. 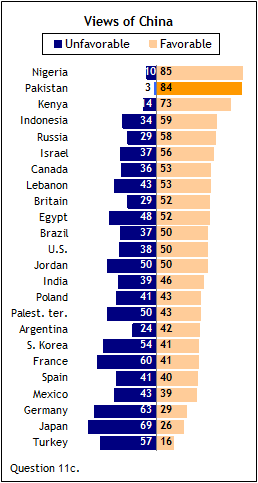 Ethnic Sindhis (33% enemy), those who live in the Sindh region (45%), and those who identify with the PPP (53%) are less likely than others to consider the U.S. an enemy.

Views about China are very different – eight-in-ten Pakistanis see China as a partner, while only 2% consider it an enemy.

Among the 24 nations other than China included in the survey, Pakistan gives China some of its highest ratings. Fully 84% of Pakistanis express a favorable view of China, up from 76% in 2008. Only Nigerians – at 85% favorable – give China a more positive review.