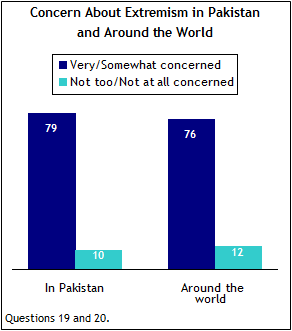 Pakistanis remain concerned about the rise of Islamic extremism in their country and around the world, and views of Osama bin Laden, al Qaeda and the Taliban have grown more negative since last year. In addition, a growing percentage of those who think there is a struggle between groups who want to modernize Pakistan and Islamic fundamentalists say they identify with the modernizers. And the view that suicide bombing is never justified is close to unanimous.

Opinions about how to handle the threat of extremism are mixed. A majority opposes U.S.-led efforts to fight terrorism. However, there is support for using the Pakistani army to fight extremist groups in parts of the country and for financial and intelligence assistance from the United States. About half support U.S. missile strikes against leaders of extremist groups, but large majorities of Pakistanis who have heard about the ongoing drone missile attacks think they are a bad thing and that they are being conducted by the United States without the approval of the Pakistani government.

Nearly eight-in-ten Pakistanis (79%) are concerned about the rise of Islamic extremism in their country, and 69% worry that extremist groups could take control of Pakistan. These concerns are widespread across demographic and ethnic groups as well as in Punjab, Sindh and the North West Frontier Province (NWFP). 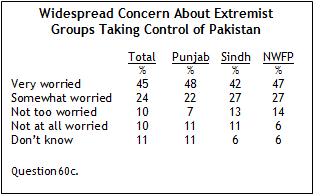 In the NWFP, a hotbed of militant activity which borders Afghanistan, about three-quarters (74%) worry that extremist groups could take control of Pakistan, including nearly half (47%) who say they are very worried about this possibility. Similarly, 70% in Punjab and 69% in Sindh worry about extremists taking over.

Concern about extremism among Pakistanis has increased somewhat over the past year. Still, overwhelming majorities already expressed concern about the rise of Islamic extremism in their country (72% in 2008 and 74% in 2006) and around the world (73% in 2008 and 71% in 2006) in recent Pew Global Attitudes surveys. 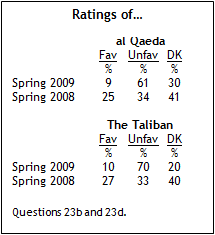 Views of al Qaeda and the Taliban are much more negative than they were a year ago. In 2008, about a quarter of Pakistanis said they had a favorable opinion of al Qaeda (25%) and the Taliban (27%), and about one-third viewed each group unfavorably (34% and 33%, respectively). The image of these groups has slipped across regions as well as across educational and income groups.2 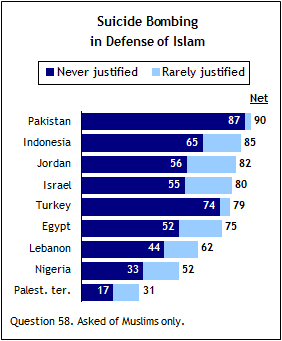 Opposition to suicide bombing and other forms of violence against civilian targets is nearly unanimous among Pakistani Muslims. Nine-in-ten say such acts are rarely or never justified in order to defend Islam from its enemies, with nearly all of those saying it is never justified. This sentiment holds true across demographic, regional and partisan groups.

Among Muslims in the nine countries surveyed where there are sizable Muslim populations, those in Pakistan are the most opposed to suicide bombing. Significant majorities in Indonesia (85%), Jordan (82%), Israel (80%), Turkey (79%), Egypt (75%), and Lebanon (62%) also say such acts of violence are rarely or never justified. However, in no other country is the percentage expressing that view as high as in Pakistan, and the percentage of Muslims in Pakistan who say suicide bombing is never justified is much higher compared with other Muslim publics. 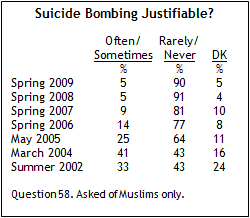 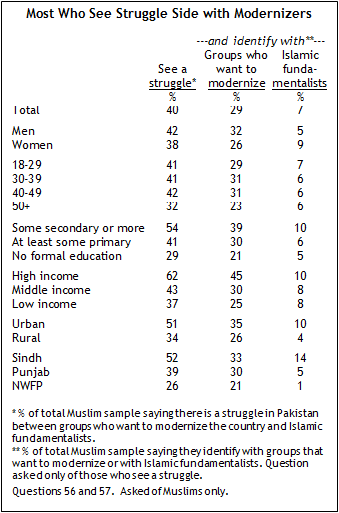 The view that there is a struggle between modernizers and fundamentalists is more prevalent among those with higher incomes; 62% of affluent Pakistani Muslims see a struggle, compared with 43% of those with middle incomes and 37% of those with low incomes. Similarly, those who are better educated are more likely to say there is a struggle between those who want to modernize Pakistan and Islamic fundamentalists. There are no significant differences of opinion on this matter, however, between men and women or across age groups.

In Sindh, more than half of Muslims (52%) say there is a struggle between modernizers and fundamentalists in Pakistan. By contrast, 39% in Punjab and 26% in the NWFP share that view (fully 63% in the NWFP did not offer an opinion).

Identification with groups that want to modernize Pakistan is now more common across all key demographic groups, but the change has been greatest among those with no formal education. In 2008, nearly six-in-ten (58%) Muslims with no formal education who said there was a struggle sided with Islamic fundamentalists and 37% sided with modernizers. In the current survey, about three-quarters (74%) in that group identify with those who want to modernize and just 16% identifies with fundamentalists. 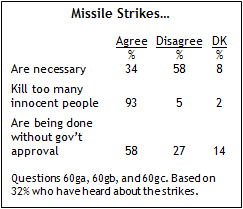 Despite their concerns about the rise of Islamic extremism and the threat it poses to their country, Pakistanis who have heard about ongoing missile strikes from drone aircraft that target leaders of extremist groups broadly oppose such attacks.4 About six-in-ten (62%) among those who have heard of the missile strikes say they are a very bad thing, and another 33% say they are a bad thing. 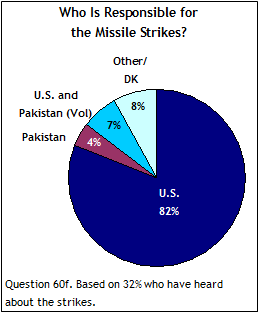 More than half in Pakistan (56%) oppose U.S.-led efforts to fight terrorism and 72% think the U.S. and NATO should remove their military troops from Afghanistan as soon as possible. Yet, many see a role for the United States in the battle against extremism. 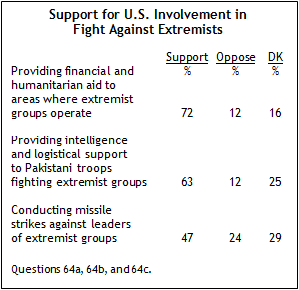 Pakistanis are less supportive of the U.S. taking part in military action. Still, after being asked about ways in which the U.S. can assist Pakistan in the fight against extremism, nearly half (47%) say they would favor the U.S. conducting missile strikes against leaders of extremist groups.