The current survey reveals ongoing concerns about a number of threats and conflicts within the Muslim world. Among the eight Muslim publics included in the survey, there is widespread concern about the rise of Islamic extremism both within their countries and in the world more broadly. Many also see a conflict taking place within their countries between modernizers and Islamic fundamentalists. And there is a sense among most that conflicts over the last few years between Sunni and Shia Muslims in Iraq are not limited to that country; instead, they are seen as part of a broader clash within the world of Islam.

Since 2002, the acceptability of suicide bombing in defense of Islam has fallen sharply across Muslim publics. There also have been steep declines in the proportions expressing confidence in Osama bin Laden. 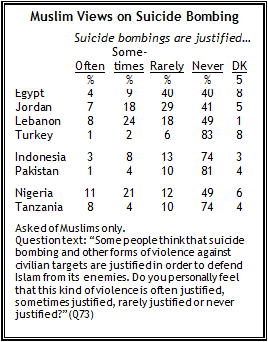 Among the Muslim publics included in this year’s survey, majorities or pluralities in nearly every country say suicide bombing and other forms of violence against civilians can never be justified to defend Islam from its enemies. Still, in several countries significant minorities do endorse such tactics.

In Lebanon, 32% of Muslims say that suicide bombing and other attacks on civilians are often (8%) or sometimes (24%) justified in the defense of Islam. More than twice as many Lebanese Shia as Sunnis say such attacks are often or sometimes justified (46% vs. 21%). 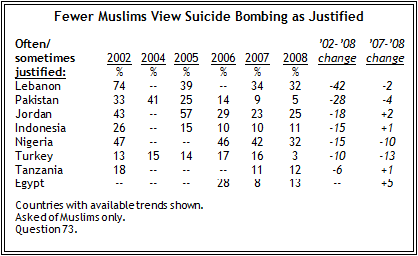 Since Pew first asked this question six years ago, the percentage of Muslims saying suicide bombing can often or sometimes be justified has declined significantly in all seven countries where trends from 2002 are available.

Since 2002, decreases of 15 percentage points or more have occurred in five of these seven countries: Lebanon (-42 points), Pakistan (-28), Jordan (-18), Indonesia (-15) and Nigeria (-15). Just since last year, there have been notable declines in Turkey (-13 points), Nigeria (-10) and Pakistan (-4). The only country where support has increased significantly since last year’s Pew poll is Egypt (+5), although the number of Egyptians who believe suicide attacks can often or sometimes be justified remains relatively low at 13%.

There are few differences according to age or gender on this question, although Muslims under age 50 in both Nigeria (31%) and Jordan (24%) are less likely than those 50 and older (43% in Nigeria, 29% in Jordan) to describe this type of violence as often or sometimes justifiable. 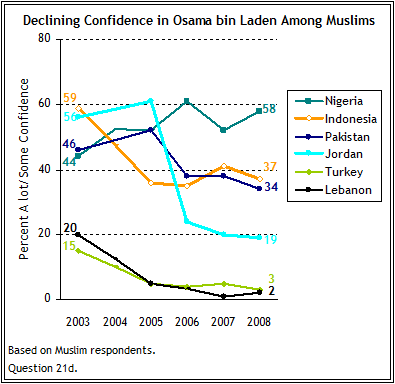 Support for Osama bin Laden has also declined in recent years. For instance, only 2% of Lebanese Muslims currently say they have a lot or some confidence in bin Laden to do the right thing in world affairs, down from 20% in 2003. Similarly, just 3% now voice confidence in the al Qaeda leader in Turkey, down from 15% five years ago.

The most dramatic drop in support for bin Laden has occurred in Jordan – six-in-ten Jordanian Muslims expressed confidence in bin Laden just three years ago, but today only 19% do so.

Disturbingly high numbers of Muslims in Indonesia (37%) and Pakistan (34%) have confidence in the terrorist leader, but in both countries support for bin Laden is considerably lower now than it was five years ago.

The only country where a majority of Muslims view him positively is Nigeria (58% a lot or some confidence). And Nigeria is the only country in which positive views of bin Laden have become more common since 2003.

Mixed Views of Hamas and Hezbollah 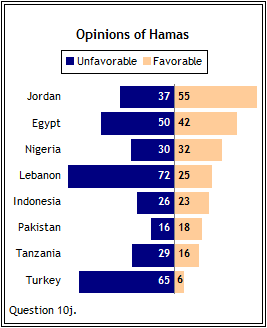 A majority in only one country – Jordan – holds a favorable opinion of the radical Palestinian organization Hamas (55%). Elsewhere, opinions are negative or mixed.

In the other Arab nations included in the survey, Hamas does not fair as well. For instance, half of Egyptians express an unfavorable view of the organization.

In Lebanon, upwards of seven-in-ten (72%) have a negative view, although opinions differ greatly between the country’s Shia and Sunni communities, and these differences have only become sharper since 2007. Hamas – a predominantly Sunni organization – is currently viewed favorably by 64% of Shia, a 14 percentage point increase from last year. But among Lebanese Sunnis, Hamas remains overwhelmingly unpopular – 83% have an unfavorable view of the organization, an increase from 76% in 2007. Lebanese Christians overwhelmingly express negative opinions of Hamas (90% unfavorable).

Turks have become more negative towards Hamas since last year. Roughly two-thirds (65%) say they have an unfavorable opinion, compared with 54% in 2007. Only a handful of Turks rate Hamas favorably (6%).

Outside of the Middle East, Hamas is a less salient issue, and large numbers of Muslims in Nigeria, Indonesia, Pakistan, and Tanzania are unable to offer an opinion about the Palestinian group. 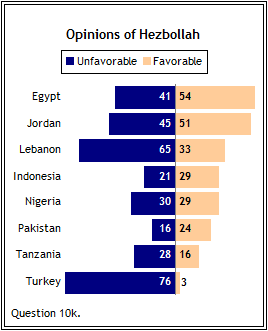 Overall, most Lebanese take a dim view of Hezbollah, the Islamic Shia political and military organization based in Lebanon. A solid majority (65%) of Lebanese say they have an unfavorable view of this organization, but opinions are deeply divided along religious lines. Hezbollah continues to receive tremendous support from Lebanon’s Shia community – a remarkably high 96% hold a favorable view, up from 85% last year. On the other hand, nearly the same percentage of Lebanese Sunnis (95% unfavorable) and Christians (87% unfavorable) express a negative opinion of the movement.

In the other two Arab countries surveyed, slim majorities hold a favorable view of Hezbollah – 54% of Egyptians and 51% of Jordanians express a positive opinion.

Once again, in the predominantly Muslim countries in Asia and Africa, substantial percentages – 40% or more – are unable to provide a response.

Among Nigerians, views divide sharply along religious lines – one-half of Nigerian Muslims have a favorable view of Hezbollah, compared with just 9% of Christians.

Worries about Islamic extremism are pervasive among nations with sizeable Muslim populations. Majorities in seven of the eight nations where this question was asked are concerned about the rise of Islamic extremism in the world today.

Seven-in-ten or more are concerned in Indonesia, Pakistan, Tanzania and Lebanon. And more than half of Pakistanis and Tanzanians are very concerned. Turkey is the exception – only 37% of Turks say they are concerned.

Similar proportions say they are concerned about Islamic extremism in their countries. Majorities in seven of eight countries are very or somewhat concerned about the rise of extremism in their country, and worries are especially widespread in Lebanon (78%), Pakistan (72%) and Egypt (72%). Once more, Turkey is the exception – only about four-in-ten Turks (41%) are very or somewhat concerned.

The intensity of concern is particularly strong in Pakistan, a country where armed clashes between government forces and militant groups are ongoing. Just over half of Pakistanis (54%) are very concerned about extremism in their country. 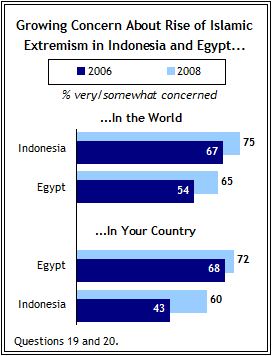 Worries about extremism around the world and in the survey countries themselves has mostly remained stable since the last time Pew asked these questions in 2006. However, concerns have risen significantly in two countries: Indonesia and Egypt.

Among Egyptians, 65% are concerned about extremism around the world, an 11 point increase since 2006. More than seven-in-ten (72%) are worried about rising extremism in their country, up from 68% two years ago. 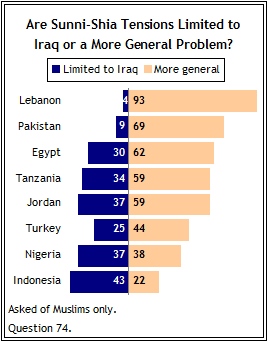 The sectarian violence in Iraq has been the most high profile conflict between Sunni and Shia Muslims over the last few years, but many believe this conflict is not limited to Iraq. Instead, in six of the eight countries where the question was asked, the balance of opinion is that tensions between Sunni and Shia are a growing problem in the Muslim world more generally.

This opinion is almost universally shared by Lebanese Muslims (93% more general problem). Perhaps indicative of the ever sharper divides between Lebanon’s Muslim communities, nine-in-ten or more among both Shia (94%) and Sunnis (90%) say that these sectarian tensions are a growing problem throughout the Muslim world.

A Struggle Between Modernizers and Fundamentalists 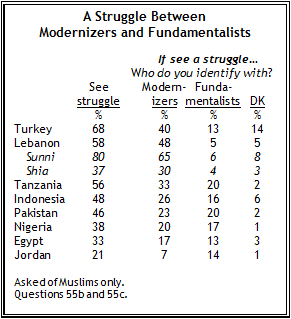 Many Muslims see a struggle in their country between groups who want to modernize the nation and Islamic fundamentalists. In three of the eight countries where this question was asked, more than half say such a struggle is taking place. Overwhelmingly, Muslims who do see a struggle tend to side with the modernizers. The only clear exception is Jordan, where more identify with fundamentalists.

The belief that a struggle is occurring is most common in Turkey, where tensions between elements of the country’s secular establishment and the AKP, the country’s ruling moderate Islamic party, have been high over the last year. Roughly two-thirds (68%) believe a clash between moderates and fundamentalists is taking place in Turkey.

Nearly six-in-ten (58%) Lebanese Muslims see a struggle in their country, although this perception is much more common among Sunnis (80%) than among Shia (37%). Both Sunnis and Shia, however, tend to side with modernizers. 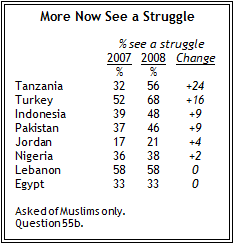 In several countries, there have been notable increases in the number of Muslims who see a conflict between modernizers and fundamentalists. In Tanzania, Turkey, Indonesia, Pakistan and Jordan, Muslims are now significantly more likely to believe such a conflict is taking place than they were last year.