Overall, respondents from the countries in the survey with sizeable Muslim populations express positive opinions about Saudi Arabia. In these nations, favorable views of the Saudi Kingdom are far more common than favorable views of other major countries, and are especially widespread in Pakistan and Jordan. Attitudes toward the U.S. are largely negative, and Iran also receives mostly unfavorable ratings.

Views of U.S. intentions toward democracy in countries with large Muslim populations are more mixed. Nigerians and Tanzanians largely trust that the U.S. favors democracy in their country while Turks and Pakistanis do not. For Pakistanis, faith in U.S. intentions has fluctuated in the last several years, but is now weaker than ever. 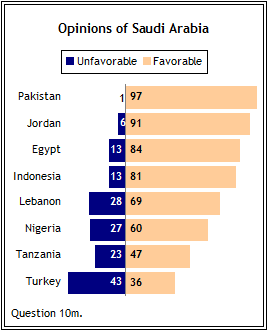 Among the nations with sizeable Muslim publics, Saudi Arabia receives more positive ratings than any other major country asked about in the survey – China, Pakistan, Iran, India and the U.S. Across these countries, the median percentage giving Saudi Arabia a positive rating is 75%. China receives the second best ratings with a median of 59% while Pakistan is not too far behind (49% median). By contrast, the U.S. ranks dead last in positive marks. The median percentage with a favorable view of the U.S. is 30%.

Attitudes toward largely Shia Iran are far less positive than toward predominantly Sunni Saudi Arabia. Majorities in only two of these eight Muslim nations – Pakistan and Indonesia – hold favorable views of Iran. About two-thirds in neighboring Pakistan (67%) express positive views of Iran, and just over half of Indonesians (53%) express the same view.

Few in Turkey hold favorable views of any of the major countries asked about in the survey, though more hold positive views of Saudi Arabia (36%) and Pakistan (36%) than any other country. Only 12% in Turkey give the U.S. a favorable rating.

Does the U.S. Favor or Oppose Democracy in Muslim Publics? 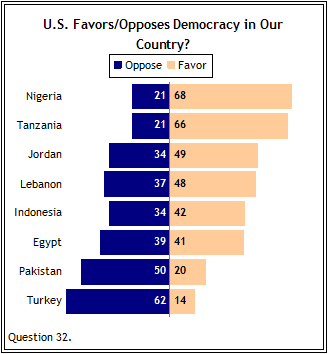 Views of whether the U.S. government favors or opposes democracy in their country are mixed in these eight countries with sizeable Muslim populations.

Nigerians (68%) and Tanzanians (66%) are largely convinced that the U.S. favors democracy in their respective countries. Just under half feel the same among Jordanians (49%) and Lebanese (48%).

Indonesians are, on balance, more convinced the U.S. favors (42%) than opposes (34%) democracy in their country, though many say they do not know (24%). Egyptians are split on American intentions – 39% think the U.S. opposes democracy and 41% believe it favors democracy. 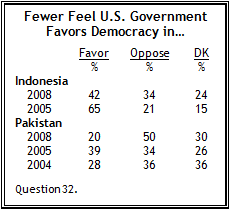 A majority of Sunni Muslims (52%) in Lebanon trust that the U.S. favors democracy in their country while most Shia do not (81%).

Views of U.S. interests in democracy in Indonesia and Pakistan have fluctuated somewhat in recent years. In 2005, nearly two-thirds (65%) of Indonesians felt that the U.S. favored democracy in their country while just 42% feel that way in 2008. Similarly, fewer Pakistanis are convinced of a U.S. interest now (20%) than in 2005 (39%).