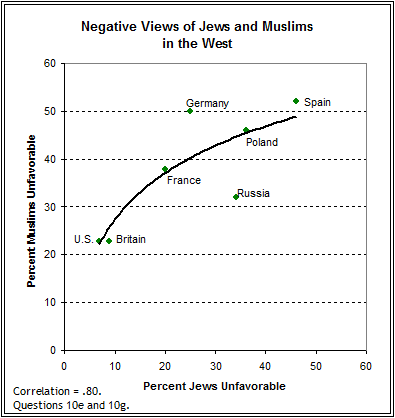 In many countries, negative attitudes toward Muslims and Jews are common, and unfavorable views toward both groups have increased in Europe in recent years.

Attitudes toward Jews are on balance negative in most of the countries included on the survey, and they are overwhelmingly negative in many predominantly Muslim countries. In Western Europe, a region of the world where opinions of Jews have generally been positive in recent years, anti-Semitism appears to be on the rise. This is especially true in Spain, although increases have also occurred elsewhere on the continent. The rise in unfavorable views has occurred mostly among less educated and older Western Europeans. Those on both the political left and right in Europe voice more negative opinions of Jews than those in the center.

Opinions about Muslims vary considerably across regions, and even within regions. Many in Asia and Latin America hold a negative view. In the West, less than a quarter of those surveyed in Britain and the United States say they have unfavorable impressions of Muslims, compared with about half in Spain and Germany. In several European countries included in the survey, Muslims receive more negative ratings now than in 2005.

Views about Christians are decidedly more positive – in the vast majority of publics surveyed, Christians on balance receive favorable ratings. Still there are some exceptions, most notably Turkey, where unfavorable views of Christians – as well as unfavorable views of Jews – have surged over the last four years. Negative attitudes toward Christians have also become more common in France and Spain. In Spain, negative attitudes toward all three religions have increased. In 2004, 4% gave unfavorable ratings to Christians, Jews and Muslims; today, 16% of Spanish respondents express negative opinions of all three groups. 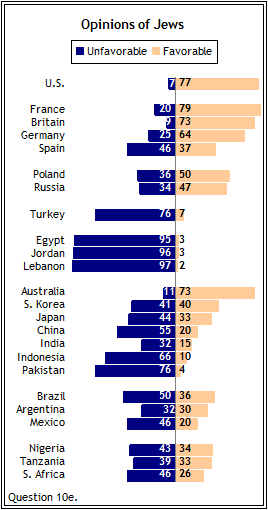 In many nations in Asia, Latin America, and Africa, large numbers are unable to offer an opinion – indeed, a majority in India (53%) and a plurality in Argentina (38%) do not give an opinion.

Negative views are most common in the three predominantly Arab nations included in the survey. Only 2% of Lebanese have a favorable opinion of Jews, while 97% hold an unfavorable view, including 99% among both Sunni and Shia Muslims, as well as 95% of the country’s Christians. In Jordan (96% unfavorable) and Egypt (95%) opinions also are nearly unanimously negative. This pattern is not new, however; previous Pew surveys in these three countries have found 95% or more expressing unfavorable views of Jews.

Negative attitudes also are common in the other predominantly Muslim countries included in the survey. In both Pakistan and Turkey, 76% express unfavorable opinions of Jews, while fewer than one-in-ten have a positive impression. Views are only slightly less negative in Indonesia (66% unfavorable, 10% favorable).

The picture is generally quite different in Europe and the United States. Among the 24 countries surveyed, negative sentiments are least common in the U.S., where only 7% hold a negative opinion of Jews. In Europe, positive views consistently outweigh negative ones, with the exception of Spain (46% unfavorable, 37% favorable).

Negative Opinions of Jews on the Rise in Europe

Although negative opinions of Jews are less common in Europe than in other regions, they have increased in recent years. The trend has been particularly dramatic in Spain, where unfavorable views have more than doubled over the last three years, rising from 21% in 2005 to 46% in the current survey. 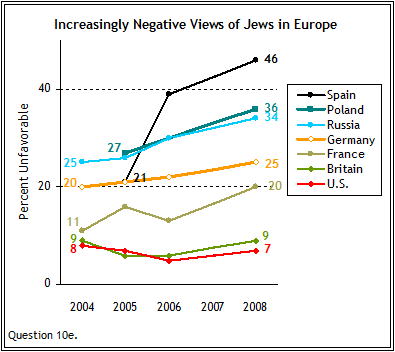 German and French attitudes have also grown somewhat more negative. Currently, 25% of Germans have an unfavorable opinion of Jews, up from 20% in 2004. Over the same period, unfavorable views in France have increased from 11% to 20%.

There are also signs of increased negativity in Eastern Europe. About one-in-three Russians (34%) voice an unfavorable view, up from 25% in 2004. In Poland 36% now hold a negative opinion of Jews, compared with 27% in 2005. Britain and the United States are exceptions to this trend – in both countries, fewer than 10% have expressed negative sentiments about Jews since 2004.

Negative attitudes toward Jews are more common among older and less educated Western Europeans, and much of the rise in negative views over the last few years has taken place among these two groups. 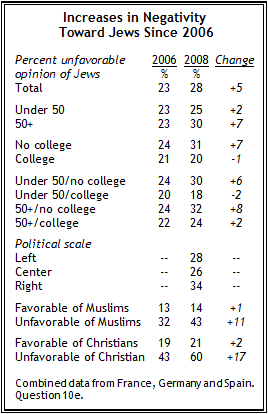 Looking at combined data from France, Germany, and Spain shows that those ages 50 and older are somewhat more likely to have an unfavorable opinion of Jews than are those younger than 50.2 And while unfavorable views have increased by two percentage points among those under 50 since 2006, they have increased by seven points among older Europeans in these three countries.

Negative views are also more common among the less educated. Nearly one-third (31%) of those in France, Germany and Spain who did not attend college have an unfavorable opinion of Jews, compared with just 20% of those who did. Among those with a college education, there has been virtually no change (-1) in unfavorable views since 2006, while there has been a seven percentage point increase among those with less education.

Anti-Jewish views do not appear to be linked to religiosity in these three European countries. Unfavorable opinions of Jews are about equally prevalent among those who say religion is very, somewhat, not too, or not at all important in their personal lives. 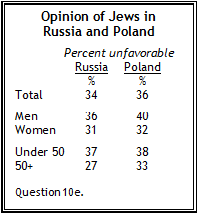 In the two Eastern European countries included in the survey, negative attitudes toward Jews are somewhat more common among men and younger people.

In contrast to Western Europe, people under age 50 are more negative toward Jews than those 50 and older in both of these countries. And since 2005, negative attitudes have increased significantly among younger Russians and Poles. Three years ago, 29% of Russians younger than 50 expressed negative opinions of Jews, compared with 37% today. One-quarter of 18-49 year-old Poles said they had an unfavorable view in 2005; today it is 38%.

Attitudes toward Jews have turned considerably more negative in Turkey in recent years. About half of Turks (49%) held an unfavorable view in 2004, while today roughly three-in-four (76%) express this sentiment. In the last two years alone, unfavorable views have risen from 65% to 76%.

Turkish opinion on this issue is generally quite consistent across demographic groups. For example, 77% of those under age 50 have an unfavorable opinion of Jews, as do 75% of older Turks. Similarly, people with a college education (78%) are about as likely to express negative views as those who have not attended college (76%). 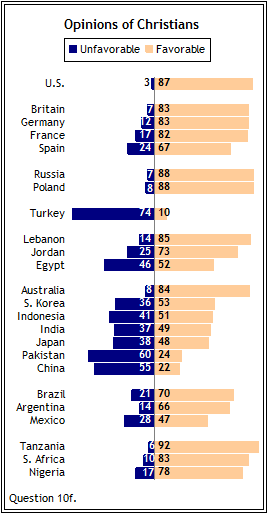 The only countries surveyed in which majorities express a negative view of Christians are Turkey (74% unfavorable), Pakistan (60%) and China (55%).

Negative attitudes toward Christians have been on the rise in a few countries over the last several years, most dramatically in Turkey. The trend in Turkish opinions about Christians has been very similar to the trend regarding Jews. In 2004, about half (52%) of Turks gave Christians an unfavorable rating; today roughly three-in-four (74%) hold this view.

The Indian public has become somewhat more negative toward Christians. In 2005, 19% of Indians had a negative opinion of Christians; now 37% do. Unfavorable views of Christians are also up in Indonesia, rising from 32% in 2006 to 41% today. 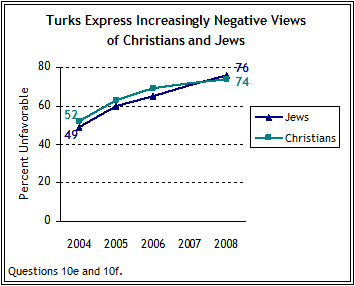 In Spain, 24% now express a negative opinion of Christians, up from 15% just two years ago.

There has also been an increase in negative views of Christians in France, where 17% now express an unfavorable opinion, an eight percentage point rise from 2004.

In Germany, unfavorable ratings of Christians have declined slightly since 2004, from 16% to 12%. In Russia, Poland and Britain, fewer than 15% have a negative view of Christians, and opinions have been relatively steady over the last four years. 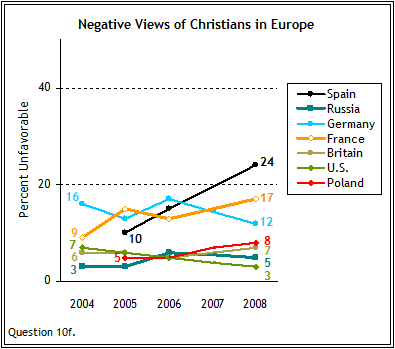 Negative attitudes toward Christians have declined in Jordan. Two years ago, 39% of Jordanians expressed an unfavorable view; today, 25% hold this view. 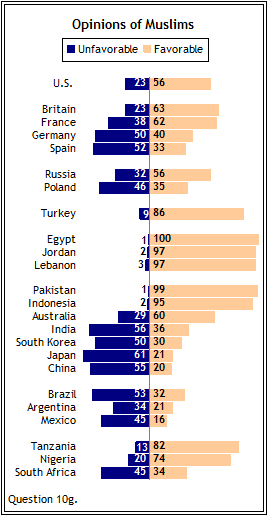 Negative views of Muslims are especially widespread in parts of Asia: 61% of Japanese, 56% of Indians, 55% of Chinese, and 50% of South Koreans say they have a negative impression of Muslims.

On balance, opinions also tend to be negative in Latin America, especially Brazil, where a slim majority (53%) holds an unfavorable view. Large number of Argentines (44%) and Mexicans (38%) did not offer an opinion of Muslims

In the West, attitudes toward Muslims are mixed. Majorities in Great Britain, France, and the United States have favorable views of Muslims, while opinions are more negative in Spain, Germany, and Poland. 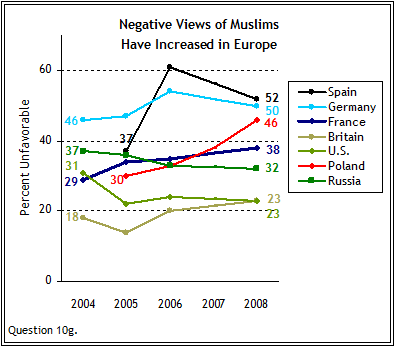 In Great Britain, France, Poland and Spain – attitudes toward Muslims are notably more negative today than in 2005. However, in the two EU countries with the most negative perspectives, Spain and Germany, unfavorable views have actually declined slightly since 2006. Opinions have been particularly volatile in Spain; the share of the Spanish public holding a negative view of Muslims jumped from 37% in 2005 to 61% in 2006 before falling to 52% this year. The trend in Germany has followed a similar, although less volatile, pattern, rising from 47% unfavorable in 2005 to 54% in 2006, and then dropping to 50% in 2008.

On the other hand, France and Britain have seen a steady, albeit slight, increase in unfavorable opinions toward Muslims since 2005. In France, unfavorable opinions have crept up from 34% three years ago to 38% today. Just 14% of the British public expressed a negative view of Muslims in 2005, compared with 23% today. Almost half of Poles (46%) now express a negative opinion of Muslims, up from 30% on the 2005 survey (unlike the four other EU countries, Poland was not surveyed in 2006). 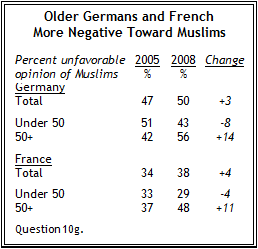 In Germany and France, trends among older and younger people have moved in opposite directions since 2005. Three years ago, 51% of Germans under age 50 held a negative view of Muslims, compared with 43% today. In contrast, unfavorable opinions have increased among those 50 and older, rising from 42% in 2005 to 56% now.

Similarly, negative ratings have declined among French respondents younger than 50 (from 33% to 29%), while increasing among those ages 50 and older (from 37% to 48%).

Negative ratings of Muslims have increased notably in one country outside of the West: India. A clear majority of Indians (56%) now voice a negative opinion, up from 51% in 2006 and 43% in 2005.

Similarities in European Views of Muslims and Jews 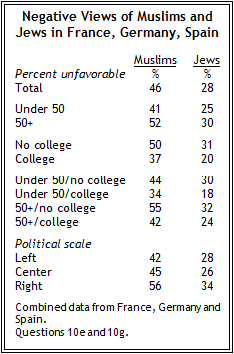 There are some strong similarities between Western European attitudes toward Muslims and Jews. In both cases, older and less educated people express more negative opinions, as do those who place themselves near the right end of the ideological spectrum.

Looking again at combined data from France, Germany, and Spain, unfavorable ratings of Muslims are more common among people over age 50 and those with less than a college education – the same groups that are particularly likely to hold negative views of Jews.

And, as with opinions regarding Jews, attitudes towards Muslims are most negative on the right – a majority (56%) of respondents in these three countries who place themselves on the right of the political spectrum hold an unfavorable view of Muslims, compared with 42% of those on the left and 45% of those in the center.