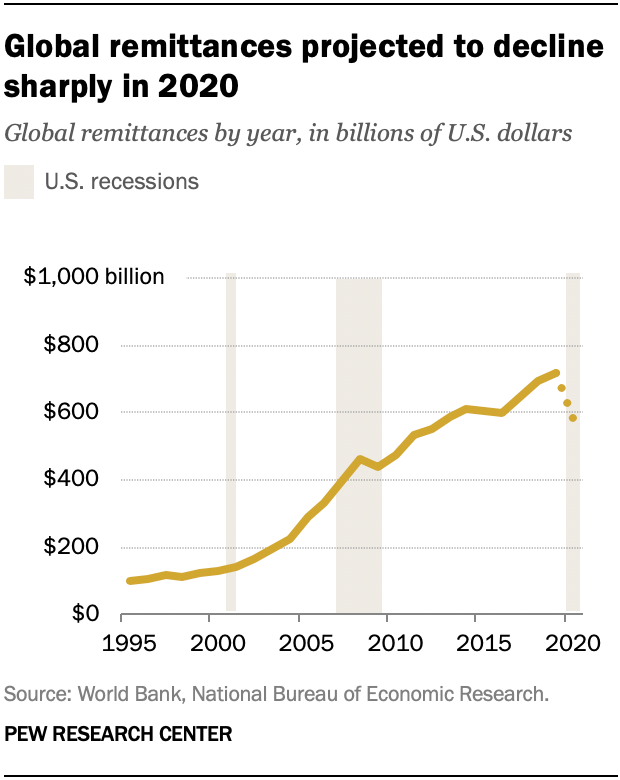 With many nations under stay-at-home orders and work restrictions due to the COVID-19 crisis, remittances – money sent by migrants to their home countries – are projected to fall by a record 20% this year. This decline, from a high of $714 billion in 2019 to an estimated $572 billion in 2020, comes as the world’s largest remittance-sending nations have experienced especially stringent lockdowns, according to a Pew Research Center analysis of data from the World Bank, Oxford University and Google.

The 10 countries that sent 61% of the world’s remittances in 2018 (the most recent year for which bilateral remittance data is available) have spent an average of 10 more days under coronavirus-related lockdowns – and experienced greater declines in physical mobility near workplaces – than other countries, the analysis shows. This may have an outsize effect on the countries that depend heavily on these nations for remittances.

To examine the effect of coronavirus lockdowns on remittances, this analysis uses global estimates of remittance flows from the World Bank; data on lockdowns from Oxford University’s Coronavirus Government Response Tracker; and data on mobility patterns near workplaces from Google’s COVID-19 Community Mobility Reports.

Oxford University’s response tracker is limited by the availability of public information about each country’s response, meaning that it is more likely to underestimate than overestimate the number of days each country spent under lockdown measures. Google’s mobility data is based on smartphone users, meaning the data may overrepresent the younger and more affluent.

The decline in remittances is projected to hit all regions of the world, as many of the 272 million international migrants lose their jobs and stop sending money home. Remittances to European and Central Asian countries the World Bank defines as low and middle income are projected to decline by 28%, while slightly smaller declines are expected for low- and middle-income nations in sub-Saharan Africa (23%), South Asia (22%), Latin America and the Caribbean (19%), and the Middle East and North Africa (20%), according to the World Bank. These projections are based on information about prevailing wages and the number of international migrants in each country. 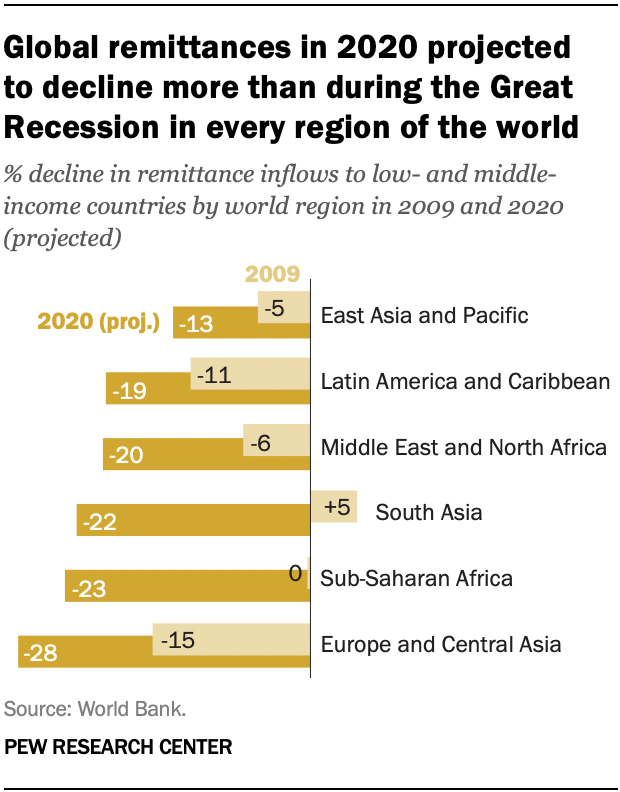 It is not unusual for worldwide remittances from migrants to ebb and flow with economic circumstances in sending countries. In 2009, during the Great Recession, global remittances declined 5% as economies shrank. And in 2016, remittances fell 1%, driven by weak growth in many countries and declining oil prices. Remittances can also increase during hard times in migrants’ home countries. For example, remittances to Yemen more than doubled between 2011 and 2019 amid a civil war in that country.

To determine the severity of a country’s COVID-19 lockdown, Pew Research Center examined two measures of workforce activity in remittance-sending countries: the number of days each country has spent under stay-at-home orders or workplace closures in 2020, according to researchers at Oxford University; and the average decline in physical mobility near workplaces during the pandemic, according to data from Google that is based on the movement patterns of smartphones. (For more on the limits of these measures, see our methodology.)

Together, these indicators paint a portrait of declining economic activity around the globe, especially in the world’s 10 largest remittance-sending countries. 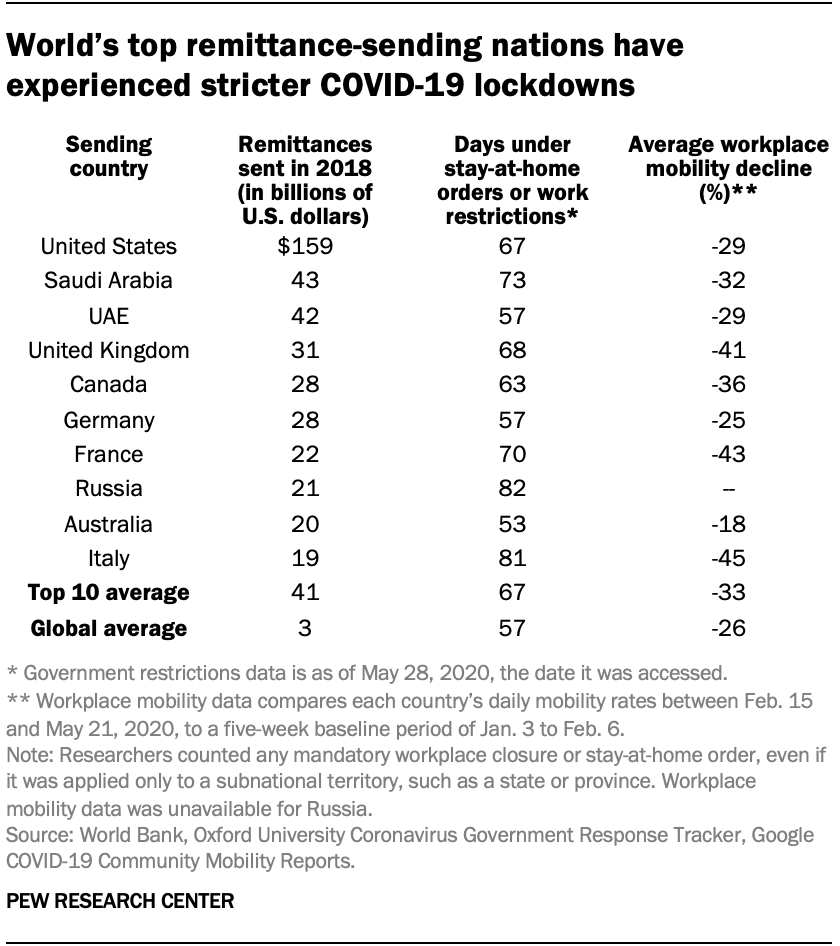 It’s important to note that many factors can influence human mobility, and that not all changes are necessarily attributable to COVID-19. For instance, this analysis covers a period that included Ramadan, a monthlong Islamic holiday during which many people’s daily habits change drastically as work slows and many restaurants close due to fasting.

Projected decline in remittances may hit some countries especially hard 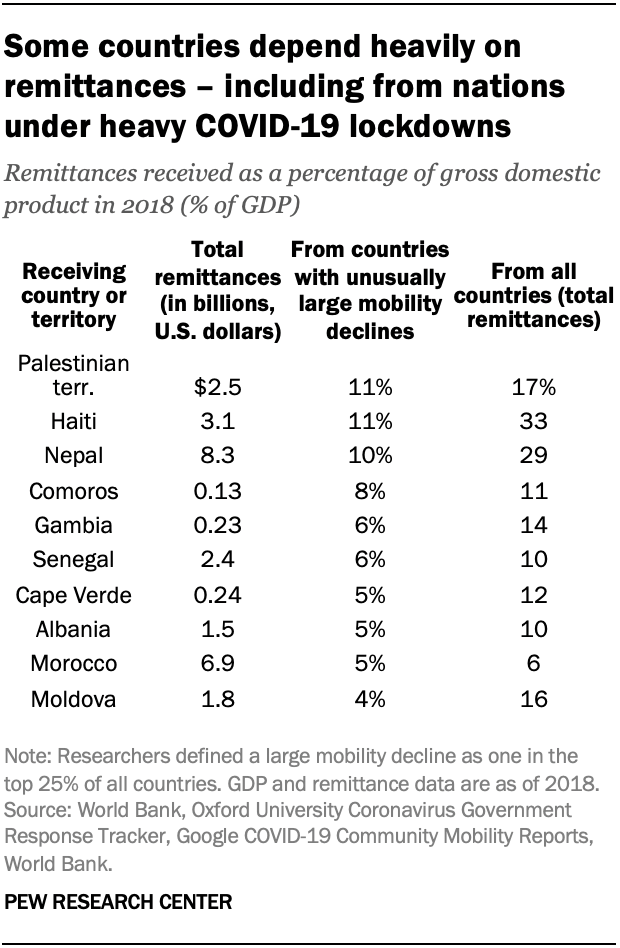 Some countries stand out for receiving an unusually large share of their gross domestic product in remittances from countries that have experienced heavy declines in mobility. For instance, 17% of GDP in the Palestinian territories came from remittances in 2018, with most of that money arriving from countries that have experienced especially large declines in mobility near workplaces this year. Jordan, which implemented one of the world’s strictest COVID-19 lockdowns in late March, sent about $1 billion in remittances to the Palestinian territories in 2018.

Other countries that could be hit hard are among the world’s most dependent on remittances. For example, Haiti’s $3.1 billion in annual remittance inflows accounted for 33% of its GDP in 2018, making it the world’s third most remittance-dependent country that year, after Tonga and Kyrgyzstan. Of Haiti’s 2018 total, one-third (equal to 11% of GDP) came from countries that experienced large declines in workplace mobility this spring.